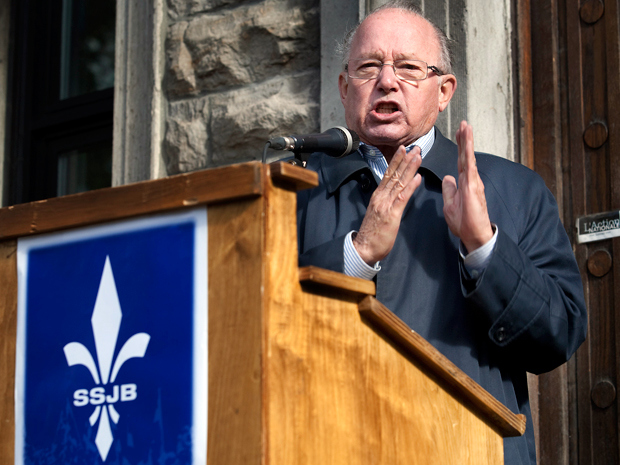 To prove I’m no francophobe, I would like to begin by congratulating Montreal’s Société Saint-Jean-Baptiste. The group that can become infuriated by the sound of a government recording offering service in English has just produced its most bilingual report in recent memory.
Mind you, the English peppered throughout the 25-page “United Against Francophobia” study is an attempt to show that English Canada has become a breeding ground for Quebec hatred since the Parti Québécois’ 2012 election.
The National Post is frequently quoted for its supposedly incendiary commentary, as is Montreal’s The Gazette, Maclean’s magazine and The Globe and Mail, among others.
A statement signed by 101 Quebecers, including former PQ premier Bernard Landry, says the anti-Quebec insults have reached a “rare and troubling intensity” during the debate over the government’s proposed charter of values.
“These labels attached to francophones sustain lasting prejudices,” the statement says. “These abusive accusations create division and provoke fear and mistrust among new arrivals and anglophones, alienating them from Quebec or French-Canadian society.”
It sounds serious until you take a closer look at the source material. By the eighth page, the report’s authors have moved from mainstream media reports to the “grim findings” discovered scrawled on the walls of “the washrooms of popular Montreal downtown restaurants.”
Graffiti on election signs is catalogued, as is a swastika scratched on a statue of Camille Laurin, the father of Quebec’s language law, Bill 101. The most vitriolic comments and images come from such social network sites as Facebook and Twitter, where anonymous users are found to have uttered threats and said disgusting things about Premier Pauline Marois. During a news conference Thursday, Mr. Landry and other signatories of the declaration decrying francophobia stood solemnly in front of a huge photo found on the Internet that depicted Ms. Marois as Adolf Hitler.
Yes, people use the Internet to post tasteless images and say disturbing things. But the comments of a handful of anonymous nutcases is not exactly evidence of the widespread “discourse of intimidation and contempt” that the Société Saint-Jean-Baptiste claims to have uncovered.
Examining the offending comments taken from mainstream media sources, the worst are harsh policy critiques while others are fairly tame. My own writing warranted a mention for a 2012 article in which I quoted professor Daniel Weinstock saying, “The PQ policies are intolerant, but they’re not racist.” Others were singled out for using such words as “odious,” “discriminatory” and “xenophobia.” The authors reached deep into the vault for examples, citing a 1989 Nazi reference in a Toronto Sun column. The Gazette’s Josh Freed was taken to task for a 2009 humour column in which he called the Société Saint-Jean-Baptiste “nationalist dinosaurs” after they tried to block the appearance of anglophone musicians at Fête Nationale celebration.
Considering the group’s latest attempt to claim victimhood, calling them dinosaurs does seem inaccurate, if only because dinosaurs had thick skins
Considering the group’s latest attempt to claim victimhood, calling them dinosaurs does seem inaccurate, if only because dinosaurs had thick skins.
Throwing together online comments, bathroom graffiti and legitimate policy criticism to demonstrate an outbreak of Quebec-bashing was a stretch, but the declaration goes farther. It suggests the critiques in the English-language media played a role in the 2012 election night shooting at the PQ’s victory party that left a stagehand dead.
“Many of these media perhaps should be examining their consciences,” it says. “We will probably never know if there was a causal link between the attack and murder perpetrated the night of the Parti Québécois election on Sept. 4, 2012, and the francophobic campaign spread in certain media, but one thing is for certain: it did not contribute to and is still not contributing to lowering the tension.”
For the most part, the 101 “personalities” who signed the declaration are the usual suspects – former union leader Gérald Larose, former PQ MNA Pierre Curzi, singer Paul Piché. But to have a former premier like Mr. Landry endorsing such nonsense is remarkable. You could almost say it amounts to anglophobia.

Graeme Hamilton: No mystery why Quebec grocer would think she could ban employees from speaking English