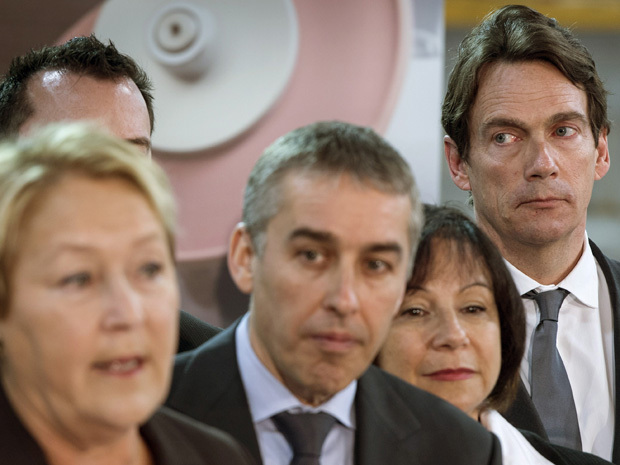 As he stood with raised fist and declared his intention “to make Quebec a country,” Pierre Karl Péladeau made clear Sunday what his new leader, Pauline Marois, has been doing her best to muddy. For the Parti Québécois, the April 7 election is about winning a majority so it can hold another sovereignty referendum.
Mr. Péladeau, the billionaire former chief executive of Quebecor Inc., would not be making the leap to run for the PQ were he not persuaded a major role awaits him in the push for independence, which he calls part of his “most intimate and profound values.”
Bucking the tendency for Quebec businessmen to align with the federalists, Mr. Péladeau has added business heft to the separatist team. But on Monday he told an interviewer that he is not entering politics to straighten up Quebec’s sagging economy. “If it weren’t for sovereignty, you wouldn’t be there?” Paul Arcand of Montreal’s 98.5 FM asked Mr. Péladeau. “No,” he acknowledged.
His business success and the star power generated by his relationship with popular TV personality Julie Snyder (from whom he separated in January), mean Mr. Péladeau has the potential to change the face of the campaign.
A new CROP poll for the CBC, conducted last week, found the PQ and Liberals even at 36% and the Coalition Avenir Québec trailing at 17%. The PQ’s 17-point lead over the Liberals among francophone voters was enough to return them to government, but not necessarily with a majority, pollster Youri Rivest said. Ms. Marois is counting on her new recruit to push the PQ over the top.
But after the heady launch Sunday in the riding of Saint-Jérôme, where he felt the thrill of prompting chants of “We want a country” from PQ supporters, Mr. Péladeau was returned to Earth Monday.
First he learned that politics also means standing as a backdrop while Ms. Marois held a lengthy news conference in a die-casting factory. Then he was subjected to his first scrum, which by the end of the day would result in his first backtrack.
Mr. Péladeau, who stepped down as Quebecor CEO last year, resigned Sunday from his remaining corporate positions. He remains the controlling shareholder of Quebecor, whose properties include newspapers, celebrity magazines, Quebec’s main private TV network, cable distribution and book publishing.
Mr. Péladeau has said he would put his holdings in a blind trust if elected, but with instructions not to sell Quebecor “under any conditions,” he told 98.5 FM.
Critics see the arrangement as a recipe for conflict of interest should the PQ win and Mr. Péladeau be named to cabinet, because he would inevitably be involved in decisions affecting his sprawling media empire.
Ms. Marois told reporters that all rules would be “strictly followed” and the provincial ethics commissioner would have the last say on what was appropriate. Mr. Péladeau, however, had a different take, telling reporters that he would not sell Quebecor, even if told to do so by the ethics commissioner.
Monday afternoon, Mr. Péladeau issued a news release changing his tune. He said he is fully collaborating with the ethics commissioner to determine the necessary measures so he can hold office. “I am going to respect the law, the Code of ethics and conduct of the Members of the National Assembly and all directives that will be pronounced by the ethics commissioner,” he said.
In announcing Mr. Péladeau’s departure for politics Sunday, Quebecor said its newsrooms “will continue to operate fully independently” and promised election coverage “will continue to be fair and impartial.”
But Liberal leader Philippe Couillard and CAQ leader François Legault said Monday that the situation raises serious concerns. Mr. Legault said the people shaping election coverage in Quebecor newspapers remain close to Mr. Péladeau. “That worries me, and I don’t think it’s healthy for a democracy,” he said.
Mr. Couillard criticized Ms. Marois for enlisting Mr. Péladeau. “I find that Ms. Marois was reckless and irresponsible in not taking more seriously this question of possible, or perceived control of information during an election campaign,” he said.
In one sense, however, the arrival of the media mogul is a gift to the Liberals. On Monday, Ms. Marois reiterated her referendum position: “If we think that it is possible to have a referendum, we will have one, but if we think it is not the time to have one, there will not be a referendum.” The official PQ platform adopted on the weekend speaks of calling a referendum at a “time that it deems appropriate.”
As long as Ms. Marois and the party platform remain deliberately vague about the timing, it is harder for Mr. Couillard to appeal to voters’ fears of referendum turmoil. With Mr. Péladeau, the Liberals have a man on a separatist mission, and they wasted no time capitalizing. On Monday, the Liberals posted online an image of a smiling Mr. Péladeau with his fist in the air. “Determined to break up a country,” the text read.
National Post