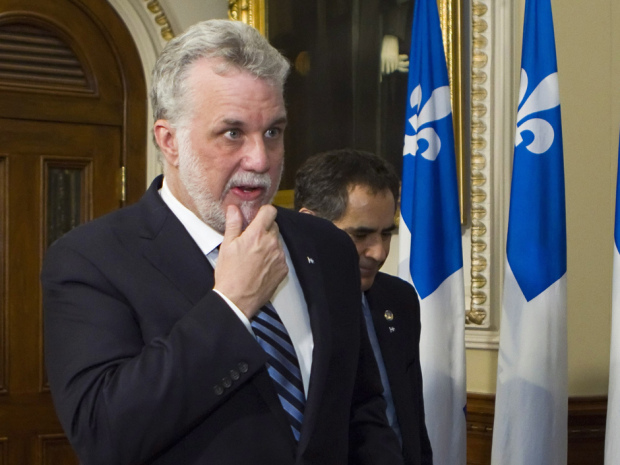 Anyone doubting that Pauline Marois’ Parti Québécois government is winning the battle of Quebec identity politics only needed to listen to Liberal leader Philippe Couillard for a few minutes Tuesday.
From the man who last September forcefully staked out an opposition position, saying the proposed charter of values would pass “over my dead body,” Mr. Couillard has been dragged onto the PQ’s preferred populist terrain.
Now, his declarations of principle are qualified. “Quebec is an open and inclusive host society,” he told reporters at one point, “but Quebecers want the values of the host society to affirm themselves and be preserved in the expression of religious freedom of all Quebecers.”
Later he described Quebecers as “profoundly attached to our fundamental rights and freedoms, as defined in our charters. That said,” he added, “the exercise of our rights and freedoms must be clearly framed.”
The occasion was the announcement of the official Liberal position, months in the making, on the values charter and the legislation to enact it, Bill 60. The Liberals had hoped the release of a definitive position would allow them to turn the page, but instead it has forced the departure of one member of caucus and further clouded where the party stands.
The Liberals remain opposed to the PQ’s proposed ban on the wearing of conspicuous religious symbols — primarily hijabs, kippas and turbans — by all of the province’s estimated 600,000 public-sector workers.
They also reject the idea of banning such symbols for people representing the state’s coercive power, such as police officers, judges and prosecutors, a decision that led MNA Fatima Houda-Pepin to leave caucus Monday night to sit as an Independent.
Ms. Houda-Pepin said her arguments that the Liberals needed to go further to counter religious fundamentalism fell on deaf ears. And in an interview Tuesday with Radio-Canada, she said the Liberal policy would prove disastrous.
“Mr. Couillard thinks he is going to solve the problem with this position; his problems are beginning,” she warned. “Yesterday I told him and my colleagues, this position that is going to be announced today is the best recipe for losing the next election.”
Mr. Couillard, who was health minister under Jean Charest, is fast learning that being leader presents a different set of challenges. With a new poll showing the PQ has ridden the charter issue to a significant lead among francophone voters, Mr. Couillard tried to echo the PQ’s identity appeal.
“Our position revolves around respect of what we are, of what defines us all collectively, historically and culturally,” he said. “I want to say again that I understand the concerns expressed by the Quebec public faced with the increase in religious fundamentalism in several countries and the fear that this phenomenon will reach our territory one day.”
While they oppose the PQ’s ban of all conspicuous religious symbols, the Liberals have said they support the principle that people giving or receiving government services must have their faces uncovered. On Tuesday the Liberals added the chador, a cloak that covers the entire body except for the face, to the burqa and niqab on the list of garments they would prohibit for state employees.
It was a day on which the PQ should have been on the defensive, as the names of Ms. Marois and her husband, Claude Blanchet, came up at the Charbonneau corruption inquiry
“These clothes, besides the question of the face, are also manifestations of a situation of oppression of the woman and of exclusion,” Mr. Couillard said.
Asked whether he feared such a ban might be declared unconstitutional, Mr. Couillard offered a strange analogy: dress codes that prohibit girls from wearing clothing that is too revealing.
“It was accepted that school authorities … had to respect certain rules of dress,” he said. “There was never a court that gave its approval, so it’s the same thing. Something can be legal in the street, and an employer or an organization can decide that it does not conform to its mission.”
Mr. Couillard also outlined his party’s proposed rules for granting accommodations on religious grounds. Anyone seeking an accommodation will have to prove that the measure is necessary and that he has “made efforts to integrate into his workplace,” Mr. Couillard said.
It was a day on which the PQ should have been on the defensive, as the names of Ms. Marois and her husband, Claude Blanchet, came up at the Charbonneau corruption inquiry. The inquiry heard wiretap evidence that union officials felt in 2009 that they could lean on Ms. Marois, who was opposition leader at the time, and her husband to forestall an inquiry.
But instead of hammering the government, Mr. Couillard was scrambling to respond to the PQ on its terms.
National Post