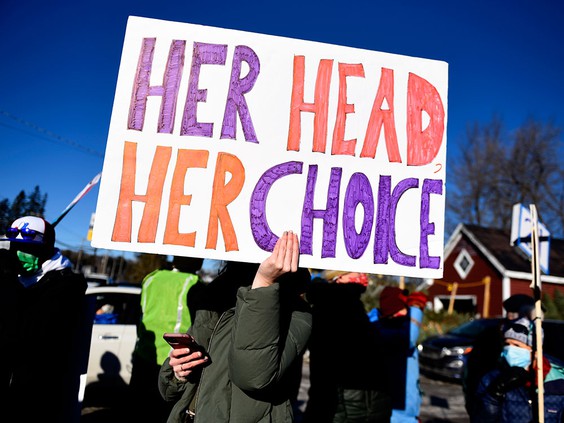 Bill 21’s separatist supporters have got exactly what they hoped for: following the reassignment of a Grade 3 teacher for wearing a hijab, English Canada’s politicians and commentators fell over each other to use the strongest words possible to condemn Quebec’s secularism law. “Cowardly,” said federal Crown-Indigenous Relations Minister Marc Miller. “Canada’s great shame,” deplored a columnist. The law “runs counter to the Universal Declaration of Human Rights,” asserted Canada’s ambassador to the UN, clearly overstepping his mandate (unless Bob Rae considers that Quebec is a foreign country).

All this noise now allows the distinct society’s nationalists to claim that the province is again subject to “Québec bashing.” As always when under “attack,” Quebecers will rally behind their government. Bill 21 will become even more entrenched into Québécois identity. Attempting to amend it, following a Supreme Court decision for example, will be impossible for any future government of the province.

I will repeat here what I have said each time I have had the opportunity to do so: I am strongly opposed to the banning of religious symbols for some public employees, including teachers. I believe this act attempts to solve a non-existent problem; feeds anti-Muslim prejudice; is discriminatory; and makes an excessive use of the notwithstanding clause. I think the prime minister, whose duty it is to protect Canadians’ fundamental rights, should have sent Bill 21 to the Supreme Court early on.

However, when English Canada’s most influential voices begin to compete as to whom will denounce the Québec National Assembly’s decisions in the toughest terms, they fall into the trap set by the province’s separatists. It helps the latter strengthen their narrative according to which the Rest of Canada (ROC) has no respect for Québec. “Bill 21 drives us to a frontal collision with the Canadian regime. What remains to be seen is how the Legault government will react,” wrote Mathieu Bock-Côté, the movement’s guru. The separatists’ hope, of course, is that Legault will eventually call for a referendum on Québec’s future.

Does this mean that English Canadians should not criticize the “Loi sur la laïcité?” Of course not. But it does mean that words should be chosen carefully. That those who have no business in this debate — an ambassador to the UN, for example — should shut up. And, more importantly, that politicians and commentators should try to establish a dialogue with Quebecers of all political stripes so that they better understand how this legislation came about and what English Canadians should do — if anything — to help those in Québec who are fighting the law.

Contrary to what is too often implied in the ROC, the vast majority of Quebecers are not racists or prejudiced. They have proven in the past that they can be extraordinarily generous towards minorities and towards people who come from foreign lands. All that Québecers ask is that they be respected in their identity and their collective choices. You may agree or not with these choices. But before declaring them “cowardly” or “shameful,” one should reflect on the origins of the policies in question. In this specific case, they would find that Québec’s unique, long and complicated relationship with the Catholic Church, plus Quebecers’ strong commitment towards gender equality, are unavoidable parts of the equation. These may not be justification enough; but they are coherent explanations.

Bill 21 will be amended when a majority of Quebecers decide so, not because the ROC’s pundits scream their indignation. If ever the Supreme Court declares the act unconstitutional, the anger and frustration in Québec will reach levels last seen when the Meech Lake Accord failed. At the time, support for separation rose to over 60 per cent. Fortunately, the province was governed by a supremely skillful federalist premier (Robert Bourassa).

Legault is also a consummate leader. But he is a separatist.

As former premier Jean Charest likes to say, “We’ve played in this movie before.” English Canada’s stand of moral superiority reminds us of other moments in our common existence where a deep misunderstanding, combined with the lack of dialogue and excessive language, grew into a crisis that threatened Canada’s existence. Who wants to live through that again?

In the debate on Bill 21, we should all remember Wilfrid Laurier’s “sunny ways.” English Canada can blow and rage, but this will not convince Quebecers to let go of their coat. The only way out is to engage in a respectful dialogue, and hope that with time, Québec will come to the conclusion that the law’s damages are larger than its benefits. Dialogue, moderation, compromise: this is how our country was built. I am confident that this is how it will continue to grow, peaceful and prosperous.