Graeme Hamilton: No mystery why Quebec grocer would think she could ban employees from speaking English 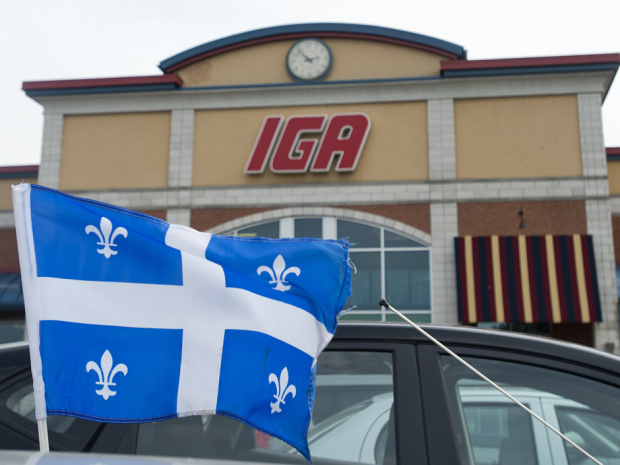 MONTREAL – Battling bad publicity generated Thursday by news that employees at one of its supermarkets in Quebec are prohibited from speaking English, Sobeys chief executive officer Marc Poulin called the store’s actions “unacceptable” and “totally unexplainable.”
In truth, it is no mystery why a Quebec grocer would think she had the right to dictate what language her workers spoke, even in their free time. She need only take her cue from the state, which routinely sends the message that French must prevail from the schoolyard to the boardroom.
In 2011, Quebec’s largest school board, the Commission scolaire de Montréal, announced plans to make its schools French-only zones.
The board’s chairwoman, Diane De Courcy, said children overheard speaking another language during recess would be given a polite reminder. “If they are automatically switching to another language, [the monitor] will gently tap them on the shoulder — not on the head — to tell them, ‘Remember, we speak French. It’s good for you,’ ” she said.
Ms. De Courcy now sits in the Parti Québécois cabinet as minister responsible for the French language charter, where she has taken her French-as-medicine message to heart. She is currently preoccupied with extending the reach of language legislation to businesses with as few as 26 employees, calling measures to reinforce French in the workplace “the heart” of a language bill currently before the National Assembly.
The situation at an IGA in the Montreal suburb of Saint-Lambert came to light when CTV reported that a 17-year-old employee — a fluently bilingual anglophone — quit her job after being told she was not allowed to speak English on the job, even in the staff lunchroom.
When she announced she was leaving, the employee, Meaghan Moran, recorded a conversation with her two superiors in which they explained the French-only rule.
“If we permit languages other than French to be spoken, what will happen in the employees’ room?” a woman is heard asking in the recording. “We’ll have a ghetto. We’ll have a small group of Spanish, a small group of English.”
Mr. Poulin, the Quebec-born CEO of the grocery retailer that has stores under the Sobeys, IGA, Foodland and Price Chopper banners, said the situation was limited to a single IGA franchise owner.
“This in no way reflects the position of the company,” he told the National Post. “It’s an isolated incident that is related to one franchisee applying an internal policy that is not reflective of the policy of the company in any way, shape or form.”
Mr. Poulin said the company respects Quebec’s language laws in the workplace, but the franchise owner in Saint-Lambert, Louise Ménard, had gone too far.
“What’s unacceptable is the fact that we tried to constrain the liberty of language of the employees,” he said. “It’s clear that in the relationship with the customers, we’ve got to respect the customers first and the laws that are applicable in every jurisdiction in which we do business.
“On their own time, obviously, it’s for the employees to deal in the language of their choice.”
Ms. Ménard, who operates five IGA franchises in the Montreal area, issued a statement Thursday afternoon denying there are any restrictions on speaking English in her stores.
“The desire is that a common language be used as the everyday workplace language in order to ensure optimal communication between employees within a same store, who often speak several languages,” the statement said.
But the National Post spoke to another former employee at one of Ms. Ménard’s stores who said she quit in 2007 after being reprimanded for speaking English to her high school English teacher at the cash.
Bianca Huhn, who is bilingual, said she was 17 and had been working at the store for about two months after finishing high school when the teacher came to her checkout. “It was chit-chat. ‘How are you doing? Graduation went well. Prom went well.’ And we’re talking in English,” Ms. Huhn said. “Why? Because she’s an English teacher.”
When she finished her shift that evening, she said, her manager took her aside. He had previously complained to her about speaking English with a co-worker. “He goes, ‘You can’t talk English in this store. It’s a French-only store. Here in Quebec we talk French.’ I said F-you, and I walked out,” she said.
Ms. Huhn congratulated Ms. Moran for going public with her story. “Fight this as hard as possible,” she said. “Not being able to speak English is losing your freedom of speech …. Who is this lady [Ms. Ménard] to tell anybody what they can and cannot speak?”
Mr. Poulin said the president of Sobeys’ Quebec division contacted Ms. Ménard Thursday, but he declined to say whether any action would be taken against her. “Our relationships with our franchisees are on a one-to-one basis, and we will deal with Madame Ménard in the appropriate fashion, within the context of our contractual relationship with her,” he said.
In the recording, Ms. Moran made of her final conversation with her bosses, she is told the rules at the store reflect the wishes of Ms. Ménard: “Madame Ménard is a French-Canadian. She signs the paycheque. What she asks is that within these walls, people speak the language of the workplace, which is the language of Quebec. It’s the law.”
Or as Ms. De Courcy would say, with a tap on the shoulder but not the head: “Remember, we speak French. It’s good for you.”

Graeme Hamilton: The PQ is ‘a funny party’ but Lucien Bouchard’s not laughing