As cabinet minister responsible for the Outaouais and Nord-du-Québec regions and MNA for Chapleau, I am very interested in the condition of our roads and overpasses, the quality of our lakes and rivers in particular and our environment in general, the situation in our hospitals and schools, our economy, the other issues the The Gazette invoked in its editorial (["Charest is right: Deal with real issues,"->8095] Aug. 9) and all the ones it overlooked.
I am also the minister responsible for intergovernmental affairs and as such it is my duty to pay particular attention to the state of our federation and the national-unity question. I am mindful of the fact we must strive to ensure Quebec's position within our federation is strengthened, that the practice of federalism is modernized, and that our jurisdictions are respected. In the end, I must do all that I can to ensure all Quebecers can feel good about being Canadian and, I hope, share the same admiration and respect for our country as I do.
The Quebec Liberal Party drafted a substantive policy platform in 2001 on how we should conduct our relations with our federation partners and on the steps we must take to make sure Quebec reclaims its position as a leader within our federation - not to weaken the country but to make it stronger.

We proposed a two-stage approach: (a) a short-term action plan based on new alliances and non-constitutional improvements to Canadian federalism; and (b) in the longer term, constitutional changes to our federal system. We decided to fully explore all administrative improvements and pave the way for more formal and enduring reforms. We adopted in 2001 a resolutely modern, confident and coherent course of action.
And our choices in 2001 have paid off. Premier Jean Charest's government has accomplished many things in its first mandate, making that one of the more prolific four-year periods in Quebec history in intergovernmental relations.
Now, in our second mandate, our government's current priority is to find ways, through administrative means, to limit the federal spending power in areas of provincial jurisdiction. In a recent interview, I clearly identified this as our government's main concern and mentioned that Prime Minister Stephen Harper has, on many occasions, promised to address this issue.
In his now-famous Quebec City campaign speech of Dec. 19, 2005, Harper also proposed a "charter of open federalism," a promise that has passed unnoticed even though he has consistently referred to the concept of open federalism. Our government finds this idea interesting because it would enable all federation partners to reaffirm the federalist values that bond our country together.
Through such an endeavour, we could, among other things, collectively manifest the importance of respecting each other's jurisdiction, give ourselves a code of conduct governing the relations among the provinces and the federal government, and recognize the inherent benefit of diversity and the importance of flexibility.
When asked if I believed such a document could eventually be entrenched in the constitution, I said, "Yes, it could be." Did I call for an immediate full-blown constitutional debate on this matter or on any other? No way.
I am well aware of the fact constitutional reform in Canada is very complicated and must be entered upon only when the time is right and the circumstances favourable.
During the last four years, our government has favoured administrative solutions and we will continue to do so. On the other hand, I know one day we will have to address the constitutional question and, I hope, succeed in giving ourselves a constitution that is a true reflection of who we are as a modern society, a country and a people.

We should be proud of our constitution and always strive to make it better, like all our other institutions for that matter. My responsibility is to prepare for that time and to present and explain all the options available to the government. That is why I cannot shy away from the difficult questions that no one wants to talk about.
Benoît Pelletier is Quebec's intergovernmental affairs minister. 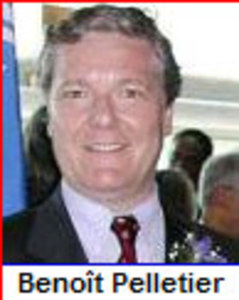