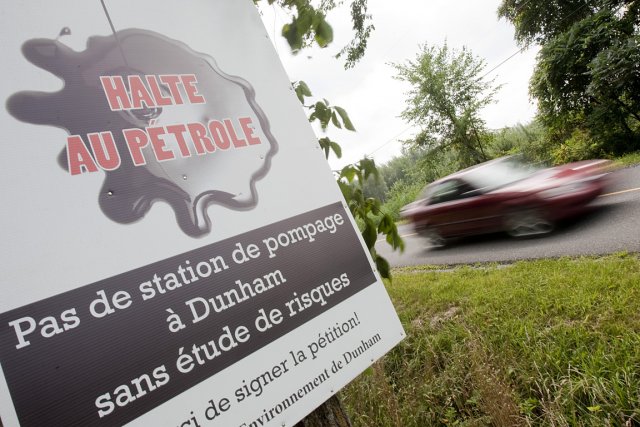 Enbridge is not able to automatically stop the flow of oil in its pipelines if a spill occurs in an area where there’s a power outage, according to a report from the National Energy Board.
The NEB, a federal body overseeing oil companies, performed a safety audit of Enbridge’s operations in the fall of 2011 and found nearly every pumping station along the pipeline network doesn’t conform to safety standards — 117 out of 120.
The report found there was no backup power source to shut down the oil flowing from the Terrebonne station north of Montreal, and that the emergency shutdown system didn’t comply with regulations. That was the case as well for the pumping station in Westover, just north of Hamilton, Ont.
Enbridge’s Line 9B pipeline (from Montreal to Sarnia, Ont.) passes through the Vaudreuil-Soulanges region, and is controlled, in part, by the Terrebonne station. The company has asked the NEB for permission to reverse the flow of the pipeline, and to permit the transport of oil from Alberta’s oilsands.
Reached Monday, company spokesman Graham White explained Enbridge’s control centre in Edmonton can’t see what’s happening, nor can it initiate an automatic shutdown of the pipeline in areas where there is a power failure. However, he said crews on the ground in Terrebonne can monitor the pressure of the pipeline without electricity, and shut down the flow manually, if needed. He added that the company also can stop the flow of oil anywhere on the line, but it can take up to 10 minutes for a shutdown to occur in the best case.
The pipeline reversal will be the subject of public hearings held by the NEB for up to five days at the end of August.
Enbridge officials were in Ste-Justine-de-Newton last week to hold an open house about the project. The crowd that gathered had concerns about Enbridge’s safety record. Several expressed anger that Enbridge officials wouldn’t answer questions, and instead made a presentation about the company’s safety record.
Jamie Nicholls, the area’s MP, said he’s concerned both about the safety violations and the lack of information forthcoming — both from Enbridge and the NEB.
“If questions about basic safety and security can’t be answered by company officials, then it’s problematic for gaining the confidence of people in Vaudreuil-Soulanges,” said Nicholls, who attended the meeting.
He added it’s not clear if the safety issues would have to be fixed as a condition of approving the line reversal.
“If Enbridge gets clearance before completing its corrective action, people are not so comfortable with that,” Nicholls said.
Nicholls also would like to see the collective action plan that Enbridge submitted to the NEB on April 15, and believes that document should be made public.
For her part, Ste-Justine-de-Newton Mayor Patricia Domingos said she’s not against the project in principle, but she is concerned that Enbridge won’t make the necessary safety adjustments to the pipeline that passes under her small town. She said the public meeting on Thursday just added to her concern.
“These people aren’t transparent and they don’t work for us at all,” Domingos said. “We’re going to ask them to put in place safety measures, and we’ll ask that there be consequences if they don’t comply with the safety measures.”
She said she thinks the fact the city of Montreal is also addressing some concerns about the pipeline is a positive step.
“I think the city’s influence is strong enough for something to happen,” she said.
White said Enbridge is addressing the issue, but wouldn’t say when it would be corrected.
“We are doing everything we can to comply,” White said.