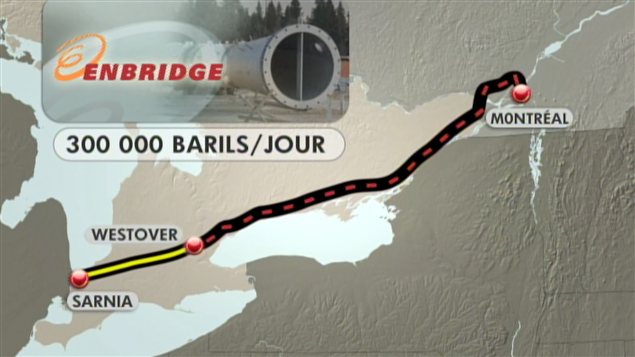 Unsatisfied with a pending federal review, Quebec will soon launch its own consultations on a plan to reverse the flow in a pipeline between Ontario and Montreal, Environment Minister Yves-François Blanchet said Sunday.
“Quebecers have traditionally been much more sensitive to environmental issues, so they have reservations, questions and concerns. They want to be heard,” Blanchet said Sunday on the Radio-Canada television program Les Coulisses du pouvoir. “People will be pleased by what we are putting in place to ensure that they are heard.”
Blanchet first promised in December that Quebec would do its own review of the project proposed by Calgary-based Enbridge Inc.
It wants to reverse the flow in its existing Line 9B pipeline, a 639-kilometre steel pipeline running between Montreal East and Westover, Ont. The pipeline now carries oil west to Ontario refineries. The company wants to ship oil from Western Canada and the U.S. to Montreal, increase the capacity of the pipeline, and be allowed to carry bitumen — heavy crude oil — from oilsands operations.
Blanchet said he will not participate in the NEB review because it is too restricted, and not an effective forum for Quebecers. Quebec, however, has applied to the NEB for permission to participate in the hearings.
Quebec’s consultations will look at the issue of pipelines, and specifically at the project to reverse the flow of Line 9B, Blanchet said Sunday.
“Environmental groups have rightly raised questions. The kind of oil, what impact that oil will have on the pipeline, and reversing the flow, which will exert additional pressure on the pipeline — those are pertinent questions. They have to be examined as seriously as possible, and that’s why we are doing consultations,” he said. “Despite my very personal reservations, I’m going to wait for those consultations before making a decision because if not, what is the good of doing consultations?”
Environmental groups, citizens and municipalities, including the city of Montreal, have asked Blanchet for the review, citing concerns about potential spills from the pipeline and impact on drinking-water supplies.
Blanchet refused to say whether he was for or against refining oilsands oil in Quebec. But he said Ottawa must do more to reduce greenhouse gas emissions.
“On a planetary scale, at the international level, pressure is being brought on all Western states to reduce their greenhouse gas emissions,” he said. “While Quebec has lowered its emissions compared to 1990, Alberta’s have gone up 46 per cent. I would say to the federal government you have to make remarkable efforts to reduce your greenhouse-gas emissions, because if you don’t, your behaviour is not very responsible.”
Last week Enbridge held open houses in four Montreal-area towns to explain the company’s pipeline maintenance program and spill-response plans.
Read more: http://www.montrealgazette.com/business/Quebec+launch+pipeline+consultations/8306870/story.html#ixzz2RzB7l57a