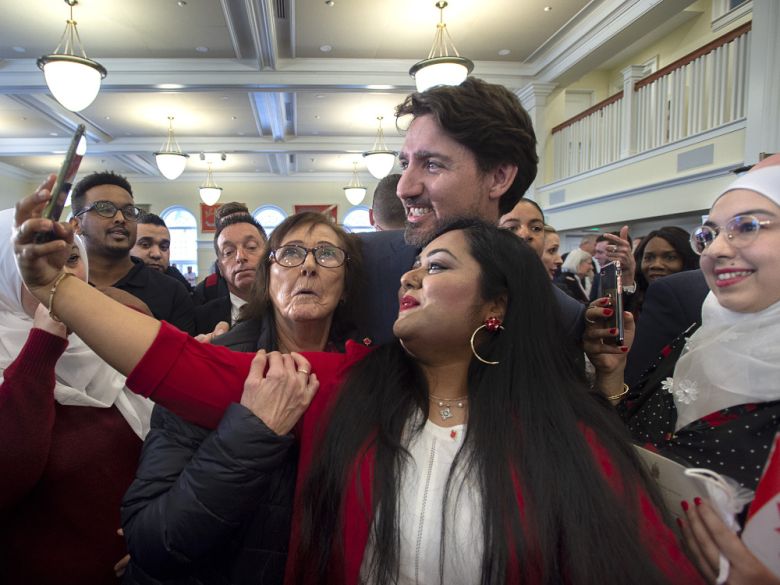 WOLFVILLE, N.S. — Prime Minister Justin Trudeau stunned a group of new Canadians on Tuesday when he showed up unannounced at a citizenship ceremony at Acadia University in Wolfville, N.S.

The 45 newly minted citizens from 13 countries had just read aloud the oath of citizenship when they were told to stand by for a video message from the prime minister, which is part of the usual ceremony. However, they were then told there was a technical problem.

At that moment, Trudeau appeared from behind a doorway and the crowd, which also included about 100 friends and family, roared its approval.

Neelgiri Chatterjee, who is originally from Bangladesh, was beaming after he received his certificate of citizenship from Trudeau.

“That was the biggest dramatic entry I have every seen,” said Chatterjee, who moved to Canada in 2011 to study commerce at Saint Mary’s University in Halifax. “I will remember this day for the rest of my life.”

Chatterjee now works in the banking sector as a senior financial adviser at Scotiabank.

“I was going to go back, but I fell in love with Canada and Nova Scotia…. I’d like to grow my career in Canada. It has one of the strongest financial industries in the world.”

Trudeau told the new citizens he had recently received a letter from a man in Ontario who thought the prime minister would enjoy reading an essay his 13-year-old granddaughter had written about what it means to be a Canadian.

“The young woman said that, to her, being Canadian means smiling at someone who looks down. It means that we always hold the door open for the person behind us. We say ‘Sorry,’ even when someone else did something wrong,” Trudeau said.

“To her, what make us Canadian is our willingness to help our neighbours…. It’s about leading with kindness and understanding. It’s about being ambitious for your family and your community. Being Canadian is a concept far too rich to be confined by geography or defined by faith or ethnicity.”

The prime minister said the new citizens were marking a new chapter in their lives.

“Celebrate the journey that led you here,” he said. “From where I’m standing, the future looks very bright, and it’s because people like you have chosen Canada. On behalf of all Canadians, welcome home.”

Earlier in the day, Trudeau was in nearby Halifax, where he announced Ottawa would invest $492 million in a youth employment strategy aimed at helping young people who face barriers to employment.

The money will be spent on local and national projects that will build workforce skills for single parents, homeless youth, visible minorities and people living with disabilities.