Analysis: Couillard sets tone for what lies ahead 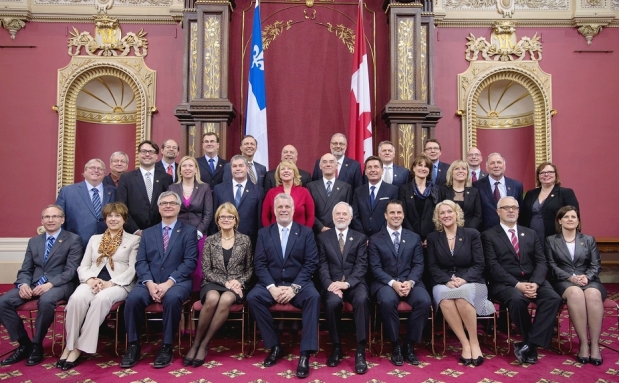 QUEBEC — To most Quebec voters, as one analyst recently noted, Philippe Couillard remains an enigmatic figure.
Comfortable in the world of big ideas and concepts, he so far does not fit the mould of a vote-hungry, winner-take-all politician.
But in announcing his first cabinet, Premier Couillard — as he can now be called — has shown his cards to Quebecers as never before, setting in motion the no-frills, no-nonsense administration that he believes Quebecers want and he feels comfortable with.
What it lacks in flair — Couillard is not built that way — will be made up with concrete actions for the taxpayer, he hopes, spread over the next four years.
The motto will be simple: Do what the Liberals promised to do in the election — starting with the economy and jobs at the same time as taking care of health, education and the vulnerable.
All that was abundantly clear in a speech he delivered Wednesday after the swearing in of the 26-member cabinet.
“You will remember at all times that you really only have one customer to report to and they are very real,” Couillard told the ministers seated before him in the red room of the National Assembly.
“All the citizens of Quebec.”
Then came the bad news. The days ahead will not be a picnic, with Couillard running down a list of cold, hard facts — known to every Quebec taxpayer — that previous governments of all stripes have tried to sweep under the rug.
Most indebted province in Canada, highest spending, highest taxes, stalled growth, stagnant government revenues, unemployed youth.
Governments, he argued, have strayed from essential missions.
“We need to act with strength, courage and determination to correct a situation which represents a threat to the quality of life of present and future generations,” Couillard said.
“The hour for half or cosmetic measures is past. The time to make difficult decisions has arrived.”
Which places the ball firmly in the lap of his new ministers — particularly the economic trio of Carlos Leitao in finance, Jacques Daoust in economic development and Martin Coiteux, at the Treasury Board.
While the first two will have to stimulate growth, Coiteux — as the province’s top bean-counter — will be expected to find ways to trim an estimated $2 billion in spending over the next two years.
“The bar is very high for the duo of Leitao and Daoust,” Coalition Avenir Québec Leader François Legault remarked later.
But Couillard went further, using the cabinet exercise to address the other elephant in the room, the one that propelled the Parti Québécois into power 19 months ago: honesty.
“Quebecers have given us their confidence at a time where all the political world, including our party, are under the microscope,” Couillard said.
“Integrity will be our cardinal virtue. We will have nothing to hide. Transparency is the best prevention.”
And some of his nominations tackle that issue head on.
He’s named a former Sûreté du Québec police officer, Robert Poëti, minister of transport, to keep an eye on a ministry named many times by the Charbonneau Commission into corruption and collusion.
Poëti will have the job of asking the tough questions previous ministers seemed unwilling or unable to ask about the spending of billions in infrastructure dollars.

'We are the party of the economy'