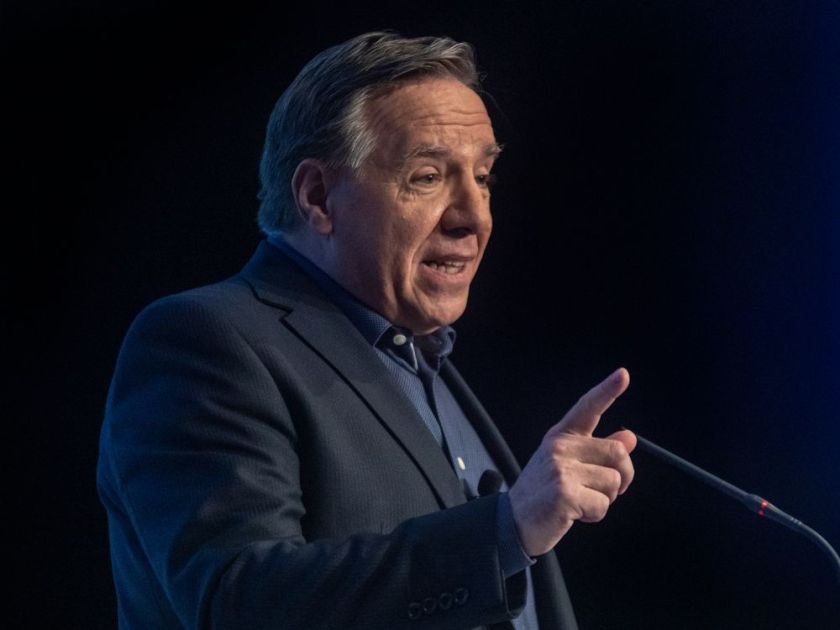 With the clock ticking toward the first-year anniversary of the election of the Coalition Avenir Québec government, Premier François Legault has vowed to get moving and delivering on some of his other more expensive election promises.

As the National Assembly prepares to resume sitting for the fall session Tuesday, the government and opposition parties — two of them without full-time leaders — all have packed political agendas.

And nearly everyone is peddling change with Premier François Legault and his cabinet ministers leading the pack.

“After a first year where we made many changes (in Quebec), prepare yourselves,” a pumped Legault told the 74 member of his caucus at their meeting last week in Rivière-du-Loup.

“We are going to keep on making changes. We won’t be sitting on our laurels in the coming months.”

He also issued a warning to his troops: Don’t get too cocky.

“Things are going well now, but we have to stay humble,” Legault said. “No arrogance.”

It is an understatement to say Legault and his Coalition Avenir Québec government are governing from a position of strength, with the kind of unfettered mandate many parties can only dream of.

A Forum Research poll published last week in the Montreal Gazette placed Legault firmly in the driver’s seat with the support of four in 10 Quebecers as the CAQ closes in on the anniversary of its first year in office.

“People stop me on the street to say they are proud we stuck to our promises, including on Bill 21 (Quebec’s secularism legislation),” Legault said in that same pep talk speech to the caucus

“And that they feel close to us. They have the feeling we don’t look down on them and that we are humble.”

CAQ insiders say their internal polling indicates Legault’s support level — with the exception of the minority vote — is even higher than Forum. Forum pegged support for the CAQ 43 per cent.

Those same officials believe Legault’s new brand of nationalism has struck a chord with Quebecers who have moved beyond the federalism-sovereignty debate. That is one reason why the party find itself in a sweet spot with voters.

On the other hand, the CAQ recognizes its opposition is weak and in modern politics the people’s mood can change in the blink of an eye.

Yet the relief in the caucus the government passed its controversial secularism legislation early in its four-year mandate is clear.

With Bill 21 and Bill 9 reforming the immigration system out of the way, the CAQ now is promising to tackle other touchy issues this fall: language, replacing school boards with service centres and reforming the electoral system.

On that latter issue, Sonia LeBel, the minister responsible for electoral reform, has promised to introduce a bill creating a mixed proportional voting system by Oct. 1.

While LeBel has said the time needed to put in place such a system will mean Quebecers will vote in 2022 under the old rules, Legault himself is more vague.

What is likely is Quebecers will wind up voting in a referendum on the system at the same time as they vote in the 2022 general election.

The second big piece of legislation will be Education Minister Jean-François Roberge’s bill replacing Quebec’s 72 school board with 72 service centres.

Hotly contested by both the English and French boards, the bill will also do away with elections. After much behind-the-scenes debate, the CAQ has decided to allow the elections to continue in the English system, a decision entrenched last week at the CAQ caucus in Rivière-du-Loup.

Hovering in the background will be the fate of the embattled English Montreal School Board, which could learn as early as this week whether the government is putting it under trusteeship following the release of a devastating inspection report that concluded the board is dysfunctional.

The government has also taken a step toward a revision or modernization of Quebec’s language laws by handing the issue over to Simon Jolin-Barrette, who now carries the new title of minister of immigration, francization and integration.

He inherits a nearly completed language action plan concocted by his predecessor, Nathalie Roy, which includes a reboot of the various agencies handling language issues and the creation of a commissioner of the French language, a move endorsed by the CAQ youth at their summer meeting.

There’s no lack of other issues to keep MNAs hopping, either. Some time in October, they will be called up to vote for a new director of the province’s anti-corruption unit, UPAC.

Under the new system, adopted by the legislature last session, it takes a two-thirds vote of the house to put the person in place.

And in November, Finance Minister Eric Girard will present an economic update, which, if he does the same thing as last year, includes some goodies for voters.

That’s because, as Legault said Friday wrapping up the party’s caucus meeting, the CAQ intends to use the oodles of spare cash in the treasury to fulfill its election promises: namely a further reduction in school taxes and another increase in the family allowance.

Quebec’s robust economy means the government’s surplus is now in the range of $4.4 billion — money Quebec’s 500,000 public- sector workers would like to lay claim to.

Legault read them the riot act Friday at the caucus.

The three opposition parties also have no plans to give the CAQ a free ride.

Emerging from a Québec solidaire caucus meeting here Sunday, party co-spokespeople Manon Massé and Gabriel Nadeau-Dubois said they will be pushing the CAQ to start taking the question of climate change much more seriously in the new session.

That would start with Legault and other CAQ MNAs marching along with ecologist Greta Thunberg at the Sept. 27 worldwide march against climate change.

“It will be our priority as long as it is not François Legault’s priority,” said Nadeau-Dubois, who expressed skepticism at Legault’s change agenda.

He noted Legault’s recent statement to unions about their wages resembles the same austerity line of the previous Liberal government.

“It’s the precise opposite of change,” Nadeau-Dubois said. “When it comes to the people on the ground giving services to the population, there’s never any money for them.”

But QS also wants to focus on the issue of Quebec independence and has announced plans to focus its November policy convention on the issue.

Still reeling after the last election, the Liberals and PQ face their own hurdles, starting with the fact neither has a permanent leader and candidates are not beating down the door to get the job.

With Dominique Anglade the sole candidate thus far, the Liberals will kick off a leadership race in November when the party holds a general council meeting in Sherbrooke.

The Liberals face a more short-term problem and that is how to hold on their only riding east of Montreal, Jean-Talon, left vacant with the resignation of Sébastien Proulx.

The tattered PQ is doing its own soul-searching under the interim leadership of Pascal Bérubé. In November, the party will re-found itself at a policy convention in Trois-Rivières. A new “PQ 2.0” is supposed to emerge from the meeting.