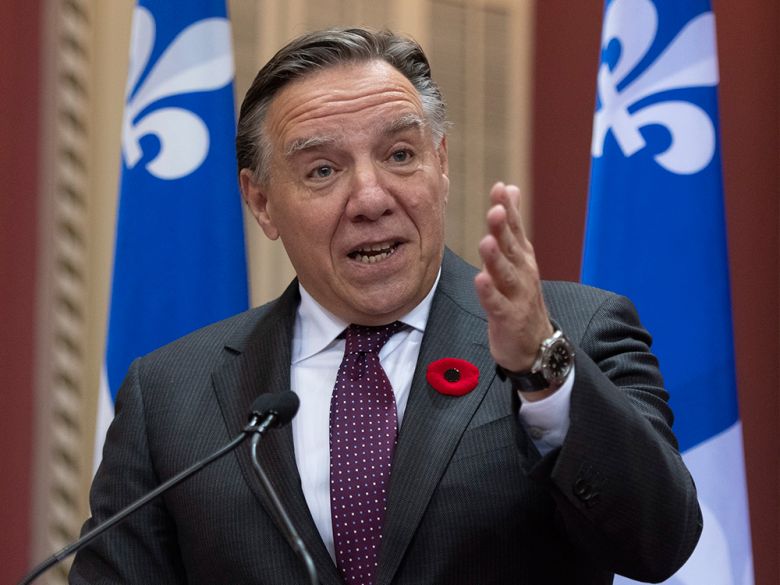 Quebec’s sovereigntist impulse is allegedly in remission, but don’t get too excited out there. In its place come new ways of provoking that part of Canada that isn’t east of Ontario and west of the Maritimes. Perhaps that’s the true genius of what makes it a “distinct” society: the ability to effortlessly exasperate the rest of the country.

Premier François Legault managed it with barely a hint of effort when he suggested that, henceforth, only those citizens with a verifiable history in the province should expect the courtesy of being addressed in English.

“If your parents went to the English school, you have rights in Quebec and we will respect those rights,” he said. “If you’re a new immigrant, we have to talk with them in French, that’s the difference.”

But of course the new non-sovereigntist “but we’re still special” element of Quebec politics doesn’t see things that way. We got a healthy dose of that during the recent federal campaign, when Bloc Québécois leader Yves-François Blanchet made great gains by suggesting he was willing to tolerate other parts of Canada, as long as they didn’t presume to suppose Quebec had any duties or responsibilities to the country beyond those that explicitly benefited itself.

Blanchet was said to be channelling Legault, who has achieved admirable popularity ratings within the province by pushing through Bill 21, the law that bans teachers, police, judges and others from wearing clothing reflecting their religion. The fact the rest of the country largely sees the law as a direct attack on religious freedom and a thinly-veiled demonstration of ethnic intolerance only strengthens its allure within the province. How better to demonstrate your “unique” status than to have the whole country tell you you’re wrong, and not give a hoot? Legault adroitly followed up by letting slip that he would be introducing a “values test” on potential immigrants, to ensure they appreciated just what is required of them as Quebecers. The aim of the test is to “integrate in French into Quebec society and adhere to Quebec values.” When quizzed about the test, the example Legault immediately offered was a need to ensure newcomers understood all about Bill 21. As in, bonjour, welcome to Quebec, you know you’re going to have to lose the turban if you want to teach Grade 3, right?

How better to demonstrate your 'unique' status than to have the whole country tell you you’re wrong, and not give a hoot?

Now, fresh off that triumph, Legault has suggested that only “historic Anglophones” should expect to receive government services in English. New Quebecers — i.e. the ones who managed to pass the values test — should anticipate being dealt with solely in French. And, in case you were wondering what constitutes a “historic Anglophone,” Legault’s Coalition Avenir Québec had its definition already at hand. Never mind that Canadians continue to spend heavily on bilingualism policies across the country for the sake of the minority that use them, and that great uproars erupt at any perceived backtracking; in Quebec they see no reason to offer a similar degree of service.

Language laws have always been an easy way for Quebecers to drive others crazy. Recently Language Minister Simon Jolin-Barrette suggested a ban on the popular greeting “bonjour-hi,” because, you know … there’s a hint of a public willingness to coexist in there, and we surely can’t have that. He eventually backed down, but you know he’ll be back. Language perversity never dies in Quebec, it just fulminates in a corner. The Parti Québécois government of Pauline Marois attracted international ridicule when Quebec’s language police sought to drive the word “pasta” from Italian menus, but the lesson was short-lived. When the issue of “historic Anglophones” arose, former finance minister Carlos Leitão expressed perplexity: “Is there some sort of secret password, secret handshake?”

Leaders of the main federal parties indicated during the election campaign that they remain loath to involve themselves in Quebec’s never-ending identity crises, but ignoring a matter doesn’t make it go away. While busy denouncing Bill 21, Conservative, New Democrat and Liberal leaders all shied away from a direct challenge. The closest anyone came to girding for battle was Prime Minister Justin Trudeau, who waved off an immediate challenge as “counterproductive” but allowed that, if the courts didn’t make it go away, “a federal government might have to intervene on this.”

Lots of things “might” happen, but there is little sign that either Legault or Blanchet intend to ease off on their drive to establish a set of Quebec “values” alien to Canada. In accepting his government’s reduction to minority status, Trudeau acknowledged there are strains to national unity that need to be addressed. They are not confined to Alberta, and if Trudeau intends to show he has the will, and leadership skills, to navigate Canada through this latest test of its character he should get busy in Quebec to make clear that being “distinct” doesn’t necessarily require being objectionable.