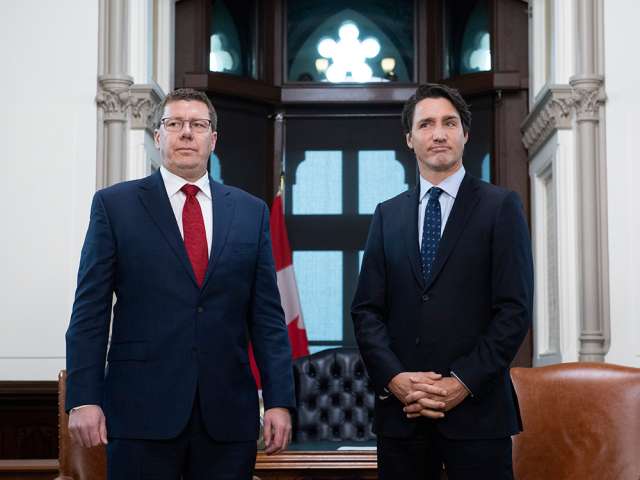 Chrystia Freeland deserves a lot of credit for saving Canada from Donald Trump. Can she save the Liberals from Doug Ford, Jason Kenney and François Legault?

That may sound facetious, but it is, in essence, the task she’s been given in her position as minister of intergovernmental affairs. If October’s election proved anything, it’s that Canada is a country in which the bonds of unity can never be taken for granted. Prime Minister Justin Trudeau let them fray badly in his first mandate. In the opinion of many, he contributed substantially to the fraying. It’s never clear how deeply this prime minister absorbs any of the lessons he’s been offered since first taking office, but the voting results, and the growing cacophony of provincial acrimony, have evidently made him aware at some level that something serious needs to be done to bring calm to the provinces. So he’s turned to Freeland.

Perhaps that’s a sign that he understands Freeland has skills he lacks. It is no small achievement to have gone head-to-head with the White House over Canada’s most vital trade relationship and emerge with a deal that protects Canada’s interests while allowing the vainest and most self-centred of presidents to claim victory. The new NAFTA is a true rarity of the Trump administration, a complex accord that satisfies all three signatories, and has the backing both of the Oval Office and a divided Congress that has been at war with itself since the day Trump took office. Even as one wing of Congress is trying to oust Trump on impeachment charges, legislators on all sides are working hard to find a way to approve the pact so they can prove they’re capable of something besides partisan bloodshed.

Outside the U.S., Freeland helped nail down a trade deal with the European Union that British Prime Minister Boris Johnson cites as his goal if and when Brexit is achieved. She’s also handled the task of dealing with China’s leadership at a time when it’s abandoned diplomacy for a nationalistic megaphone.

Given her record, it might seem that finding harmony with a handful of provincial premiers would be an easier task. Obviously it won’t have the international implications, but that’s no reason to underestimate the ability of Canada’s political class to pick fights with one another. Kenney might not be in office now if Rachel Notley hadn’t underestimated the pig-headedness of her fellow premiers, not to mention members of her own party. And Kenney has plainly decided that doing battle with Ottawa is to be a core part of his government’s identity. The combative address he delivered a week ago in Red Deer was nothing if not fair warning to the new minority government that he sees it as a major impediment to the pursuit of Alberta’s best interests, and he’s far from alone in that view: Saskatchewan Premier Scott Moe left his post-election confab with Trudeau looking downcast and predicting “more of the same” tone deafness from an Eastern-oriented administration fixated on its same old obsessions.

Freeland will also have to find a way to make nice with Ontario’s Doug Ford, who spent much of the federal election in hiding but was nonetheless treated to a startlingly aggressive series of insults and attacks. Ford’s first year in office was filled with stumbles, and it may be that Trudeau’s people assume the remainder of his term will prove as self-destructive, but there are signs that Ford isn’t planning to go along with that scenario: his walking time-bomb of a chief of staff has been dumped, rhetoric has been toned down, contentious policies have been softened or re-thought and Ford made a point of congratulating Trudeau on his re-election while stressing the strains on national unity, which he likely doesn’t believe are the fault of the provinces. He’s offered to host a gathering of the premiers to discuss the unity problem, an offer that won the praise of Toronto Mayor John Tory, who hasn’t always been a fan of the Ford family.

There is one near-certain means to put smiles on faces at Queen’s Park, and that’s to trundle Ottawa’s cash-dispensing machine into the province and set it on high. The Trudeauites have never demonstrated a reluctance to spend money in bulk, and would have been lucky to place a distant second in October if not for the voters in and around the Toronto megalopolis. The region desperately needs money for a vast expansion of public transit, and transit fits nicely into the Liberal climate change agenda, so if Freeland finds herself spending a lot of time championing the delivery of large cheques to grinning Tories, it wouldn’t be a total surprise. It can’t hurt that she’s also now the deputy prime minister, and represents a downtown Toronto riding, quite near that of Finance Minister Bill Morneau. So while the Liberals may not fathom Western alienation, they should certainly grasp what makes Toronto happy.

That leaves Quebec, where Legault has spent much of the past year inviting Ottawa to keep its nose out of local affairs. Should the courts fail to derail Bill 21, the contentious provincial secularism law, Trudeau could find himself forced to keep his heavily-hinted-at plan to intervene, an act that would impact unity like an improvised explosive device. Add to that the fact that some concessions likely to make Jason Kenney happy — like a radical change in equalization — are just as likely to inspire outbursts of political outrage from Quebec, and the traditional demands for redress. It won’t help to have newly-empowered Bloc Québécois leader Yves-François Blanchet tossing out separatist complaints about any federal action that isn’t wholly and completely designed for the sole benefit of Quebec, as he has shown great skill in doing.

Freeland’s political skills are such that she managed to emerge from the SNC-Lavalin affair unscorched, despite her boss’s ugly display towards two serious-minded and intelligent women. She’ll need that and more if she hopes to keep four grumpy premiers happy, at which point she’ll probably face a chorus of complaints from the other six that they weren’t getting equal attention. It’s the nature of Canadian federalism, a perpetual effort to test the strength of the bonds that hold us together.