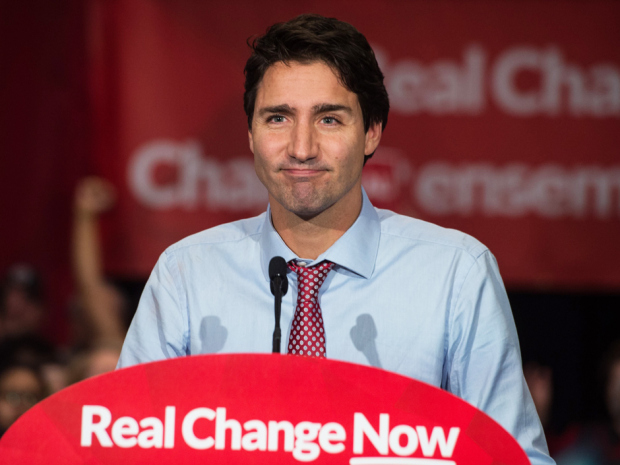 35,000 FEET ABOVE WINNIPEG — Writing this on the flight back from Calgary to Ottawa, after completing a coast-to-coast journey that felt like Frodo’s trip to Mordor, I gazed out across a country that is largely content with the outcome of the 42nd general election.

Even Conservatives will whisper privately that it was probably for the best — they remain a contender and all the messy business of trying to run another minority government, as two-thirds of the country reached for their torches and pitchforks, has been avoided.

For the rest, excepting perhaps a few New Democrats, there is a euphoria that feels on a par with VE Day, the moon landing or a Canadian Olympic hockey gold medal.

Such lofty expectations of the new Trudeau government will come back down to earth with a crash, needless to say.

I’ve heard from public servants, fed up of being muzzled and ignored, who were enchanted by Trudeau’s promise in his inaugural press conference that his government will “listen to, work with and respect the public service.”

There is no doubt that the chill of the last few years will begin to thaw, but the Trudeauvians have a $6.5-billion hole in their platform that they say will be filled by making unidentified cuts in public spending. It will be grimly ironic if some of the new regime’s bureaucratic cheerleaders find themselves surplus to requirements.

The comprehensive nature of the Liberal platform means, inevitably, some policies will be shelved in the short term. There is only so much money and legislative time to introduce such a broad raft of reforms.

But then there are the promises that Trudeau may decide are not in his interests to keep. Chief among those could be the commitment that the 2015 election is the last to be conducted under the first-past-the-post system. “We will convene an all-party parliamentary committee to review a wide variety of reforms such as ranked ballots, proportional representation, mandatory voting and online voting,” the Liberal policy document says. Legislation for electoral reform is to follow within 18 months of taking office.

However, this pledge was made before the Liberals won a thumping majority. In fact, under PR in its broadest form, the Grits would have won just 135 seats and had to manage a minority government, horse-trading with a Conservative party with 108 seats, the NDP with 68, the Bloc with 17 and the Greens with 10. Will the nearly additional 50 MPs elected under the current system be quite so enthusiastic to fundamentally change the central plank of our democracy? Perhaps a less dramatic reform than originally envisaged may emerge, after being talked to death in committee.

There are other areas of proposed reform that may seem less urgent or take on a different hue, now the Liberals rule the Langevin Block.

Such lofty expectations of the new Trudeau government will come back down to earth with a crash, needless to say

The Grits’ plan for the Senate is to create a blue-chip appointments panel to recommend non-partisan Senate nominees. Trudeau said he hoped his removal of his Liberal senators from caucus would be seen as a “downpayment on the values I will bring to the office of prime minister.”

But, if his legislative agenda is filibustered by the Tory majority in the Red Chamber, will he be able to resist appointing partisans to the 22 vacancies that currently exist?

On partisan advertising, the Liberals have vowed to end the days when taxpayer-funded ads endorsing Conservative policies appeared on heavy rotation during playoff hockey.

The plan is to appoint an advertising commissioner to review ads to ensure they are non-partisan and relevant. Dalton McGuinty’s Liberal government in Ontario introduced a similar measure, but his successor later complained the rules were too tight. There have been moves more recently to loosen those restrictions.

On Access to Information legislation, the Liberals have said they will make information more accessible, eliminating fees and including information for Trudeau and his ministers. Trudeau may have a sober second thought about that one, once his new best friends in the press gallery go through the digital equivalent of his garbage.

The point is not that most of these things are not desirable — most are (although I have reservations about PR that would take another column to document).

But governments should be judged by their actions, not their intentions. Justin Trudeau is nothing, if not a man of good intentions.

Yet, as was once explained to me by a venerable and veteran Liberal, Tom Axworthy, “liberalism’s dirty secret is that government doesn’t seem to work well much of the time.”

Then there is the corrosive influence of the first directive of all politicians, in all democracies, at all times: what will this decision mean to my prospects of re-election?

As Bill Clinton advisor George Stephanopoulos once said so revealingly: “The President has kept all the promises he intended to keep.”

History suggests that finite resources and realpolitik will limit the transformative change espoused by the new kids in town. We will be watching.