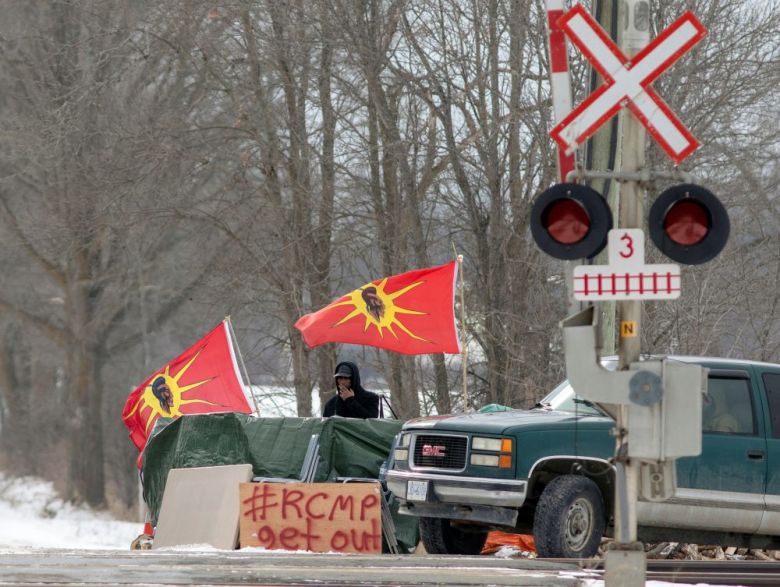 The uber-woke protesters who blockaded a CN rail line last weekend would be horrified at being accused of cultural colonialism. But they are as guilty of telling Indigenous Canadians how to live their lives as any Father of Confederation.

The reason 50 of them snuck into the MacMillan Yard north of Toronto and set up camp was to protest the “oppression” of the Wet’suwet’en 4,000 kilometres away in British Columbia — an Indigenous nation whose traditional land they say was “invaded” by the RCMP in an act of colonialist aggression.

She referred to herself as a settler on Canadian land, but one with Indigenous roots in Venezuela.

She said the land she calls “Turtle Island” has been stolen from its native inhabitants.

Canadians should be prepared to give up a “cozy lifestyle” that “upholds white supremacy” and is built on the exploitation of the Indigenous population, she said, though she was less clear what she would forgo. “I don’t have a home, a car or a family,” she said.

Montilla and her comrades are effectively saying they know what’s best for the people who live in the communities along the route.

The juxtaposition of the views of the eco-activists with those who actually live there couldn’t be more stark.

Troy Young, a member of one Wet’suwet’en community, is the director of an Indigenous-owned company that stands to benefit from contracts to clear trees and build roads along Coastal GasLink’s proposed pipeline’s route.

He said the history of the Wet’suwet’en is of outsiders telling them how to do things. “Why would we accept it? If the environmentalists are successful, it will be one of the biggest cultural appropriations in British Columbia’s history,” he said.

Crystal Smith, the chief counsellor of the Haisla Nation, which has also signed an agreement to allow the pipeline to pass through its traditional land, recently offered an impassioned defence of what she called “an historic achievement.”

“First Nations have been left out of resource development for too long,” she said. It would have been easy to say no (as the Haisla did over the Northern Gateway oil pipeline). “But we are involved, we have been consulted and we will ensure there are benefits for all First Nations.”

Smith said the divisions between Wet’suwet’en hereditary and elected chiefs should be resolved internally. Activists like Montilla parrot the line that the elected chiefs are the product of a colonial history and that the hereditary patriarchy is the only legitimate source of power.

(Five of the six Wet’suwet’en bands support the pipeline, while five of the 13 hereditary chiefs oppose it. Two of those five opponents have titles that are disputed after hereditary chiefs Darlene Glaim and Gloria George, who held the titles of Woos and Smogelgem, say they had their status “stripped” and given to two men, Frank Alec and Warner Naziel, because of their support for the pipeline.)

But the internal machinations of this particular First Nation are a distraction.

The bigger picture is that 20 bands along the route see this project as a way out of the cycle of underdevelopment they have been caught in.

As Smith put it: “This is a once-in-a-lifetime opportunity. I’m tired of managing poverty. I’m tired of First Nations’ communities dealing with issues such as suicide, low unemployment or educational opportunities. If this opportunity is lost, it doesn’t come back.”

Paul Manly, the Green MP for Nanaimo-Ladysmith, has spoken in support of the Wet’suwet’en hereditary chiefs. He said elected chiefs have not “consented” but merely “conceded,” that they might as well rake in some money from a project seen as inevitable.

That is not the interpretation I have taken from speaking to, and hearing from, local businesspeople and politicians. Smith talked about the pipeline proponents and the province approaching the Haisla from a “position of respect.”

What right do the cultural colonialists who blockaded the MacMillan Yard have to say they know better than the democratically elected leaders of these 20 First Nations?

As Alberta Premier Jason Kenney noted, these people are not Wet’suwet’en supporters, they are Wet’suwet’en opponents.

There are some very broad questions about how to bring Indigenous Canadians into Confederation as partners. The answers probably involve self-government and Indigenous rights recognition.

But if those empowered communities are to be sustainable they need jobs.

They manifestly do not need the unwise counsel of millennial eco-activists whose definition of hardship is living in their parents’ basement.

Listen to 10/3 on Apple Podcasts