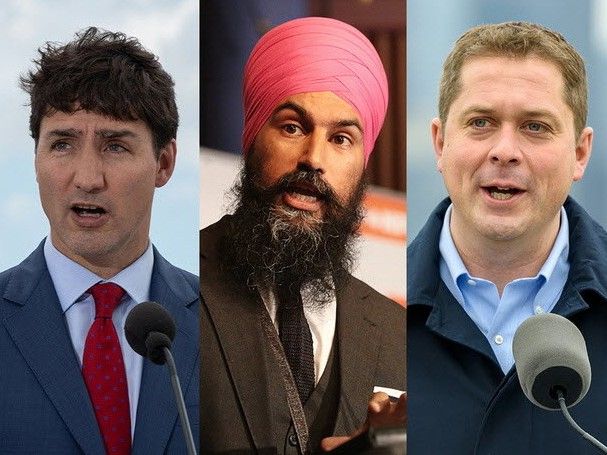 The Liberals feel the disturbance in the Force that saw the NDP‎ and the Bloc Québécois surge after the leaders’ debate has passed, and they’re convinced they will now progress to victory as relentlessly as Justin Trudeau cruised up Highway 401 on Monday.

The Liberal tour started the day in Windsor, Ont., where the party has high hopes of taking seats, particularly Windsor West where the candidate is former Ontario provincial cabinet minister Sandra Pupatello. There were four other stops in opposition-held ridings during the day — Chatham-Kent-Leamington, London Fanshawe, Hamilton Centre and Kitchener Conestoga. That’s not behaviour typical of a party playing defence.

Yet the admission by NDP Leader Jagmeet Singh over the weekend that he would “do whatever it takes” to keep the Conservatives from power, including supporting a Liberal minority government, meant Trudeau was under pressure to clarify his own position on what still appears the most likely outcome of this election.

Most questions about a possible coalition were dismissed out of hand. The focus is on electing a progressive government and stopping Conservative cuts, he said.

So focused on cuts was he that he mentioned the word 45 times in a very short speech (he also referred to Doug Ford nine times and the American president 11 times. Trudeau said he “stood up to Donald Trump and other challenging leaders”).

Would he categorically deny that he would block the expansion of TMX in exchange for Singh’s support?

The emphasis on cuts is rather rich, coming from the leader of a party running on a platform that books $10 billion over four years in unidentified savings from a “tax expenditure and government spending review.” By comparison, the Conservatives are only claiming $9.4 billion in “operating expenditure reductions” in the same time period, in addition to their pledged reductions to foreign aid, corporate welfare and investing infrastructure spending over 15 years instead of 12.

Still, the prevailing moral principle in all the campaign war rooms is truthiness, so who cares? In the words of Sir Humphrey Appelby, the prime minister has no business being a politician if he can’t ignore facts.

But while he was able to gloss over inconvenient details and the coalition question, Trudeau considered it prudent to answer one query about the Trans Mountain pipeline. Would he categorically deny that he would block the expansion of TMX in exchange for Singh’s support?

“We made a decision to move forward on the Trans Mountain pipeline expansion and invest all the profits into green energy transition and fighting climate change because it is in the national interest,” he said. “That is what we are going to continue to do.”

That would appear to be a denial and will complicate any discussion on a coalition, informal or otherwise, with the NDP. Just the day before, Singh said that, while he did not want to negotiate a future government in public, he would talk about his priorities, “and absolutely, my priority is to fight that pipeline.”

In their current state of revived elan, the Liberals should have one eye on the mess they have helped create in Western Canada. Trudeau was elected on a promise to forge consensus and bridge partisan divides. But this is a government that has dismissed the critics of its prevailing vision as uninformed and unworthy. Social media has exacerbated those divides on both the left and the right, breeding “defiant communities of lunatics, who once huddled in shared isolation with their unsettling obsessions,” in the words of American writer Scott Turow. But large numbers of otherwise sane people also believe the security scare on Saturday night was a desperate campaign stunt cooked up by the Liberals — such is the distrust in everything politicians, especially this one, say or do.

A re-elected Liberal government risks the prospect of a full-blown national unity crisis coming out of the West.

Trudeau said he recognized that people in Western Canada have had a “very difficult few years” but defended his government’s record, pointing to changes in Employment Insurance and “shovels in the ground” on TMX.

But even a fully operational Trans Mountain expansion is unlikely to convince many Westerners that Trudeau is not inimical to their interests. What else do the Liberals propose to do to convince those who work in the resource industries of Alberta, Saskatchewan and British Columbia that they are not “forgotten people, in forgotten places,” to quote former Stephen Harper adviser Sean Speer?

Perhaps he will do nothing. If everything goes to plan in Windsor, Chatham, London, Hamilton and Kitchener, it could be that Trudeau won’t care unduly what happens west of the Ontario border.