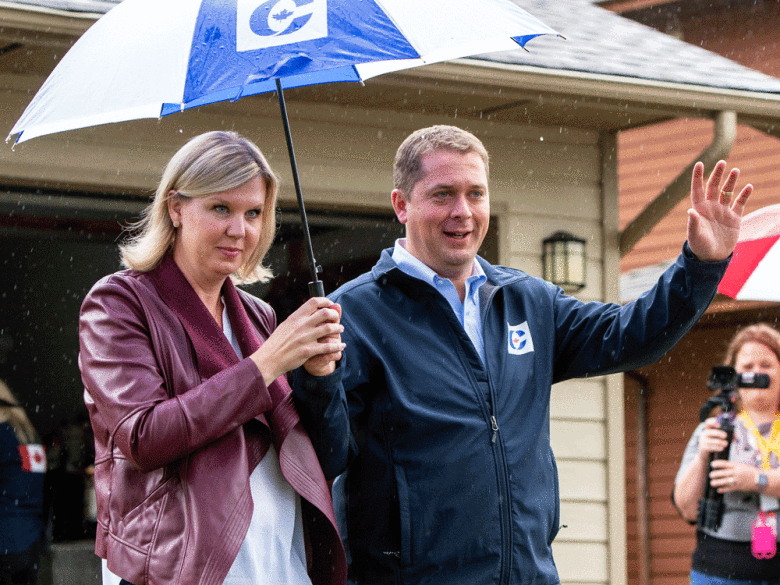 PARKSVILLE, B.C. — Feet were tapping and snowy heads nodding, as Cracklin’ Rosie blasted over the PA system in a packed auditorium. This was verdant pasture for any Conservative leader — the jewel of Vancouver Island, where eagles nest and Canadians come to retire. The room was full of what one of my millennial colleagues rather ungraciously referred to as “cotton-tops”.

They cheered enthusiastically for local businessman Byron Horner, the Conservative leader’s warm-up act and the candidate in the riding of Courtenay-Alberni that was lost to the NDP in 2015.

“It’s only 36 days until Andrew Scheer is elected prime minister,” he said.

The response was good-natured and courteous but lacked conviction, as if the audience did not really believe that the affable, modest, decent man in front of them has the royal jelly needed to lead and inspire. The problem with electoral politics is that no-one really knows what turns a worker into a queen bee and it is often too late when voters discover their preferred candidate is not equipped for the office.

But Scheer’s lack of sizzle may work in his favour.

The Conservatives have placed all their money on black — as in families and governments being in the black.

Scheer frames the election as a stark choice: “This is about your future. Will this be a country where you struggle to get by, or a country where life is affordable. That’s what this federal election will come down to.”

He runs the risk of being branded a one-trick pony. The repertoire for this particular circus horse has, thus far, been limited to tax cuts and credits, while broader issues like climate change, housing and healthcare have been barely mentioned.

But it may prove that the cost of living is the overwhelming concern of voters and carries this most self-effacing of politicians to power.

On Sunday in Surrey, British Columbia, Scheer unveiled a central plank of his platform — the universal tax cut that will reduce the lowest tax bracket from 15 per cent to 13.75 per cent.

The Conservatives say the average individual will save $444 a year, though some experts suggest the amount will be less. Regardless, its scope means it’s costly — up to $7 billion a year when fully implemented, according to the Parliamentary Budget Office.

Scheer has already announced other measures designed to reduce the cost of living — taking the tax off home heating bills, making maternity benefits tax free, restoring a Harper-era public transit credit and, of course, cancelling the carbon tax (a measure that received wild applause in Parksville, even though its repeal wouldn’t affect B.C., which has its own carbon pricing scheme).

The repertoire for this particular circus horse has, thus far, been limited to tax cuts and credits

Scheer went back to the future again on Monday, announcing in Lake Country, B.C., that a Conservative government would bring back the children’s tax credits for sports and arts.

The broad-based tax cut has been well-received as the most efficient way to put money in the hands of all taxpayers. There will be whinging about the restoration of boutique credits that complicate the tax code. Scheer’s justification is that 80 per cent of middle-class families pay more tax than four years ago — a figment of his imagination based on a Fraser Institute study that somehow omitted to include the $22 billion the government transfers to families through Canada Child Benefit.

But there is no doubt the cumulative effect of the Scheer package would be to increase the disposable income of families struggling with rising prices.

Amidst the artifice and phoniness of the campaign, Scheer hosted a roundtable of voters (presumably Conservative voters) that introduced some authenticity to the proceedings. Regardless of their affiliation, the stories rang true. One man talked about the stress on the family finances that forced him to take a second job to help put his four kids through school. “But the more you work, the more you get taxed,” he said.

The Conservative leader’s problem is that all these spending commitments put even more pressure on the public finances, just as he has repeated his pledge to balance the budget within five years of taking office.

He runs the risk of being branded a one-trick pony

On Sunday, he said a Conservative government would end “wasteful Liberal spending”, such as the $250 million committed to the Asian Infrastructure Bank.

On Monday, he invoked memories of Brian Mulroney’s comment about issuing federal bureaucrats with “pink slips and running shoes” when he said as prime minister he would “control the rate of growth of government departments”.

This is a gift for the Liberals who will revive their attacks linking Scheer and Ontario premier Doug Ford’s austerity measures.

There’s not much about this campaign that is particularly edifying. The mud being slung on day six was about which party had closer links to professional controversialist, Faith Goldy.

Justin Trudeau’s campaign slogan when he ran for the Liberal leadership was Goethe’s invocation to “dream no small dreams”.

Scheer’s weaponization of the tax code does not suggest a leader who dreams big.

Canadians are now faced with a choice for prime minister between a dreamer who tends to disappoint and a more pedestrian but predictable pretender.

'We walked into a buzzsaw': How the most image-conscious prime minister in Canadian history made himself look foolish in India