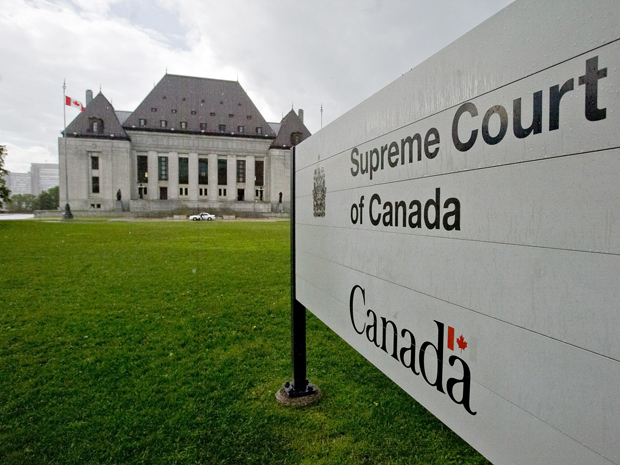 Frustrations inside the Harper government at the recent string of losses at the Supreme Court are in danger of boiling over.
One minister said he had been advised not to get into a public “firefight,” but senior Conservatives are privately incensed and feel the court has blocked Parliament’s ability to make laws.
Rumours about Beverley McLachlin, the Chief Justice, are being shared with journalists, alleging she lobbied against the appointment of Marc Nadon to the court (an appointment later overturned as unconstitutional). It is also being suggested she has told people the Harper government has caused more damage to the court as an institution than any government in Canadian history.
The chatter suggests there is a clear strain between the offices of the Prime Minister and the Chief Justice.
Ms. McLachlin hit back in a statement released by her executive legal officer, Owen Rees. He said she did not lobby against the appointment but was consulted by a parliamentary committee on the government’s short list and the needs of the court.
“The question concerning the eligibility of a federal court judge for appointment to the Supreme Court under the Supreme Court Act was well-known in legal circles. Because of the institutional impact on the Court, the Chief Justice advised the Minister of Justice, Mr. [Peter] MacKay, of the potential issue before the government named its candidate for appointment to the Court. Her office also advised the Prime Minister’s chief of staff, Mr. [Ray] Novak. The Chief Justice does not express any views on the merits of the issue,” he said.
Neither did she make disparaging remarks about the Harper government. “She has stated publicly on several occasions that mutual respect between the branches of government — and their respective roles — is essential in a constitutional democracy,” said Mr. Rees.
A tug of war between the legislative and judicial branches is normal. But five overwhelming losses in as many weeks at the court — on Judge Nadon’s appointment, on Senate reform, and on early parole, among others — has left many Conservative lawmakers wondering who runs Canada.
The frustration in Cabinet and caucus has been visceral this week, kept in check only by an edict from the Prime Minister’s Office not to speak publicly. “The internal wisdom is not to get into a firefight,” said one minister.
But, privately, MPs on the government side of the House are bitter. “It’s clear that Canadians don’t make laws through their governments any more. Instead, they watch while unelected courts override important community standards,” said one MP, speaking about the court’s decision to strike down Canada’s prostitution law. “[Canadians] are powerless to act through their government and left to live by court edict that doesn’t have any public support.”
There were suggestions that the government accepted amendments to its Fair Elections Act before a hostile court threw out much of the legislation on the eve of the next election.
“The left will celebrate this as a triumph — what they couldn’t achieve politically, they have achieved through decades of court appointees,” said one MP, ignoring the fact that the majority of the current court was appointed by Stephen Harper.
One Cabinet minister struggled to stifle his opinion. “I think you can imagine my views. Allan Blakeney and Sterling Lyon were prophets,” he said, referring to the former premiers of Saskatchewan and Manitoba, who fought the introduction of the Charter because they felt it would weaken Parliament’s supremacy. In the 22 years under the 1960 Bill of Rights, just one statute was declared invalid but in the first decade after the 1982 Charter was introduced, 41 statutes were voided.
Another minister mused that the court’s decision to strike down term limits for senators may have been influenced by the fear that similar measures could eventually be introduced for Supreme Court judges, who currently sit until their 75th birthday.
Such are the levels of frustration that senior government officials are musing about how to make the court more transparent and accountable — perhaps by requiring disclosure of expenses that are not publicly documented at the moment. However, they stress they are wary of being seen as vindictive and no action is planned. Short of appointing Vic Toews, the former justice minister and now a trial judge in Manitoba, to the court when a Western vacancy comes open in a couple of years, there seems little that the government can do. There is little upside for Mr. Harper in making the Supreme Court rejection of his policies a political issue.
But while there are frustrations on both sides — the Chief Justice is likely annoyed at the continuing vacancy on the court — a fragile peace is still holding.
“In my view, both parties are behaving appropriately,” said Dennis Baker, an assistant professor in political science at the University of Guelph, who studies the legislative-judicial relationship.
“The Prime Minister has been measured in his reactions to the decisions and has not tried — as some have suggested — to find technical ways to thwart the spirit of the decisions … The Supreme Court has avoided rhetoric of [any] sort.
“Given that the institutions are designed to be in conflict with each other — a necessary function of being responsible for reviewing each other’s actions to some extent — I don’t think there’s anything abnormal or worrying about recent events. It’s just the institutional design at work, in my view.”
Another reversal for the Conservatives, though, and the parliamentary sovereigntists on the government benches will not be so easily muzzled.
National Post