If history tells us anything, this could be Charest's last term as premier 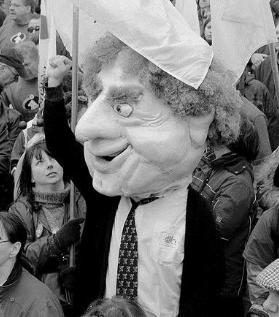 If it quacks like a duck and waddles like a duck, it's a duck. And if it quacks like a duck and waddles with a slight limp, then maybe it's Jean Charest.
Only a few days after the re-election of his Liberal government, this time with a majority, Charest might already be a slightly lame duck as premier.
Tuesday, in his post-election news conference, Charest was asked whether he would seek another term after the one he had received the day before.
Usually, a party leader tries to discourage speculation that he might not intend to remain in his post indefinitely, because it can weaken his authority - in the jargon of politics, turn him into a lame duck.
That's not what Charest did, however. He replied that he is "going to stick around for a long time," intends to "be here for a while" and is "very, very happy in what I am doing."
But he did not quite commit himself to serving his full term and then seeking re-election. "All I can say is that I look forward to the next few years."
It might seem odd that Charest was asked about his future only a day after he'd won a new term. But people in politics are always looking ahead, and some in Quebec were looking ahead to life without Charest.
By now, even we slow learners know better than to underestimate Charest's resilience and luck. As he says, nobody has had his political obituary written so often - sometimes in this space.
On Monday, the Gambler beat the odds by becoming the first Quebec premier since Maurice Duplessis in 1952 to win a third consecutive term. But eventually, even cats run out of lives. And Charest might already be living on borrowed time.
After Bernard Landry's two-term Parti Québécois government was defeated in 2003, Landry explained that the longer a government remains in power, the more small groups of voters it disappoints over one issue or another.
By the end of its second mandate, he said, the small groups of disappointed voters add up to defeat for the government.
That's why some Péquistes are already assuming that their party's return to power in four or five years is inevitable.
And in Charest's own party, Liberals with leadership ambitions who believe he might step down before the next election might start positioning themselves early for the race to succeed him. Leadership candidates who wait for the official starting gun before they run have usually waited too long.
And what if the Gambler himself concludes that he would be pressing his luck to seek re-election? In that case, Charest might start thinking instead about his political legacy.
That could be the "economic space" of free-trade agreements he hopes to conclude with other provinces and European countries, or his Northern Plan to develop the economic potential of Quebec's frontier.
Or, freed of the need to seek re-election, he might be more inclined to make unpopular decisions if he believes they are necessary and will be vindicated by history.
Even though he did not seek a mandate to do so, he might resume the attack on the size and cost of government that he abandoned after his government's near-defeat in 2007. Five years after Charest came to power, recent reports by the conservative Fraser Institute still rank Quebec near the top among the provinces in terms of its tax burden, and the worst in public debt.
The day after the election, Charest was urged by conservative columnist Alain Dubuc in La Presse to use his new majority over his four-year term to "undertake reforms, shake things up, show daring, be an agent of change."
Jacques Parizeau, the Machiavellian former sovereignist leader, once remarked that the numbers into which analysts read great significance on election night really don't matter. As of the day after the election, he said, the only result that does matter is who won.
Charest and his Liberal spin doctors agree. What matters in Monday's election, they say, is not that the majority their party won was unexpectedly narrow, only that it is a majority.
What the Gambler does with that majority might depend on whether he believes he can beat the odds one more time.
Colleague Henry Aubin points out that the U.S. senator who suggested that the way for his country to get out of the Vietnam War was simply to "declare victory and go home" was George Aiken, not William Proxmire, as I wrote on Tuesday. Sorry.

Debate was a flop