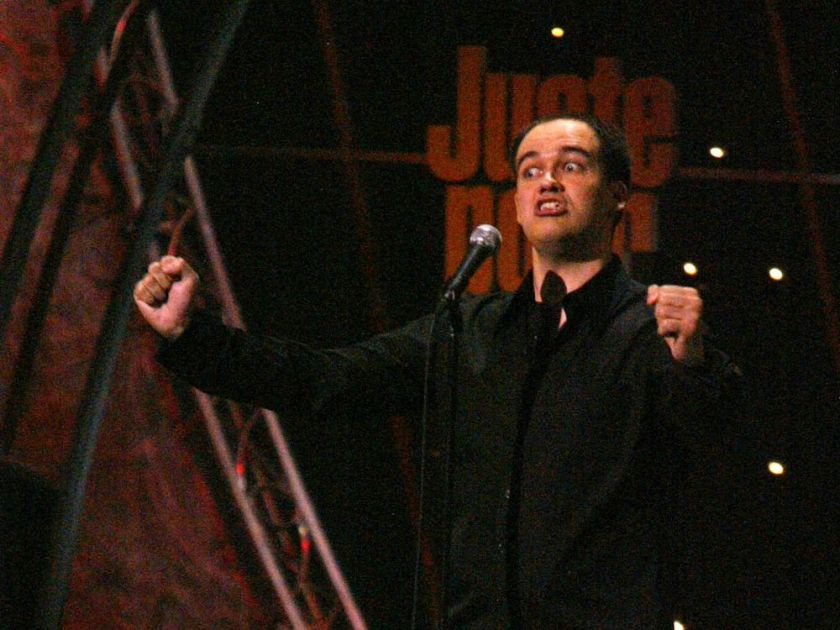 Popular comedian Guy Nantel has yet to enter the PQ leadership race, but already looks like the front-runner.

“René Lévesque is going to turn in his grave,” commentator Luc Lavoie predicted on Montreal radio 98,5 FM. In La Presse, cartoonist Serge Chapleau drew the Parti Québécois founder half-covering a disgusted expression with his hand and saying, “if I understood you correctly, what you’re telling me is that the PQ has become a bad joke.”

It would be an understatement to say there’s skepticism about the possibility of the PQ leadership first held by Lévesque being handed down to a stand-up comic.

To some, Guy Nantel’s possible candidacy for PQ leader is an indication of how far a party that until recent years dictated Quebec’s political agenda has fallen.

Nantel, however, appears convinced that he’s just what the PQ needs. So much so that he’s dictated terms on which he will accept to run for its leadership.

He wants the party to organize the campaign, including candidates’ debates, so that he can keep his scheduled show dates, one of which is on the proposed election night in June.

And while a ticket for one of his shows in a small regional venue can cost $40, he’s afraid fans will balk at paying a $5 PQ sympathizer’s fee to vote for him. So, he wants them to be allowed to vote for free.

One might suspect a stunt. But Nantel, who sold more than 125,000 tickets for his last show, has received several nominations for the Quebec humour awards, and has a popular series of online videos, hardly needs the publicity.

He insists he’s seriously considering running. And judging from a political manifesto he published three years ago, as if anticipating an entry into active politics, his campaign would be no joke.

He’d be following the lead of Volodymyr Zelensky, a Ukrainian television satirist who last year was elected president of his country as an anti-politician.

Some of the proposals in Nantel’s manifesto, Je me souviens … de rien (“I remember … nothing,” a play on Quebec’s motto), are, ah, original, to say the least.

For example, votes in the National Assembly would be taken by secret ballot, and half the lawmakers would be drawn at random from applicants from the public by lottery.

But Nantel’s more conventional Québécois-nationalist positions in favour of independence and on identity are likely to appeal to PQ supporters.

On the issue of the hour in Quebec politics, he describes his position as “hard-line laicity.” He opposes all religious accommodations, and would extend Bill 21’s ban on religious symbols from teachers and other government employees in “positions of authority” to all civil servants.

And he has several advantages over the already declared candidates for the leadership.

As professional politicians are increasingly regarded with suspicion, his lack of political experience is actually an asset. Yet by his profession he is a proven communicator, with name recognition.

To be sure, he would be an unconventional leader. But the PQ, its very survival threatened, can’t afford to play it safe.

Nantel won’t commit himself to running until after the party adopts the election rules this weekend. Whether it meets his demands might indicate how badly it wants him.

But one factor it will have to consider is the buzz that even the possibility of his candidacy has created. While he has yet to enter the race, he already looks like the front-runner.

Scarcely a day went by this week without this potential candidate for the leadership of the fourth party in the Assembly being the subject of an article — or a cartoon — in the media. The actual candidates are sniping at him.

It’s reminiscent of another campaign by a newcomer to politics from the world of entertainment a few years ago.

At first the candidate wasn’t taken seriously, his candidacy dismissed as self-promotion. But his celebrity monopolized the attention of both his opponents and the media, polarizing the campaign, and he captured his party’s leadership.

Who’s laughing at the candidacy of Donald Trump now?