The psychology of Stephen Harper

The Prime Minister is partisan enough to win, but is he magnanimous enough to become a statesman? 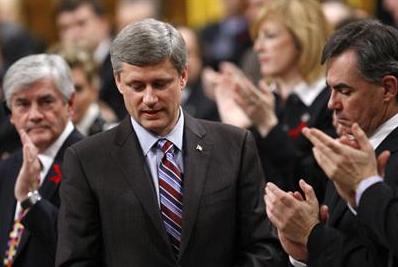 Craig Offman, National Post - The Prime Minister was at his inscrutable best this week.
While his political fortunes were twisting in the wind this past Wednesday afternoon, he came off dour and Nixonian, insisting that the proposed coalition of Liberals and NDP was "a plan to destroy this country." Hours later on a televised address, however, he was smiling and purring, saying that he'd be willing to sit down with his adversaries -- even though some of them were separatists -- all to avoid national discord.
While some blamed Mr. Harper for bringing up the separatist bogeyman that night, the real bogeyman has been Mr. Harper. From appearance to appearance, his behaviour was unpredictable, his rock-hard reason, arbitrary wrath and fleeting moments of graciousness all displayed in quick succession.
In the end, his cooler head might have prevailed, helping him persuade the Governor-General to suspend parliament. He might have even succeeded in destabilizing the coalition that hopes to oust him when the house reconvenes. But there is no telling when he'll stop destabilizing himself.
Some people who know Mr. Harper attribute his behaviour to a sense of unwavering rectitude. Others say that like Pierre Trudeau, he feels that he does not need the job. One political P. R. veteran chalked up his scrappy attitude to a lack of generosity, a quality a leader might need if he wants to survive the hair-trigger sensitivities of minority governments.
"He is unable to live the Churchillian principles of being magnanimous in victory and defiant in defeat," said Daniel Tisch, the president of Argyle Communications. "He's mixed them up."
Harper-watchers say this near-fatal political flaw first showed itself during Mr. Harper's initial campaign as leader, when he let it slip that he thought his party was heading for a majority in parliament; it was a burst of over-confidence that some political analysts said cost him dearly at the polls. Many political scientists believe that he repeated the same mistake during the next election.
Cruising toward a predicted majority against his lame-duck rival Stephane Dion, his sudden attack on cultural subsidies weakened his support in Quebec and damaged the statesman-like image he had carefully cultivated for more than a year -- one that culminated in a fireside election ad in which he wore a sweater vest.
Last month, he arguably created his latest thumb-in-the-eye crisis. A proviso in his economic plan, which called for the eradication of public finding for political parties, put the opposition into a lather, yet again undermining his efforts to present himself as a moderate.
"He got to where he has by being highly partisan and highly disciplined, but to move from a partisan to a statesman, you need a capacity for magnanimity," observed Mr. Tisch, who has advised governments of various political stripes.
Tory-turned-Liberal MP Garth Turner added that even when his former party was wrestling with a minority government, it was acting like a scorched-earth majority, right down to the committees. "I remember a summer retreat in 2006, and a guy from the Prime Minister's Office grabs a mic, and says, 'From now on, committees are war. They are an extension of the House,' " said Mr. Turner, who lost his seat in the last election and has a memoir coming out in April. "It has been divided into the red team and the blue team, and that never happened previously."
Mr. Turner recalled that same confrontational approach when Mr. Harper called him into his office in 2006, when he was putting together his first cabinet.
The Prime Minister offered the outspoken Ontarian a minister's portfolio -- but only if he dialled back his media profile. Needless to say, Mr. Turner did not serve in his cabinet. This approach might seem confrontational to some, but others find Mr. Harper refreshingly candid.
"He's not a politician," said a mentor, Jim Hawkes. "He does not adapt to a popular way of speaking."
Even when Mr. Harper phoned him some 20 years ago to tell him that he was going to run against him as a Reform Party candidate, Mr. Hawkes said he was not surprised. "What you see is what you get," he said.
The two remain friends.
Like some other veteran political observers, Mr. Hawkes said that what Mr. Harper cares most about is policy, that he is a deep thinker who is otherwise indifferent toward Ottawa and the trappings of power.
In that way, it has been argued, the prime minister whom he most resembles is Pierre Trudeau.
"He was clearly someone who went his own way," recalls former Alberta MP David Kilgour, who has known Mr. Harper for decades. "You could make the same charge about Pierre Trudeau."
Harper biographer Lloyd Mackey made the same comparison. "I think the Trudeau mold is a great deal of self-assurance, aloofness, and attitude that 'I don't care what you think.' "
Mr. Mackey, a veteran Hill reporter who runs two faith-based newspapers, said that Mr. Harper's psychology also recalls W. A. C. Bennett, the B. C. premier notorious for coming on very strong and then backing off -- what was then called his 'Second Look.'
"He even looks a little like W. A. C. Bennett," he added.
The Prime Minister, he asserted, is a moral character who sees the world in black and white. But once he's made his point, he's capable of relenting.
"With the [proposal to cut party financing], he made his point, but then suggested, 'Well, let's forget about it for now because we're not going to go anywhere,' " said Mr. Mackey. " 'But there might be another suitable time to talk about it.'"
If his own track record has proven anything, Mr. Harper does not shy from sore subjects.
coffman@nationalpost.com
***
Photo: Canada's Prime Minister Stephen Harper. - Chris Wattie/ReutersCanada's Prime Minister Stephen Harper.