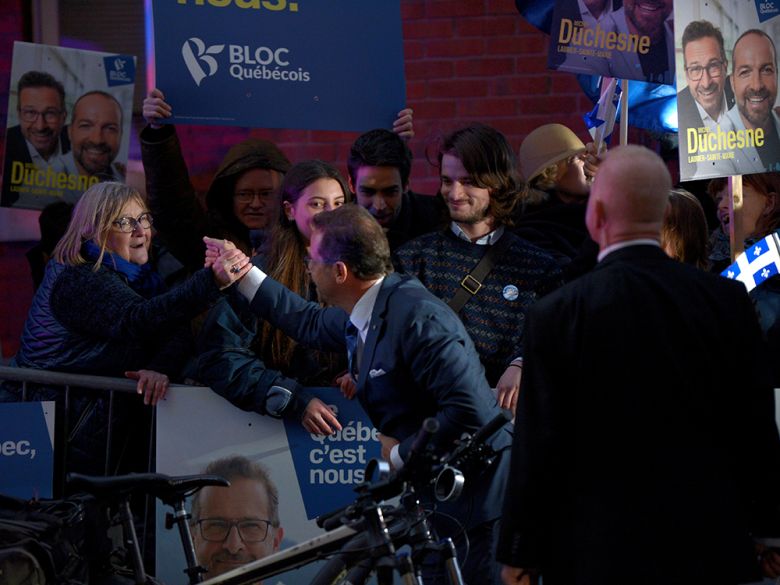 What a strange and unusual country we live in.

On Wednesday a television network in Quebec held a debate. Only four leaders were invited, although there were six parties with seats in Parliament when the election was called.

Although the Green party and the nascent People’s party are each running candidates in more than 300 ridings across the country, neither was asked to take part. On the other hand, Yves-François Blanchet’s Bloc Québécois, which is contesting seats only in Quebec, was welcomed on stage with the Liberal, Conservative and New Democratic Party leaders.

And why would you be, unless you have an abiding fascination in whatever issues happen to be preoccupying a single province out of the 10 — and three territories — that make up this country. The structure of the debate gave an inherent advantage to Blanchet, the separatist, as the one leader focused solely on Quebec, who has no need to show the slightest interest in the rest of the country and who can tailor his platform to curry favour with francophone Quebecers, a subsection of a subsection of the electorate, knowing he’ll never be in power and thus forced to deliver the goods.

Perhaps that’s no surprise, given that TVA, the network that sponsored the debate, is a subsidiary of Quebecor Inc., whose current president and chief executive officer, Pierre Karl Peladeau, is a declared separatist who headed the separatist Parti Québécois before quitting to return to the family firm.

The structure of the debate gave an inherent advantage to Blanchet

Given the degree to which the event was designed to exclude the majority of the country, you’d think some of the more principled leaders might have had qualms about participating. Not a chance. It was, in fact, the first debate Justin Trudeau saw fit to attend. Trudeau blew off two previous opportunities to engage in a discussion of issues, both in English and thus easily accessible to the broad sweep of voters. One went ahead with just three participants, the other, which was to focus on foreign affairs, was cancelled.

He does plan to take part in the sole “official” English debate, the one organized by the independent commission his party established after the 2015 election to bring some order and predictability to what had become a mish-mash of competing forums. For reasons that remain perplexing, it will be the only opportunity English-speaking Canadians have to watch the leaders go head-to-head, and, unfortunately, seems set to repeat all the annoyances that have turned off viewers in the past. With six participants and five moderators, the chances for a prolonged, in-depth exchange of views on crucial issues appear minimal, while the outlook for a lot of rhetoric, interruptions and confusing cross-talk is high. If you like question period, with all its scripted responses and mindless heckling, you’ll probably love the debate.

Quebec, of course, will also get an “official” debate of its own, giving it two chances to assess the candidates, while the rest of the country has to satisfy itself with just one.

The situation highlights the degree to which Canada appears to be sliding carelessly back into the dangerous divisions that troubled it for so long: West versus East, French versus English, Quebec versus everyone. Pierre Trudeau won two majorities by piling up seats in his home province, adding a bunch in Ontario and obviating any need for representation elsewhere. That sparked the resentment across Western Canada that balkanized national affairs for an entire generation, coupled with a separatist push in Quebec that came within a hair of splitting up the country.

Fading interest in separatism among younger Quebecers seems to promise a welcome end to that wearying clash. Yet here we are again being told that the election depends on gaining ground in Quebec, with appeasement the usual route to success. All three federal leaders attest to their disgust with Bill 21, the law banning religious symbols among Quebec public employees, but none is willing to pledge to fight it. Trudeau appeared to hint that a re-elected Liberal government might consider an intervention, but only if it’s safely back in office and doesn’t have to worry about keeping up the happy face of the campaign trail any longer.

While placating Quebec, the Liberal leader launches daily diatribes at Ontario Premier Doug Ford, citing him again and again in hopes some of the venom will spread to Andrew Scheer as well. In demonizing Ford so incessantly he all but guarantees relations with Ontario during a second Liberal regime would explore new levels of frigidity, despite his need for provincial co-operation for the pharmacare plan that is a big part of his platform.

It’s perhaps a sign of how inured we are to accepting Quebec as the special child of Confederation that Wednesday’s debate and all it symbolized raised nary an eyebrow. Or perhaps it’s because so many Canadians have simply tuned out the politicians and are waiting for it all to end. If the goal is to ensure government can go on safe from any intrusion of public interest, it’s working.