Andrew Coyne: Maybe there is a reason why Stephen Harper seems leery of meeting with Kathleen Wynne 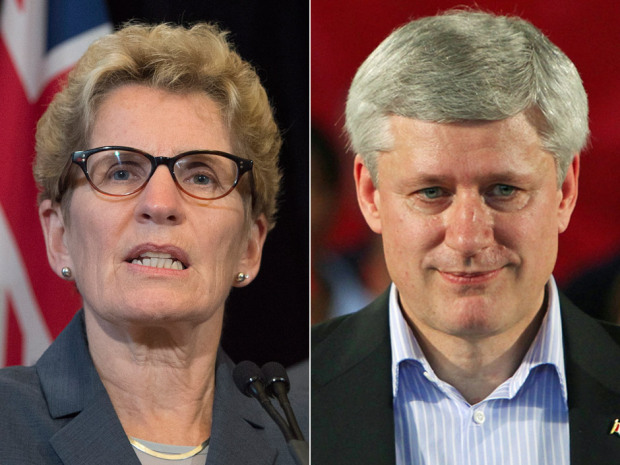 A spectre is haunting Canada, a growing crisis that left unaddressed could tear this country apart. The questions it raises go to the heart of our existence together as a nation; the issues it touches are fundamental, yet pregnant with ambiguity.

I speak, of course, of the prime minister’s failure to meet with the premier of Ontario. For, like, a year. As an exclusive front-page investigation by the Toronto Star revealed Friday, “Prime Minister Stephen Harper has spent more time with Russian President Vladimir Putin this year than Premier Kathleen Wynne.”

The implications are as obvious as they are troubling. To be sure, Ontario has not invaded a neighbouring country and has pledged to use its nuclear technology only for peaceful purposes. But as the premier herself has said, “I think that it is only rational that the prime minister of Canada would want to talk with the premier of Ontario.”

The trouble has apparently been brewing for some time. In August, the Star reported on the premier’s exasperation at not having spoken with the Prime Minister in the “78 days” since she was re-elected. (“To be fair to him, I haven’t specifically asked for a conversation.”) By early November, the paper was reporting the two had chatted the previous month, but before then “had not talked in more than six months.”

A couple of weeks later, things reached Defcon Four: It was reported the premier had just written the prime minister a letter demanding a meeting. Worse, it emerged that she had written him a similar letter in September, to which he had only just replied. (Can you believe it? What was he doing all that time, besides sending troops into battle and closing a trade deal with Europe and giving a speech at the United Nations and travelling to China and meeting the G-20 and ducking the odd bullet?)

You can see the premier’s dilemma. Here she is with a clear, focused agenda — described at various times in recent weeks as involving pensions, infrastructure funding, federal-provincial transfers, internal trade, a possible Chinese currency trading hub in Toronto, the Ring of Fire mining project, Employment Insurance, and violence against aboriginal women — and yet the prime minister refuses to meet in person with her. I know what you’re thinking: Why doesn’t she just pick up the phone and call him? But then how would she be able to tell if he was smirking?

That, you’ll recall, was the upshot of their last meeting, a year ago this week. The premier had demanded the prime minister sign on to her pet project of an expanded Canada Pension Plan, a proposal that would force a great many people of modest means who already have satisfactory pension arrangements to put aside money they can ill do without, in order to fix a problem affecting a small number of under-savers, mostly upper income — or, as in the case of her proposed provincial variant, to finance her as-yet-unfunded public works plans.

To which he allegedly “kind of smirked.” How do we know what went on in a private meeting? Because the premier blabbed it all over Ontario, that’s why, in the course of an election campaign that in its early days was heavily focused on attacking the federal government in general, and the prime minister in particular. The premier was bent on depicting her pension proposal, not as a forced saving plan, but as a benevolent gift of government — which obliged the prime minister to play the part of heartless smirker.

I can’t imagine why this breach of confidence-cum-personal attack would have made him leery of meeting with her. After all, the premier has said at regular intervals, “No matter who’s the prime minister of Canada or who the premier of Ontario is, there should be a good working relationship… It’s a much better situation when the prime minister of Canada and the premier of our country’s biggest province are working together… It is disappointing to me that there has not been a closer relationship.”

So when she and other members of her government attack the feds at every turn, blaming it for all of the province’s economic woes (sample headlines: Wynne slams PM for ‘one at a time’ approach to dealing with provinces; Wynne blasts Ottawa’s infrastructure plan; Wynne attacks Harper, says Hudak won’t stand up to PM etc etc) we must assume this is her way of working on the relationship.

The thought occurs that the premier seems less interested in actually meeting with the prime minister than in complaining about being unable to meet with him. It can’t be entirely coincidental that the worse the province’s finances have got, the louder the din has become, culminating in that stagey release of letters between them (private correspondence being about as confidential, it appears, as private meetings) in the same week as her finance minister was confessing — well, pretending otherwise, to be precise — that the province was nowhere near to balancing the budget or even meeting its own leisurely schedule for deficit reduction.

Perhaps the smart thing for the prime minister would be to meet with her, just to take away a squawking point. But you know what would happen. The week prior to the meeting would be taken up with media speculation over whether the prime minister would “deliver” on whatever preposterous demand the premier thought to bring with her that week: Lately it’s about shovelling more money at General Motors to “save” the jobs that were supposed to have been saved by the $10-billion bailout.

So the prime minister could either cave, and set the stage for every other premier to demand the same. Or he could refuse, and be subjected to further personal abuse from the always-ready-to-co-operate Ms Wynne. As I say, I can’t imagine why he would want to pass up on that opportunity.