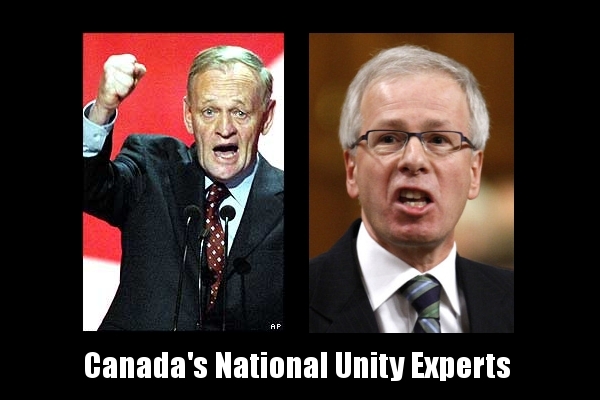 In 1996, Liberal Prime Minister Jean Chrétien and his unity minister, Stéphane Dion, put forward the view that if Canada is divisible, so is Quebec. It was an endorsement of the principle of partitioning the province after a separatist referendum victory. If regions of Quebec such as the north, the Outaouais and parts of Montreal voted to remain in Canada, Ottawa would support them.

Where do the Liberals stand today? In an e-mail exchange, Mr. Dion, now serving under Justin Trudeau, reaffirmed the position. “I, of course, continue to maintain the same view, even more that the Supreme Court has confirmed it.”

He quoted the Supreme Court’s 1997 decision on Quebec secession, which said that it cannot be carried out unless the government of Canada has addressed relevant circumstances, “including the division of assets and liabilities, any changes to the borders of the province, the rights, interests and territorial claims of the aboriginal peoples of Canada, and the protection of minority rights.”

Mr. Dion said the Liberal Party of today, while wishing to “avoid incendiary language” about partition, “agrees with the full content” of this decision relating to the secession of Quebec.

In a 1995 House of Commons debate, as a Reform Party MP, Mr. Harper said that “obviously, given the ethnic and socio-cultural makeup of modern Quebec society, only the pure laine Québécois could arguably be considered a people.” He added that “if the Québécois pure laine are a people and they have a right to secede, they could not claim the right to territorial integrity.”

In a private member’s bill the following year, Mr. Harper advocated that on a referendum ballot, there should also be a second question. “If Quebec separates from Canada, should my community separate from Quebec and remain a part of Canada?”

Asked whether Mr. Harper still holds to these views, his communications director declined to respond. The PM has let it be known he doesn’t wish to be drawn into the Quebec election campaign.

As for New Democratic Party Leader Thomas Mulcair, he said through a spokesperson that he favours a constructive, optimistic approach but didn’t specify whether he would support a partition process after a referendum.

It is a highly sensitive and polarizing issue. Laying out the partition consequence can work negatively for Ottawa, triggering separatists’ ire and mobilizing them. But it can also serve as a great deterrent to the contemplation of secession. A partition of northern Quebec, where the Cree and Inuit particularly oppose being forced to separate from Canada, could result in a loss of two-thirds of the province’s land mass.

In addition to the Supreme Court ruling, further complicating matters is the Conservatives’ own 2006 Commons resolution saying that “the Québécois” form a “nation” within Canada. Given Mr. Harper’s definition of “Québécois” as pure laine francophones, how does this affect the question of territorial integrity? Would it enhance the case for partition in areas where a majority of anglophones and allophones reside?

It was Liberal Leader Justin Trudeau’s father, Pierre, who famously uttered the incendiary remark that “if Canada is divisible, Quebec must also be divisible.” He said it shortly before Quebec’s 1980 referendum.

Sovereigntists hold to the view that international law guarantees Quebec’s territorial integrity. At the Bélanger-Campeau Commission in 1992, a panel of international law experts commissioned by the Quebec government lent credence to this view.

But developments since that time have created a thicket of ambiguity on a question that could come to be critical for the federation. Partition is the elephant in the room – the leaders of the federal parties don’t want to talk about it during the Quebec election campaign, lest they ignite sovereigntist passions.

But in the event the Péquistes win a majority, the case for partition would be sure to confront them.