Why something called the spending power matters


When Stephen Harper was president of the National Citizens Coalition, he signed a manifesto known as the "firewall" letter: Keep the federal government out of Alberta, and let the province run its own affairs.
Whether firewalls or watertight compartments - that the federal government and the provinces live in their own worlds and never the twain shall meet - Canada's leaders have been engaged for generations in an ongoing discussion about who does what.
What's different today is that, for the first time in our history, we have a prime minister and a cabinet talking openly about giving up the game for the federal government. It is widely rumoured that this gruel of ending the spending power of the federal government implicit in the BNA Act and long upheld by the courts will be fed to the House of Commons in the coming Throne Speech. Bloc Québécois Leader Gilles Duceppe has now made this one of his conditions for propping up the Harper government.
Many might yield to a collective yawn about all this. What could be so bad about a federal government's agreeing not to spend money in "areas of exclusive provincial jurisdiction"? Looking backward and forward, we can find a simple answer: a lot.
Confederation was not a compact between two peoples or a carve-out by a few principalities. It provided for effective governments in the context of a rural country stretching 5,000 kilometres. Our history since then has seen the National Policy, two world wars, national pension, unemployment insurance, support for universities and colleges, national hospital insurance, the Canada Assistance Plan, a national housing policy, urban initiatives, medicare and, most recently, a new deal for cities and a national child-care policy that was shut down by the Harper Conservatives.
Whether introduced by Conservatives (progressive or otherwise) or Liberals (in majority or minority governments), our history as a country has been marked by moments of a pan-Canadian vision led by federal governments with the support of Parliament and people.
This is what Mr. Harper wants to end, either by constitutional amendment or federal-provincial agreement. For the first time, we have a national party - the Harper Conservatives - ideologically committed to a fundamentalist misreading of our history and Constitution, and a separatist party only too happy to reduce the Canadian government to a marginal role, just before, in their sad dreams, it disappears altogether.
It is ironic that Europe, which the separatists often use as their foil to our own allegedly centralized federation, has a far more activist role for the Brussels government in higher education and research, and in enforcing a truly common market across the continent. We have a federal government that begs for fewer barriers between provinces when it could knock them down if it wanted, and that gets spooked every time it asserts its historic responsibilities for the health and well-being of the country and its people.
Mr. Harper is taking us where even R. B. Bennett would have been afraid to tread. Canadians who want their federal government to support early childhood education, decent housing, cities that work, a healthy environment, new initiatives in health care, more mobility for students, better research and stronger universities should be appalled at this emasculation. The vision of a fairer, greener and more prosperous Canada that Liberal Leader Stéphane Dion has rightly put at the heart of modern liberalism requires a federal government that dares to speak its name and exercise its powers.
Some say such a message is unacceptable to Quebec. Mackenzie King and Louis St. Laurent weren't intimidated by Maurice Duplessis, and Lester Pearson found ways of accommodation that allowed the Quiet Revolution to flourish at the same time as the country made great social progress. Sir John A. Macdonald would not recognize Mr. Harper's narrow version of what a Canadian government should do. Quebeckers need to have the choice of a vigorous and progressive federalism clearly presented to them.
Thirteen fiefs putting up more walls and moats between themselves and their neighbours does not make a country. If the next session of Parliament becomes a battleground on this issue, so be it. Mr. Harper's Ayn Randist fantasies need to be put to rest. We don't need another trip down the lane of constitutional definitions.
The great issues of the future will be in areas never dreamed of in 1867. We need the flexibility, the courage and the capacity to deal with them without the harnesses and ideological trappings foisted on us by this strange duo of Mr. Harper, who doesn't believe in government, and Mr. Duceppe, who doesn't believe in Canada.
Source 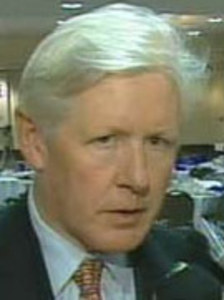 Why something called the spending power matters