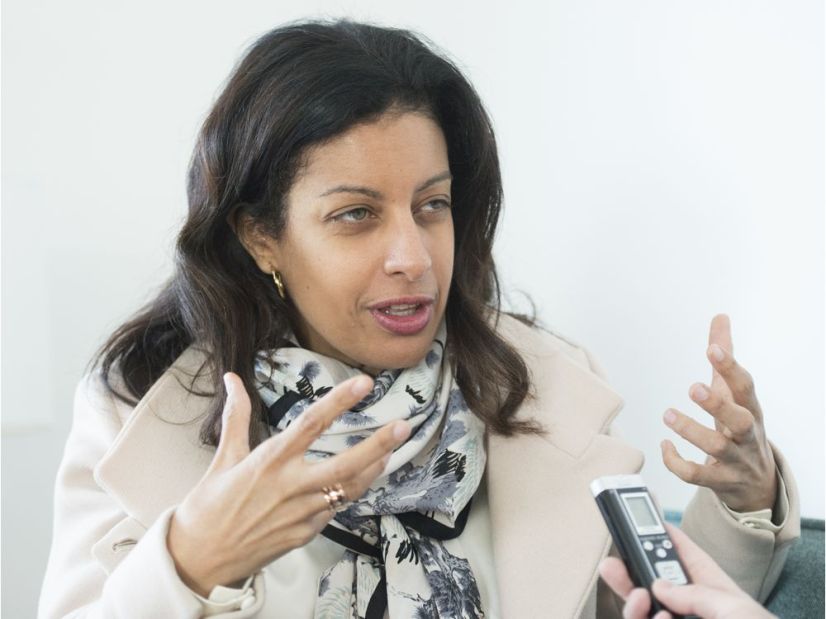 Dominique Anglade, MNA for St-Henri—Ste-Anne, said her bid for leader of the Quebec Liberal Party is gaining momentum.

Dominique Anglade says she has all right stuff to become the next leader of the Quebec Liberal Party.

Anglade, who is vying to become the party’s first female leader, sat down for an interview with the West Island Gazette at a coffee shop in the Pointe-Claire Village on Sunday. She was joined by local MNAs Greg Kelley and Carlos Leitão, who’ve both declared their support for Anglade who served as a cabinet minister in the former Liberal government of Philippe Couillard.

Later in the day, Anglade took part in a Liberal leadership forum at John Abbott College, along with leadership hopeful Alexandre Cusson, the mayor of Drummondville and former president of the Union of Quebec Municipalities (UMQ).

Anglade, the MNA for Saint-Henri—Sainte-Anne, said her candidacy is gaining momentum.

“Every day we have more people than the day before,” she said. “Every single day. If you look at the support we’re getting, it’s from all over Quebec.

“When I deposited my candidacy, we were asked to present 750 signatures. I had close to 1,400 and close to 600 new members in every single riding. So we have 125 ridings in Quebec and we had signatures from every one of them. This just tells you that people are appreciative of who we are as a team and who I am as a leader, but also what we’re saying is making sense to them.”

The party will select a new leader May 31 in Quebec City and Anglade says she is the best candidate to move the party forward followings its crushing defeat to François Legault and the Coalition Avenir Québec in 2018.

“The leader of the party has the ability to unite people, to rassembler. Over the years I‘ve demonstrated I’m capable of uniting people of different backgrounds on the economy, social (issues), attracting younger people, I’m the best person to do that.”

The 46-year-old Anglade was born in Montreal and grew up in N.D.G. Her parents immigrated from Haiti. She said too much is being made of the fact that she hails from Montreal, the power base of the Quebec Liberal Party, while her rival Cusson is from Drummondville.

Although Quebec Liberal party was decimated by the CAQ in the regions outside of Montreal in the last election,  Anglade is not worried about being labelled as the party’s “Montreal” candidate.

“We are getting the support of people from all over Quebec, not just Montreal or the regions,” she said.

Asked how she can reassure anglophones the Liberals will not take their vote for granted, she replied:  “I think it’s not so much in saying things, it’s about being here and meeting with people. It’s about being present in the West Island —  I’ve been present quite a bit — and never being taken for granted.”

She said she’s heard from anglo voters who now regret voting CAQ in the last election. “They said, ‘We thought honestly it would be a good lesson for the Liberals but . . . now we think it’s worse than the PQ’.  It’s not the first time I’ve heard this: The CAQ is worse than the PQ.”

“She’s a fresh face,” he said. ”She’ll be able to crack into those younger voters and millennials.”

Kelley said he’s gotten to know Anglade since the last election and said she can bring Quebecers of all backgrounds together, despite the identity politics that exist today.

“I still like to think in a more positive way, that people will look and see she’s a child of immigrants who came from Haiti, is a francophone, and has grown up in that sense and integrated into society.

The WHO says the virus that causes the respiratory illness can still be fought but some countries are struggling with a lack of resources and some with a lack of resolve.
According to evidence submitted by the Crown, the child had been stabbed 32 times and possibly strangled.
Only eight per cent of Quebecers polled say they are buying extra food and household items, compared with the Canadian average of 17 per cent.