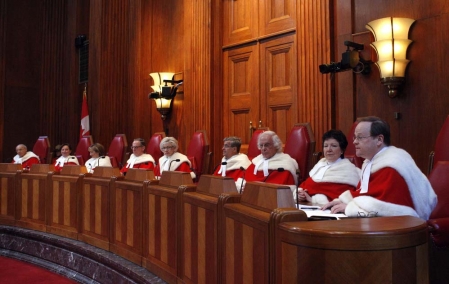 The Parti Québécois government, gearing up for a possible election and therefore especially anxious to attack Ottawa, has launched a legal challenge against Justice Marc Nadon’s appointment to the Supreme Court.
The PQ claims that Justice Nadon has been living outside Quebec for a long time, hasn’t sat on a Quebec court (he sat on the Federal Court) and hasn’t practised law in Quebec for two decades. As such, the PQ insists that Justice Nadon, who sat on the Federal Court, does not meet the special requirements for the three civil law judges from Quebec guaranteed under law for the Supreme Court.
The Quebec challenge misses the telling point: Justice Nadon is undoubtedly a nice man and perhaps a competent judge, but he is not qualified enough to sit on the Supreme Court of Canada. Residency questions aside, his record in law and on the bench does not make him what the Supreme Court needs. His is at best an ordinary appointment, and at worst sub-par.
The workload of a Supreme Court judge is a killer, especially the preparation and writing of judgments. Yes, there are clerks who help justices perform their tasks. But judging at the very highest level is intellectually challenging and of consequence for all Canadians.
We live with Supreme Court rulings in our daily lives. The institution helps shape the country. Supreme Court judges are often around longer, sometimes much longer, than elected officials. Only the very best will do.
Justice Nadon was a supernumerary judge at the age of 64. For those not familiar with the term, it means he was part-time. Supernumerary judging is one of the biggest boondoggles in the public sector. It allows judges, after a period of full-time service, to collect salaries while working only part-time.
Going supernumerary is what many judges do when they want partial retirement. If Justice Nadon was in semi-retirement at 64, how is he going to handle a Supreme Court judge’s workload?
Justice Nadon practised law in Montreal before his appointment to the Federal Court. Nothing in his practice suggests the kind of career that characterized Supreme Court justice John Sopinka, who was one of Canada’s top litigators. Nor does it compare to the outstanding litigation career of Guy Pratte, another potential Supreme Court nominee.
Justice Nadon has no record of academic contributions to the law, unlike Nicholas Kasirer, the former law dean at McGill. He did not serve on the Quebec Court of Appeal, which usually deals with far broader issues than the Federal Court. Civil law cases are more likely to bubble up through the provincial court system than the Federal Court, and Quebec judges on the Supreme Court must be among the best at civil law.
There have been previous nominees from the Federal Court, but most have been people of remarkable accomplishment. Frank Iacobucci, for example, moved up from the Federal Court, but he had been federal deputy minister of justice, vice-president of the University of Toronto and a law scholar of note. On the Supreme Court, he wrote decisions that shaped the country, such as extending equality rights protection for gays.
It is said that Justice Nadon has a special knowledge of maritime law. Which is good, except that maritime law cases might make it to the Supreme Court once in a quarter-century.
He did pen a decision siding with the federal government in a case involving convicted Canadian terrorist Omar Khadr. Perhaps this recommended him to a “law and order” government – who knows? All the government keeps saying is that he is well-qualified, without pointing to a single thing in his career that makes it so.
There were very highly qualified judges in Quebec – many of them female – who lawyers and law professors believed had earned a Supreme Court nod. It could be that they were asked and did not want to move to Ottawa.
The Commons committee charged with questioning Justice Nadon was given just two days to prepare and flubbed the job by not asking hard questions. The country’s law associations and professors knew so little about such an unknown judge that they fell silent. The Supreme Court deserves better.