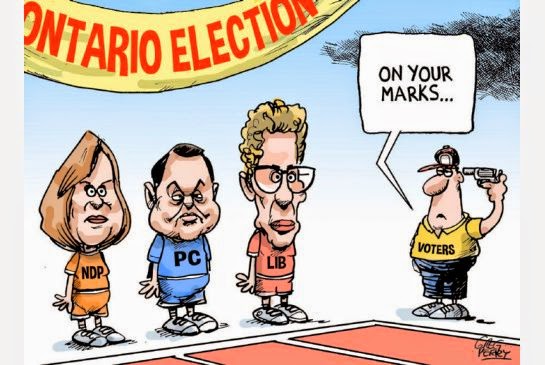 Here’s a guess: Turnout for Ontario’s June 12 election will be its lowest ever.
A whole lot of people, even politically interested ones, will be confronting three mediocre choices. If “none of the above” appeared on the ballot, that option would likely win.
While the parties sprinkle the province with slogans and largely silly policy ideas (about which more next week), Ontario’s long-term predicament looms. The disconnect between them and the province’s reality is alarming. If the country’s most populous province can’t do better, a lacklustre performance will hurt all of Canada.
Attached to the last budget, the provincial Ministry of Finance added a 191-page door-stopper about the long-term economic challenges. Of course, the document was gilded with political gloss, but fighting through it did offer a sobering portrait, one almost entirely absent from the campaign.
Start with economic growth after inflation. From 1982 to 2013, it averaged 2.6 per cent. From 2014 to 2035, it will be 2.1 per cent. Roughly speaking, therefore, growth will be about 20 per cent slower.
The labour force will grow more slowly largely because of an aging population, a change being felt throughout Canada. Labour productivity will be flat at best, and quite likely lower than from 1985 to 2000. In the meantime, global competition will intensify.
Manufacturing has been declining as a share of the economy in North America and Western Europe. Ontario’s decline was halted temporarily back when the Canadian dollar plunged to nearly 60 cents, but those days are long gone.
The province’s cost competitiveness – this is one of the two or three central challenges – has been poor. Unit labour costs have gone up by a little over 5 per cent per year over the last 13 years, compared with just over 2 per cent in the United States.
When a province’s unit labour costs rise more than twice as fast as the country where it does 78 per cent of its trade, the results are obvious: plant shutdowns, unemployment and not enough new capacity added. Automobiles are the classic case: plant openings in Mexico and the U.S., but none recently in Ontario.
Business investment in machinery and equipment has lagged the Canadian average and is far below the United States. Research and development, a pathway to innovation, also lags. It’s better than the very poor Canadian average, but far below the U.S. Take away the healthy financial sector and the Toronto’s overheated housing market, and what do you have?
In Toronto and Ottawa, where prosperity is sustained, it’s easy to forget the swaths of the province in the southwest, north and east, where very little new economic activity has been taking place. The old industrial cities – Hamilton, Windsor, St. Catharines, Thunder Bay, Sudbury, Sault Ste. Marie – and smaller cities, such as Leamington, are nearly all suffering in one form or another.
For most of the past quarter-century, Ontario provincial governments have run deficits. Slowly, the debt has risen. Such is the situation that Ontario now receives yearly small payments from the country’s equalization scheme. (And such is the absurdity of the scheme that Ontario taxpayers remain net contributors to Ottawa, which then turns around and gives a small portion of the revenues back in equalization.)
The Ontario government has reached far, but failed to execute: clean energy, gas plants, e-health, Ornge air ambulance, nuclear cost overruns. No wonder trust in government is low. For almost a decade, the Liberal government let health-care spending rip – 7-per-cent yearly increases without commensurate improvements in the system. (Spending increases are now down to 2.5 per cent a year.)
Very, very powerful – and very, very conservative – public-sector unions and associations in schools, universities, health care, policing, firefighting and municipal government make change very, very difficult. Taking on these interest groups has frightened governments, which have preferred to buy peace instead.
Ontario’s domestic raw-material or hydro energy sources are just about tapped out. An important boost could come with exploitation of the Ring of Fire chromite deposits in the province’s far north, but this project and others will be tied up for years, even decades, by aboriginal claims.
Contrasting all this with what the parties are saying is what drives up support for “none of the above.”