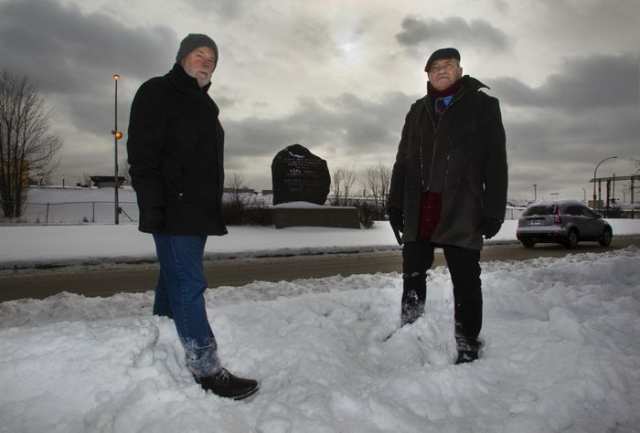 According to members of the Montreal Irish community, the mayor also indicated she might be willing to reconsider her controversial proposal to name the future REM station in Griffintown after late premier Bernard Landry.

Members of the local Irish community are optimistic about the prospects for a proposed memorial park to honour Montreal’s Irish famine victims after meeting with Mayor Valérie Plante last week.

Plante expressed willingness to reroute part of Bridge St. so the park can be created on the site where up to 6,000 Irish immigrants died of typhus in 1847-48, according to some of those present at the meeting at city hall office on Wednesday.

She also indicated she might be willing to reconsider her controversial proposal to name the future Réseau express métropolitain (REM) station in nearby Griffintown after late premier Bernard Landry, according to people who attended.

“She said, ‘Yes, it’s our intention to move Bridge St. Yes, we’re 100 per cent committed to do a study on moving Bridge St.,’ ” said Victor Boyle, a director of the Montreal Irish Memorial Park Foundation, who attended the meeting with co-director Fergus Keyes. The foundation has been fighting for more than a decade to create a commemorative park on the site.

In November, archeologists for the REM discovered the remains of more than a dozen people while digging near Bridge St., where the future light-rail system is being built. The discovery came as a vindication for members of the foundation, who have strived to bring the unmarked cemetery to public attention and create a small park around the Black Rock memorial to the typhus victims.

The Black Rock is the world’s oldest Irish famine memorial. In 1859, workers building the Victoria Bridge installed and inscribed the giant boulder to honour the thousands who fled Ireland in overcrowded coffin ships in 1847-48, only to die of typhus on Montreal’s waterfront. At the time, Bridge St. did not exist.

Today, the boulder sits on a median between traffic lanes in the busy commuter artery, where most people driving by barely notice it.

Speaking to reporters after a news conference Thursday, Plante refused to confirm that her administration is willing to reroute Bridge St. so the memorial park can go ahead, saying Wednesday’s meeting was private.

However, she acknowledged the present location of the Black Rock is unsuitable because people have to cross the fast-moving street to get to it.

“Our goal as the city is to make sure that the Black Rock is in a place that will be easily accessible, because right now it is absolutely not accessible,” Plante said.

However, other sources that attended the meeting also confirmed the mayor made it clear the city is open to moving the road, barring technical obstacles or objections from other institutions involved in redeveloping the area.

Hydro-Québec, which is building an electrical substation nearby, has been extremely supportive of the memorial park, for which it has agreed to cede 1.5 hectares of its site.

The mayor said at the meeting that the city will carry out a study on rerouting the road by 2021.

However, Boyle said it’s crucial to carry out the study as soon as possible, since the configuration of Bridge St. could affect multiple projects underway in the area, where the Goose Village neighbourhood stood until its demolition in 1964.

“We would like to take advantage of economies of scale, and if the city is doing construction with regard to any of these projects, let’s roll it out at the same time,” he said. “So we’re hoping the study isn’t dragged out.”

Boyle said Plante was initially adamant at the meeting that the REM station should be named after Landry, but after hearing the concerns of those present, she agreed to consider the options.

“Fergus made an excellent point. He said, ‘I’m not arguing as an anglophone or as an Irish descendant. I’m talking as a Montrealer who knows Montreal history. That in and of itself should stop you from putting Bernard Landry’s name on that REM station.’ And she listened,” Boyle said.

Boyle said the foundation is not proposing to name the station after anyone else.

“It should stay Griffintown station,” he said.

The Montreal Irish Memorial Park Foundation’s favoured option for the park would be to locate it where the Black Rock now stands, and to reroute the road east of there. The park would include a pool to evoke the immigrants’ ocean crossing, a paved walkway, an agora, panels explaining the significance of the site and a vegetable garden to evoke the failed potato crop that caused the famine.

The panels would focus not just on the suffering of the Irish, but also on humanitarian efforts to care for them. Many Montrealers died while nursing the sick, including nuns, priests, doctors and the city’s mayor at the time, John Easton Mills.