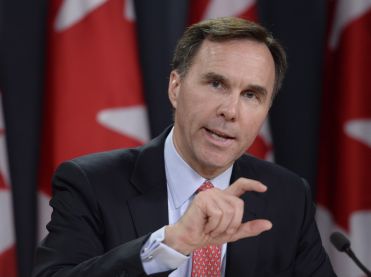 Bill Morneau says he expects to announce changes in the coming weeks to improve the federal fiscal-stabilization program, as Alberta continues to press for a $2.4-billion payment to make up for lost oil and gas revenues.

The Finance Minister said he understands concerns from provincial governments that the program, which has not been substantially updated since the 1980s, is outdated and cannot sufficiently respond to sudden economic challenges. Fiscal stabilization was designed to help provinces that face sudden decreases in revenues, as Alberta did when oil prices crashed several years ago.

“We continue on our analysis and I’m sure that we will be continuing a discussion, which will be founded on how we can improve the program to make sure it has its original intent, which is to help provinces as they go through significant fiscal challenges,” he told reporters Sunday at the start of a federal cabinet retreat in Winnipeg.

“We heard from the Western provinces, but we also heard from all of the provinces that they would like us to look at the fiscal-stabilization approach.”

Mr. Morneau said he is still aiming to respond to the provinces’ demands for reforms by the end of the month.

Alberta has been pressing for changes to the program, as well as $2.4-billion that the provincial government says it would have received if payments weren’t capped at $60 per capita. That money, which Premier Jason Kenney has referred to as an “equalization rebate,” is among a list of demands from Mr. Kenney’s government made since the federal election.

Alberta Finance Minister Travis Toews said he believes that the federal government is serious about responding to that request.

“I’m confident that we’ve made our case well and that the federal government has listened to our concerns,” Mr. Toews said in an interview before the cabinet retreat began.

“We would hope that there would be a definitive decision.”

The cabinet retreat is occurring at a time of heightened anger and resentment in the Prairie provinces. The Liberals were shut out of Alberta and Saskatchewan in the October election and lost seats in Manitoba.

Mr. Toews said his government has been encouraged by apparent efforts from the Trudeau government to mend relations with Alberta, but he said the province is looking for real progress on issues such as changes to environmental laws passed last year, rather than symbolic gestures.

“We certainly heard some positive language following the election that Canadian unity was important, that the federal government had concerns about Western alienation,” he said.

“But at the end of the day, we need to see substantive action. That’s what will speak to Albertans.”

Saskatchewan Premier Scott Moe has said there are “fires” of alienation burning in the region and called for a “new deal” for his province, making similar demands as Alberta. Manitoba Premier Brian Pallister has been less confrontational, although last week he said the federal government needs to show action rather than photo-ops.

On Monday, the Prime Minister was scheduled to meet with Mr. Pallister, whose office said he planned to raise a number of issues including the carbon tax, health-care transfers and Indigenous child welfare.

Despite those overtures, federal Environment Minister Jonathan Wilkinson showed little willingness to provide more flexibility on the carbon tax, which is imposed on provinces that do not have a plan that meets Ottawa’s minimum requirements for carbon pricing.

“The price on pollution is a national program, it works in part because it is national in scope. One of the fundamental basis is that it actually has a stringency that is similar across provinces,” Mr. Wilkinson said.

He added that his government will propose a plan in coming months for more ambitious greenhouse gas reduction targets by 2030.

With reports from Kelly Cryderman