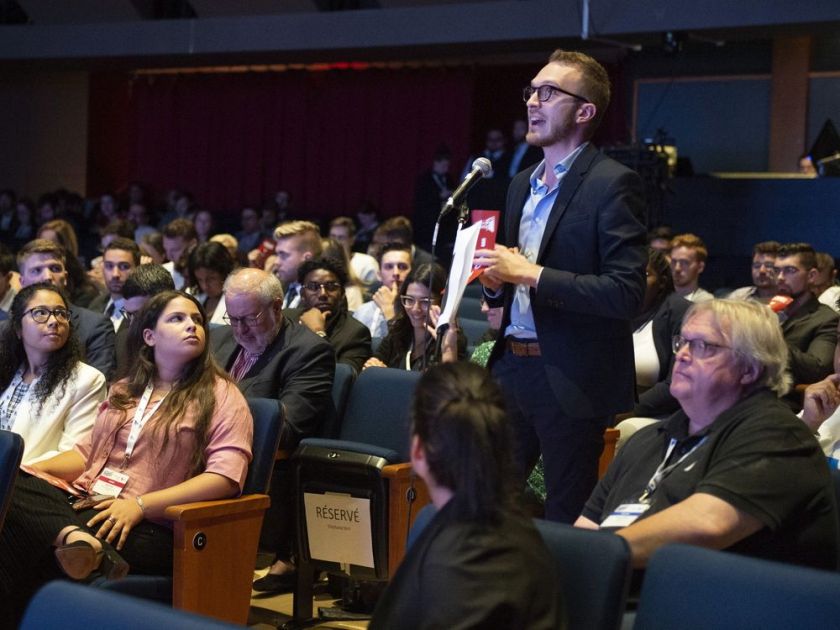 Many Quebec Liberals have arrived at the conclusion that the party’s rather significant defeat in the 2018 provincial election was the result of a very deep disconnect with the francophone majority. The discussions and proposals that emerged at a meeting of Quebec Liberal youth this past weekend were marked by a sense of urgency to identify ways to reach out to francophones.

The president of the Quebec Liberal youth wing, Stéphane Stril, stated that “We cannot deny the fact that for many Quebecers we (Liberals) had drifted from a certain way to see Quebec and our relation with the Quebec people.” He went on to say that “Il va falloir qu’on pose des gestes concretsen faveur de la majorité francophone, de qui on est en tant que nation.” There’s a lot of ambiguity there, so it is open to multiple translations, but what seems clear is that the focus is on taking action to appeal to the francophone majority, which is equated with what makes Quebec a nation.

That line doesn’t reflect the inclusive “political party of all Quebecers,” as the Liberals refer to themselves on the party website. And the description of interculturalism as put forth by the youth wing, which makes no explicit mention of either anglophones or the English language, is quite ambiguous. This version of interculturalism states that French will be the language of all intercultural contact while at the same time ensuring that the Quebec nation will reflect all its elements, notably the francophone majority, its cultural and linguistic minorities and the Indigenous peoples. At the same time, it proposes that ethnocultural diversity be respected by promoting the recognition and reinforcement of Quebec culture.

In terms of their share of the popular vote, the 2018 results were indeed the worst loss suffered by the Quebec Liberals since Confederation. But there have been times the Liberals have had fewer than the 29 seats that they now hold. During the 1976 victory of the Parti Québécois under René Lévesque, the Liberals were left with 26 seats, and in the 1948 victory of Maurice Duplessis’s Union nationale the Liberals won only eight seats. While it it is true that there were fewer seats overall in the Assembly in those two elections than there are now, there were also fewer parties vying for support.

Whether it was in 1948, 1976 or 2018, the governing parties and many pundits taxed the Liberals as the party of the minorities or the “parti des Anglais.” But the Liberals have overcome what some regarded as dire political situations, and have been returned to power with a coalition of non-francophone and francophone voters. It is true that in the process of sustaining this coalition, Liberal governments have introduced measures that made non-francophones feel uneasy and taken for granted.

Many Liberals seemingly wish to rival the Coalition Avenir Québec’s populism, by employing identity-based rhetoric and using vague and sometimes contradictory language about diversity and intercultural relations. It’s a strategy that is unlikely to succeed, as in the current political climate the real debates are around such things as Bill 21 and immigration levels. If the Liberals choose to compete with the CAQ’s populist approach, there is a serious risk that non-francophones will become disenchanted with them and unwilling to look the other way for the promise of electoral gain.

A desperate Liberal effort to reconnect with francophones risks a disconnect with non-francophones and an eventual inability to lay claim to the title of being the political party of all Quebecers.

Jack Jedwab is the president of the Association for Canadian Studies. He lives in Montreal.