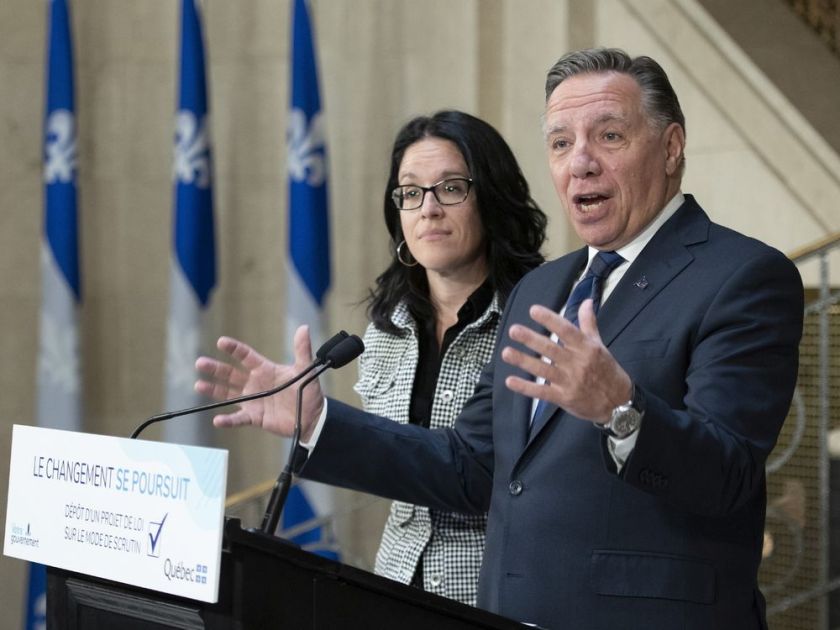 Rarely has a government shown so little enthusiasm for its own proposal as the Legault government for its bill to change the voting system.

So, apparently, we’re to have a referendum in Quebec — maybe — like the one in Great Britain in 2016 on Brexit. No, not on seceding from Canada; rather, on a proposal that the government calling the referendum hopes will be rejected.

Rarely has a Quebec government shown so little enthusiasm for its own proposal as the Legault government this week when it presented its bill to change the voting system.

Basically, here’s how the new system would work:

The present 125 ridings would be replaced with 80 larger “divisions.” On top of that, the province would be divided into 17 regions, with a total of 45 “regional” seats.

Voters would mark two ballots, one for a candidate in their division, as at present, and a second for a party, or an independent candidate. In each region, the new regional seats would be distributed in proportion to the votes on the second ballot, and in the case of seats for parties, filled from their candidate lists.

The government seemed to be setting up its proposal for failure.

Premier François Legault said he wouldn’t use his Coalition Avenir Québec majority in the National Assembly to pass the bill unless it also had the support of both Québec solidaire and the Parti Québécois. In effect, he gave each of those small parties a veto over the proposed legislation.

Even if the bill did get through the Assembly, it wouldn’t take effect until after it was approved in a referendum.

The referendum would be held at the same time as the next general election, due in 2022. So, the new system wouldn’t be used until the election after that.

This is to assure the CAQ caucus that they would at least have a chance at four more years as MNAs before any of their seats were eliminated.

But the odds would be against the proposal in a referendum anyway. Every time a Canadian province has held a referendum on changing its voting system, its voters have chosen to stick with the simple, flawed but familiar first-past-the-post.

And the Legault government, in presenting its proposal, made little real effort to sell it to public opinion.

It gave the impression that it was presenting it grudgingly, only so it could claim to have kept a campaign promise. But it wasn’t really honouring the pledge Legault signed before the last election to introduce the new system for the vote due in 2022.

Like other parties that promised while they were in the opposition to change the voting system, the CAQ apparently developed a new appreciation for the present one once it put them in power. In the general election a year ago, it gave Legault a majority of the seats in the Assembly with only 37 per cent of the vote.

Legault said he wouldn’t campaign for his government’s proposal in a referendum. And he said that changing the voting system has proven more “complicated” than he thought.

“Complicated” also describes the text of the proposed legislation, which is the only information the government offered to voters who want to know how the new system would affect their representation in the Assembly.

To determine how many total representatives each region would have requires two mathematical operations with a total of 13 steps. In the English version of the bill, the formula for distributing the new “regional” seats is more than 230 words long.

One thing, however, is apparent: The political influence of the minority voters concentrated in the Montreal area would be weakened.

That’s because there would be fewer MNAs elected directly by the constituents they represent. More than a third of them would be replaced by regional representatives, who would owe their election to their position on a party list. As if the parties and their leaders don’t have enough power already.

And that gives the minorities a reason to hope, apparently along with the government that proposed it, that the new voting system won’t be adopted.