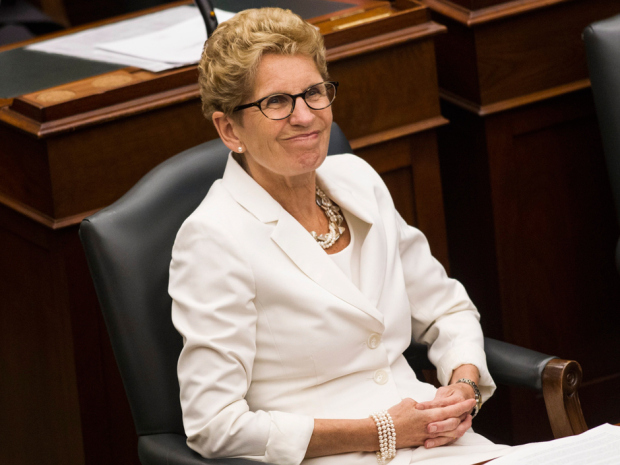 Kathleen Wynne wrote another letter to Stephen Harper this week, requesting a meeting. According to the Toronto Star version of the tale, the Ontario Premier “pleaded” with the Prime Minister to find time in his schedule for her.
Mr. Harper unfortunately wasn’t able to get back to her right away. He was busy chatting with the new mayor of Toronto, John Tory, who has been in office all of 10 days. He might not get around to it today, either, as he has an important session with the Premier of Newfoundland, who got his job in September.
Toronto city hall is a five-minute cab ride from Queen’s Park, seat of the Ontario legislature. If Ms. Wynne had known about the mayor’s slot in Mr. Harper’s schedule, maybe they could have shared a cab to the airport. Mr. Tory was looking for money for SmartTrack, the transit project that was at the core of his successful election campaign. Ms. Wynne is also looking for transit money. Two birds, one stone, as they say.
But Mr. Harper wasn’t buying. When he appeared in the Toronto suburb of Markham recently, Ms. Wynne wasn’t informed he was in town. Questioned at the time about her complaints, he delivered a lecture in which he suggested Ms. Wynne spend more time fixing Ontario’s struggling economy, and less time picking fights with him.
Ms. Wynne is skilled at the avoidance game. She regularly refused entreaties for meetings with Mr. Tory’s predecessor, former mayor Rob Ford, though she gets along with Mr. Tory like a house on fire. Dec. 5 marked a year since she last sat down with the Prime Minister. Mr. Harper has many reasons for being reluctant to renew the acquaintance, most of them the work of Ms. Wynne and her Liberal government. You can read about them here – there are so many they easily comprise a column on their own.
Since her last note to Mr. Harper – it took him two months to reply – she has doubled down on her determination to turn the relationship into a public feud. Her letter this week includes a list of projects for which she wants federal funding and areas in which she would appreciate special treatment. For instance, she thinks a subway project in Scarborough should be classed a matter of coast-to-coast interest and paid for from a fund set aside for national projects, not taken from the Ontario portion of the federal infrastructure kitty.
Yet even while making the letter public, stoking the impression of an Ottawa-versus-Ontario conflict, Ms. Wynne chides Mr. Harper that their relationship “should be one of collaboration, not confrontation.”
Mr. Harper’s aversion to meeting Ms. Wynne stems from his belief she used an earlier discussion to stir up a phoney conflict – she accused him of “smirking” at one of her ideas — to divert public attention from scandals afflicting her government. Her current missive, and the high profile she’s working to give it, comes as the Liberals are again confronted with evidence of dubious management and financial irresponsibility. This week Ontario auditor general Bonnie Lysyk warned that the provincial debt is growing at alarming proportions and will reach $325 billion by 2017-18, more than double what it was a decade ago when the Liberals began their ongoing spending binge. That’s the same year the Liberals say they will balance the budget, but Finance Minister Charles Sousa was recently forced to admit revenues are lower than expected, and the province can only hit this year’s deficit target by withdrawing money from an emergency fund.
Ms. Lysyk also revealed that the installation of smart meters across Ontario, intended to save money for consumers and reduce power usage, cost $1 billion more than expected and had no effect on consumption. Energy Minister Bob Chiarelli responded by hinting that Ms. Lysyk wasn’t smart enough to understand the electricity business, overlooking her decade of experience at Manitoba Hydro. Now he’s being accused of sexism. NDP leader Andrea Horwath called him an “ignorant man.”
No wonder, then, that Ms. Wynne discovered it was time for another letter to the Prime Minister. The billion dollars wasted on smart meters, added to the billion for cancelled power plants, the $468 million the Liberals spent to placate Ontario teachers just before the election, the $309 million to prop up the MaRS research scheme – for which they are reportedly ready to provide another $86 million loan – would more than cover Ms. Wynne’s spending needs without having to pester Mr. Harper.
But then she would have to find another excuse to divert attention from her record. Next door in Quebec, Premier Philippe Couillard has been making headway in his effort to cut costs and strengthen the economy. In the process he has suspended Quebec’s traditional practice of using manufactured confrontations to extract concessions from Ottawa. Ms.Wynne appears determined to fill the opening, making Ontario the disgruntled child of Confederation.

Kelly McParland: Pierre Trudeau’s disastrous record is finally laid out for all to see