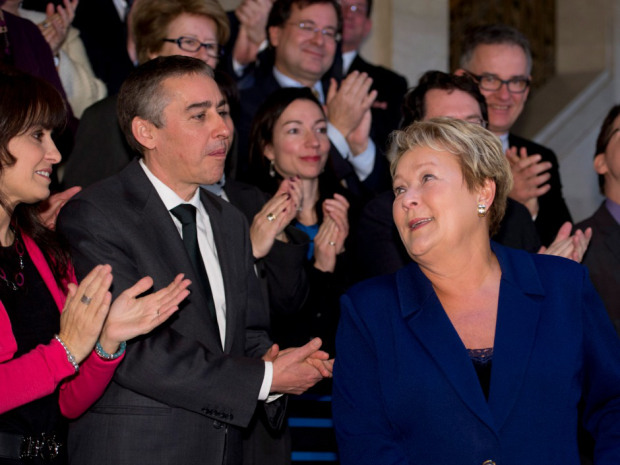 Having sown the political fields with an ugly campaign against ethnic garb and the English language, Quebec Premier Pauline Marois is now hoping to reap a bounty of votes in an April 7 provincial election. If she wins a majority, the province likely will hold a third sovereignty referendum. It’s been almost two decades since the last one, and separatist foot-dragging on the question of when they’ll get their “winning conditions” is beginning to take on a farcical Waiting-for-Godot aspect. If not now, when?
During the 1995 referendum campaign, the federalist forces held a downtown Montreal rally that drew an estimated 100,000 participants. But as Michael Den Tandt reported in Wednesday’s edition of the National Post, such scenes are unlikely to be repeated this time around. Quebec’s bloated welfare state and dysfunctional infrastructure programs suck in $16.3-billion more in federal money than the province gives back. Increasingly, Alberta is becoming Canada’s economic engine, as Quebec dawdles about developing its own energy resources and repels investors with its absurd language laws. To many Canadians, Quebec’s government looks less like a partner in confederation, and more like a bailout case.
Meanwhile, the Quebec government’s completely gratuitous attack on religious freedoms in the province finally has convinced many Canadians that the province’s society truly is distinct, albeit in the worst possible way. It goes without saying that not all Quebecers are xenophobes. But if they are willing to re-elect, in majority form, a government that builds its popularity at the expense of turbaned nine-year-old soccer players, hijabbed nurses, and yarmulke-wearing doctors, well that says something doesn’t it? We’re all federalists here, but the behaviour of Quebec’s government truly does strain the conceit that “Canadian values” hold interrupted sway from coast to coast.
So how should our federal government respond if a referendum is called by a re-elected Parti Québécois? Here are four suggestions:
First, don’t act as if Quebec separation would be some kind of apocalypse. Acting as if Quebec’s departure from Canada is unthinkable destroys our bargaining position on a hundred different issues once the referendum fails. Indeed, such hysteria is a major reason Quebec has built up that annual $16.3-billion bribe.
Second, notwithstanding the paragraph above, let’s not waste our breath lecturing Quebec about the economic fallout of separation. Like all sentimental nationalists, Quebec separatists see independence as a sort of magical elixir. Warning them about dollars and cents is like warning teenage poker players that all those cigars might eventually give them gum cancer.
Third, make NDP leader Thomas Mulcair — and every other soft federalist — tell us clearly whether he or she respects Canadian law. Specifically, the Clarity Act, which defines a valid referendum result as one based on “a clear expression of the will of the population,” expressed through “a clear majority” of voters — as opposed to the bare-bones majority standard of 50%-plus-one, which the NDP has supported since the Jack Layton era.
Fourth, and this is the big one: Have the courage to tell Quebec, flat out, that if Canada is divisible, so is Quebec. And whatever clear voting standard is used to adjudicate the overall result of the province’s referendum will be the same result used to adjudicate the status of the province’s northern Cree regions, the Eastern Townships, and, most importantly, Montreal.
There are several million people living in Quebec who oppose their provincial government’s separatist agenda
Which is to say: If 60% of Quebcers somehow can be convinced to vote for separation, while 60% of Montrealers vote to retain the status quo, then Ottawa should partition Montreal as part of sovereign Canada, free of Quebec’s parochial language laws, ethnic demagoguery and dead-end economic policies.
Partition wouldn’t be about Canada making any sort of land grab, even if that is how separatists would describe it. Partition would be about fulfilling our historical and constitutional obligations to Canadians — especially Anglophones and immigrants — who have grown up in this country expecting their government to respect basic rights (especially those pertaining to language and religion). Since Quebec’s separatists have shown that they have no intention of respecting these rights — indeed, that are willing to ostentatiously flout these rights as a means to appeal to the worst instincts of Québécois voters — the federal government must signal that it will act decisively when the votes are counted.
It is fine for jaded Canadians in Toronto and Calgary to say they’re tired of Quebec’s complaints, and that the province can just “go its own way” if it likes. But there are several million people living in Quebec who oppose their provincial government’s separatist agenda, and they may soon be looking to Ottawa for vindication of their rights. In the unlikely event that the separatists win a referendum, the voices of these Canadians must not be ignored.
National Post

Jonathan Kay: Canada's cultural elites have seen the enemy — and it is Canadians

Jonathan Kay: Canada's cultural elites have seen the enemy — and it is Canadians