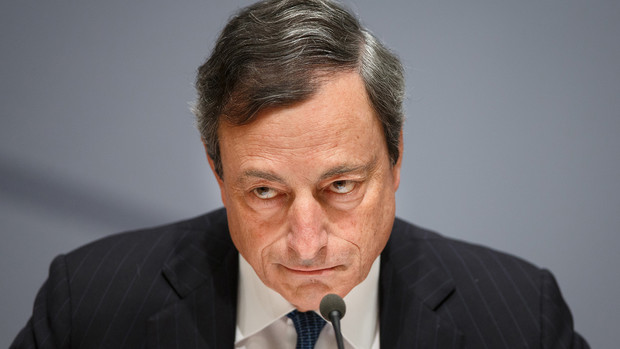 European Central Bank President Mario Draghi’s pledge to buy bonds from euro-region governments is allowing the independence movement in Catalonia to advance its cause without facing resistance from investors.

The yield on Catalonia’s 2020 bonds remained close to a record low as regional leaders prepare for a Nov. 9 referendum. Pro-referendum parties won 62 percent of the regional vote in European Parliament elections on May 25.

While Draghi took credit for salvaging the euro by creating a program to buy government debt in 2012, that commitment is also allowing politicians to sidestep the market discipline that might otherwise check their bolder ambitions. A Catalan secession would cost Spain 10 percent of its tax revenue and trigger a row over how to carve up the sovereign’s 836 billion euros ($1.1 trillion) of debt.

“Draghi’s magic words are softening the impact of the Catalan conflict,” said Antonio Roldan, a London-based analyst at Eurasia Group, which advises bond investors on political risk. “If the situation in Catalonia unravels and the threat of a messy rupture becomes apparent it would not be ECB’s role to intervene, so the correction could be aggressive.”

The vote planned by the Catalans would come less than two months after a referendum on Scotland leaving the U.K.

The increasingly acrimonious argument there also has involved the division of debt and whether the new independent state would have access to a lender of last resort and remain in the European Union without having to reapply for membership.

Independence could force the 7.6 million Catalans out of the EU and shut off Barcelona-based lenders such as CaixaBank SA from central bank funding, Bank of Spain Governor Luis Maria Linde said last year.

“At the moment, no economic indicators are reflecting the seriousness of the territorial problem,” Josep Duran i Lleida, leader of the Catalan nationalist Convergencia i Unio group in the Spanish parliament, said at a conference in Sitges, near Barcelona today. “If this is not resolved, there will be consequences for all sides.”

Families and companies in Catalonia paid 7.3 billion euros to the Spanish state in the first three months of the year, the second-biggest contribution after Madrid. That compares with a total of 70 billion euros collected by the central government in the period, data compiled by General Comptroller Office show.

As financial pressures recede, Catalan President Artur Mas is pushing through legislation that will allow him to call the vote in November, and is ready to order the delivery of about 6,000 ballot boxes, La Vanguardia reported May 23.

Should Spain’s Constitutional Court opt to block the vote, Mas has the further possibility of dissolving the Catalan assembly and holding regional election as a de facto referendum.

The Scottish referendum on Sept. 18 by contrast is being held with U.K. Prime Minister David Cameron’s consent. Spanish premier Mariano Rajoy, for his part, has the right to suspend the Catalan government’s powers under extreme circumstances.

“The consequences are so damaging for both sides that investors rationalize the issue and say that won’t happen,” said Ignacio de la Torre, a Madrid-based analyst at Arcano Group, which caters to international investors interested on Spanish equities and fixed income. “The support from Draghi to asset prices has put any risk well below the investor radar.”

A secession of Catalonia would also raise questions over rescue loans funded with central-government debt. Catalonia borrowed 31.6 billion euros of loans from the facilities, according to Catalan government presentation.

While the money allowed Catalonia to pay suppliers, doctors and teachers, and stay away from the bond markets since 2011, the country’s debt is increasing, and could reach 101.7 percent of the economy next year, based on government estimates.

The Spanish Social Security also paid 4.3 billion euros in pensions and other subsidies to Catalans between January and March compared with 1.4 billion euros of contributions it received from the region, government data show.

Even so, the three pro-independence referendum parties saw their support increase by eight percentage points in the European Parliamentary elections compared with the results of the 2012 election for the regional assembly, according to the Catalan government’s website.

Esquerra Republicana de Catalunya, the party pushing hardest for independence, won the most votes in the region with a 24 percent support, beating its senior partner in the governing coalition, Mas’s CiU, by 1.8 percentage points.

Any investors considering betting against Catalan or Spanish debt will probably be deterred by the outlook for next week’s ECB governing council meeting 700 miles north in Frankfurt, according to Ivan Comerma, chief investment officer at Morabanc Grup SA, which manages 6.5 billion euros.

At the June 5 meeting, Draghi will decide what to do about the euro area’s sluggish inflation, after saying last month he’s “comfortable” with easing policy.

The prospect of “quantitative easing is so powerful that no investor would like to get caught shorting Spanish bonds on concerns about any potential risk from tensions with Catalonia,” said Comerma, who isn’t adding Spanish or Catalan bonds due to low yields. “If there wasn’t the Draghi effect investors would be already more focused on this risk, so he will face a dilemma if things unravel.”