Churchill Falls and the quality of Quebec’s mercy 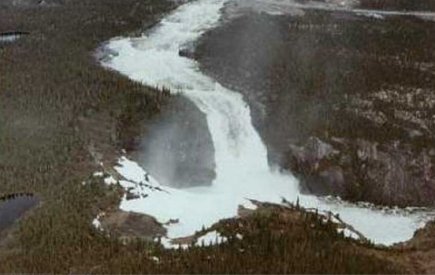 Quebec Premier Pauline Marois has agreed to meet her Newfoundland counterpart Kathy Dunderdale this fall to discuss energy issues. Do not expect Ms. Marois to heed Portia’s advice.
None of her predecessors as premier listened to Shakespeare’s heroine, either, when she counselled that:
“The quality of mercy is not strained
It droppeth as the gentle rain from heaven
Upon the place beneath; it is twice blest
It blesseth him that gives and him that takes,
‘Tis mightiest in the mightiest, it
Becomes the throned monarch better than his crown.”
Hydro-Québec, the government-owned utility, has a contract to buy power from Newfoundland at a fixed price until 2016, and then a lower price still for 25 years thereafter. Like Shylock and his “bond” in The Merchant of Venice, Hydro-Québec insists that the contract be respected to the letter – even though the terms have become the equivalent of the “unequal treaties” that colonial powers once imposed on lesser peoples.
Portia found a legal loophole to stymie Shylock – a pound of flesh for non-compliance but not a hair more or less, an impossibility that made the lender relent. But nothing has been found to rescue Newfoundland from its contractual bondage, despite two legal appeals. And since the government of Quebec reaps up to several billion dollars in profits from the contract each year, no Quebec government has ever believed in the “quality of mercy.”
The Montreal Economic Institute, a free-market think tank, estimated a few years ago that if Hydro-Québec had to pay market rates for the power it imports from Newfoundland at $2.50 per kilowatt hour, the corporation’s profit would shrink an astounding 75 per cent. Worse still for Newfoundland, the price Hydro-Québec pays drops to $2 per kilowatt hour from 2016 to 2041, when the contract is up.
It is true that when, after years of negotiation, the agreement was reached between Hydro-Québec and the Newfoundland entities that formed the majority partner in the Churchill Falls development, Newfoundland premier Joey Smallwood wrote in his diary, “Praise be to God.” Without Hydro-Québec as a buyer and guarantor for loans to complete the project, Churchill Falls might never have been built.
No one knew at the time – 1966 – that the price for power would explode so that Hydro-Québec could buy at $2.50 per kilowatt hour (soon to be $2) and sell at hugely more. Not only does Hydro-Québec make a killing on every kilowatt it buys and resells, it gets about 30 million of the 34 million kilowatt hours Churchill Falls produces.
Churchill Falls was Mr. Smallwood’s dream from the day he set eyes on the massive water. He believed its exploitation would be a stepping stone toward prosperity for a economically poor corner of North America. Instead, it turned out to be a blasted dream with a bitter memory of what might have been if, say, an escalator clause had been included so that the price Newfoundland received rose with the eventual Hydro-Québec selling price.
That kind of arrangement would be fair today if Quebec were willing to be flexible or display that “quality of mercy.” It is ironic for a province, Quebec, whose self-narrative as taught in schools, recited in folklore and echoed in political speechifying is one of being abandoned and then put upon by others, to be the province putting upon another, without a glimmer of self-doubt as to the equity or morality of its position. Yes, Quebec has the law on its side, and the bond of a “contract” freely entered into (unlike the “unequal treaties”) at a time when the world looked very different than it did not too long after the contract was signed.
In Quebec, scarcely anyone gives a hoot about the contract, and only scattered voices have echoed Portia’s plea. In Newfoundland, it is seen that the law has prevailed but that justice has not been done.
There is no chance whatsoever this fall that Ms. Marois will reopen the Churchill Falls file, which has etched itself as deeply into the discourse and memory of Newfoundlanders as the hanging of Louis Riel and the Manitoba Schools Question once did for French-speaking Quebeckers.