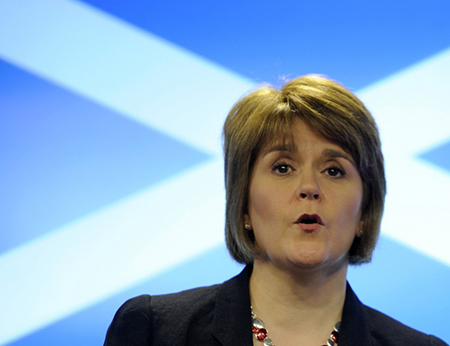 SCOTS could be asked to vote in another, quick-fire referendum on independence if new powers promised to Scotland are not delivered, Nicola Sturgeon warned yesterday at the launch of her bid to become SNP leader and First Minister.
At an event in Glasgow, Ms Sturgeon said she would play a frontline role in ensuring pre-referendum pledges from the three pro-Union party leaders of “home rule and something close to federalism” ­became a ­reality.
The Deputy First Minister, who is expected to remain the sole candidate for the party leadership, said her immediate focus will be on “playing an ­active role” in the Smith Commission, which has been established to hammer out a deal between Scotland’s political parties on more devolution by the end of November.
The 44-year-old, who has been Mr Salmond’s deputy for the past decade, is expected to become the first woman to hold the office of First Minister of Scotland. She said her guiding ethos would be a “social democratic one” with a pledge to foster a vibrant business community and “recharge” efforts to tackle inequality and poverty.
But the prospect of another referendum prompted concerns from other parties who say the SNP must “move on”.
Transport minister Keith Brown is expected to announce his candidacy for the deputy leadership – Ms Sturgeon’s current role – in Edinburgh this morning, as is the MP Stewart Hosie, the SNP’s Treasury spokesman at Westminster.
The SNP leadership, including Mr Salmond and Ms Sturgeon, have both previously suggested that referendums only happen “once in a generation”.
Yesterday Ms Sturgeon said: “If I’m elected to be leader of the party, my focus will not be planning for another referendum, my focus will be working with others to deliver the substantial powers that were promised to the people of Scotland in the closing stages of the ­referendum.”
These must be capable of “making a real difference” to people’s lives, including powers to create jobs, ensure proper fiscal accountability, protect public services and deliver “fair” social security. “It must be a package that maximises devolution in substance, not just in rhetoric,” she warned.
However, the prospect of another vote on the constitution will be determined by the “circumstances of the day”, she added. If the UK parties “renege” on their promise of substantial new powers for Holyrood or a future European referendum sees Scotland taken out the EU “against its will”, this could mean another vote on the ­constitution.
“You may have circumstances in which the people of Scotland will be demanding the right to choose a different future for Scotland,” she said.
Labour, the Conservatives and the Liberal Democrats have published separate plans for more powers for Holyrood and pledged that a deal will be reached by the end of November, after a timetable was set out by former prime minister Gordon Brown before the ­referendum.
The UK parties could ensure the prospect of another referendum is thwarted by delivering in full on their promises of more powers, observers said.
“My focus right now is on ­respecting the outcome of the referendum and moving forward to ensure the implementation of what I think is the will of the people in that respect,” Ms Sturgeon added.
“If those promises are not delivered, I think the UK parties will encounter a very angry reaction indeed from the public.”
She declined to say if the commitment to another independence referendum would be in the party’s manifesto for the 2016 election which the party hopes to “win and win well”.
The Deputy First Minister said it would be dictated by circumstances and “the mood of the public” and added: “We will only have another referendum if a party is elected on a platform of offering – in a manifesto – a referendum. It will be driven by what the people of Scotland want.”
Polls at the weekend suggested the party is set for another victory at Holyrood in 2016 and could even seize another ­majority. SNP membership has more than doubled since the referendum defeat to top 60,000. More than 35,000 people have joined up since last Thursday.
Scottish Conservative deputy leader Jackson Carlaw said: “This confirms that a vote for the SNP in 2016 is a vote for another independence referendum – that is not what the majority in Scotland want. People have moved on; the SNP must too.”
Liberal Democrat leader Willie Rennie said the SNP’s plans were changing “hour by hour”.
He said: “The referendum vote demonstrated the will of the Scottish people to build a stronger Scotland and it will be for all political parties to match those expectations.”
Labour’s Drew Smith urged Ms Sturgeon to “learn the lessons” of the referendum.
He added: “That must mean being prepared to accept that Scotland remaining within the United Kingdom is the settled will of the Scottish people.”