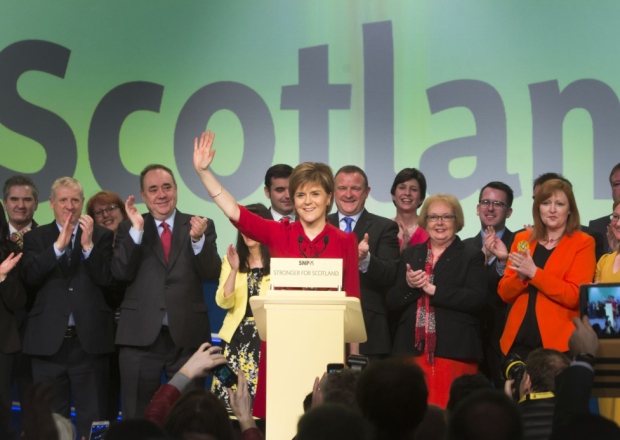 NICOLA Sturgeon has refused to rule out the prospect of another Scottish independence referendum before 2020.
The First Minister said yesterday she has still to decide whether to include a commitment to another vote on the constitution in the party’s manifesto for next year’s Holyrood elections.
But she insisted that independence will not be part of the forthcoming General Election campaign.
“I think we will have another referendum and I think Scotland will become independent,” Ms Sturgeon said.
“But that’s only going to happen when we have a party, presumably the SNP, which puts another referendum in their manifesto for a Scottish Parliament election and the people vote for that.
“I can’t impose a referendum on the Scottish people against their will.
“Will it be in our 2016 manifesto? I will take that decision when we come to write our 2016 manifesto. At the moment I’m concentrating on the 2015 one.”
Recent polls have suggested that the Yes side would win a second vote as support for the SNP and Yes parties surged after the referendum.
But Nationalist leaders, including Ms Sturgeon and Alex Salmond, had suggested that a referendum would be a “once in a generation” event.
Ms Sturgeon also said yesterday that the SNP government could still prop up a Labour minority government on a vote-by- vote basis – even if the Trident nuclear weapons system is renewed by Ed Miliband’s administration.
But she described Trident as a “red line” issue for the SNP, which would rule out a more formal deal like a coalition or “confidence and supply” arrangement with a Labour government.
However, Ms Sturgeon indicated this may not mean voting down a Labour budget, because Westminster “budgets don’t deal with spending, they deal with tax increases”.
Asked if the SNP would bring down a Labour administration over Trident, she added: “You can defeat governments in a minority context; it doesn’t necessarily mean that government falls.”
The First Minister added: “If we were voting on a vote-by- vote basis, we would vote for things we agree with and we wouldn’t vote for things we don’t agree with.
“But under no circumstances would we ever vote for the renewal of Trident or the spending of money on the renewal of Trident.
“The £100 billion that’s going to cost over the next 35 years is better spent on health education and keeping people out of poverty.”
But the First Minister said a working relationship with Labour would be possible.
“I’m sure there are many issues we could work together on,” Ms Sturgeon said.
“We know from past experience that Labour oppositions promise big and then they get into government and they don’t deliver.
“If we want to make sure that Labour firstly delivers on the things that it’s promising to do and we agree with, we need to make sure there are SNP MPs in there holding them to account and making sure that they deliver.”
But it came as David Cameron warned that Labour will not recover in Scotland unless the party rules out any deal with the SNP.
The Prime Minister said that the Tories are the only party recovering north of the Border because they have said they will not deal with the Nationalists.
However, he said he worries that Labour leader Ed Miliband is “not strong enough” to stand up to former SNP leader Mr Salmond and his successor Ms Sturgeon, and their “transitional demands”.
Earlier this month, Mr Miliband ruled out a formal coalition with the SNP following a Tory campaign warning that he was planning to form a government after the election with the help of the party, but he failed to rule out an informal agreement.
Mr Cameron said: “Labour ought to rule out not just coalition but any form of deal with the SNP. They can’t recover in Scotland unless they actually say, ‘We’re not going to deal with these people’.
“While they are saying effectively they’re going to deal with them, that’s giving people in Scotland a green light to vote SNP. They’ve got to have the courage of their convictions.
“The only party that’s actually recovering a little in Scotland is the Conservatives, because we’ve said, ‘We’re not dealing with these people, they want to break up our country, we’re not having anything to do with them. Vote for what you believe in’.
“What is Labour’s message? ‘We don’t like the SNP but we might do a deal with them – they might help us over the threshold’. That’s useless.”
He said the SNP was “just trying to take the Labour Party hostage”.
Polls continue to suggest the SNP is poised to win dozens of Scotland’s 59 seats and could even hold the balance of power at Westminster in the event of a hung parliament.