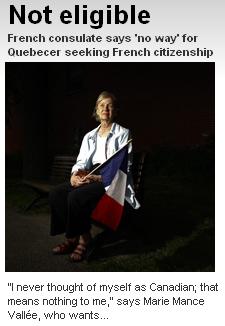 Vallée, whose ancestors came to Quebec in the 1650s, said she plans to fight the ruling in hopes of becoming a French citizen.
The email also said anyone whose ancestors came from France after the 1763 signing of the Treaty of Paris, in which Quebec was ceded to the British, could under certain circumstances regain their citizenship.