Legault gets ahead of himself on the notwithstanding clause 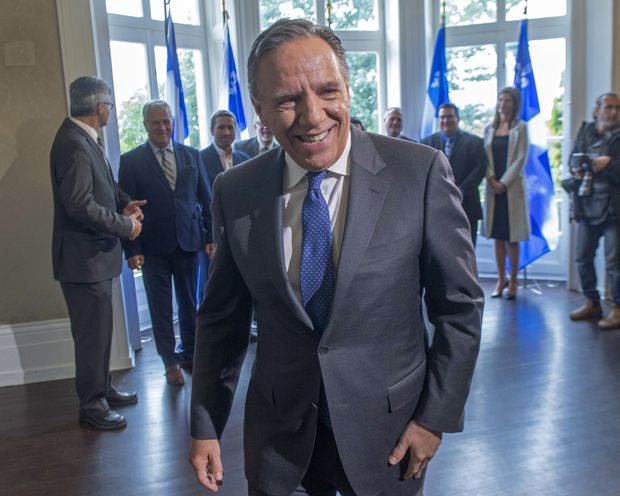 In France, where Quebec politics get more attention than anywhere outside Canada, Le Monde spoke of a “crushing victory by the right.” At the more downmarket Le Parisien, the verdict was even more sensational: Quebec Elects a Nationalist and Anti-immigration Government.

The beleaguered Marine Le Pen, leader of France’s truly anti-immigration Rassemblement national, could hardly believe her luck. She tweeted that Quebeckers had “voted for less immigration,” demonstrating “lucidity and firmness in the face of the migration challenge.”

That is hardly the message premier-designate François Legault hoped his victory would send to the four corners of the globe. But Mr. Legault is learning the hard way that what he says now carries repercussions far beyond the tiny bubble of Quebec politics and can influence his province’s reputation not just in the rest of Canada, but around the world.

For a seasoned politician, Mr. Legault was shockingly undisciplined on the campaign trail. His daily press conferences could go on ad infinitum and Mr. Legault would venture answers to reporters’ questions that a more scripted politician would not touch with a 10-foot pole. It got him into plenty of trouble and, were it not for Quebeckers’ overwhelming desire to punish the Liberals and Parti Québécois alike, it might have cost him the election.

So, it is mind-boggling why Mr. Legault chose to waste his first postvictory news conference on Tuesday by answering a double-hypothetical question about what he would do if courts strike down a law that his government is in no hurry to pass. He should have known that nothing productive could come of his outburst, which left exactly the opposite impression that he intended to make.

While the official program of the Coalition Avenir Québec that Mr. Legault leads favours prohibiting persons in a position of authority from wearing conspicuous religious symbols, passing legislation giving effect to this policy is not high on Mr. Legault’s agenda.

Yet, on Tuesday, the premier-designate was already musing about invoking the notwithstanding clause to override a non-existent court decision that nullifies the currently non-existent legislation, whose shape and form remains a matter of pure conjecture.

This is not to say some form of legislation regulating religious symbols in the public sphere won’t eventually show up on the order paper of a CAQ government. The issue of religious accommodation has dogged successive Quebec governments for more than a decade, as rising Muslim immigration has forced the province to grapple with questions of religious diversity.

Francophone Quebeckers’ idea of state secularism may not correspond with the dictionary definition of the concept, given their desire to grandfather the blatantly Catholic symbols of their past, right up to the crucifix that hangs in the National Assembly. But that doesn’t mean the new CAQ government will be able to indefinitely ignore demands to regulate other religious symbols.

There is a large consensus among Quebec’s political class that the best way to settle the debate once and for all is to follow the recommendations of the 2008 Bouchard-Taylor commission on religious accommodation. The commission, led by sociologist Gérard Bouchard and philosopher Charles Taylor, concluded that “agents of the state” (such as judges, Crown prosecutors and police officers) should be prohibited from wearing religious symbols.

In 2017, Prof. Taylor dropped his support for the proposal, saying that it had been misunderstood. Indeed, the Bouchard-Taylor report explicitly excluded teachers, civil servants and health-care professionals from the list of public employees it said should be prohibited from wearing religious symbols. But that detail seemed to have been lost on many politicians.

The official CAQ policy would include teachers among those banned from wearing the Muslim hijab or Jewish kippa. But whether a CAQ government would legislate to include teachers in the mix remains highly speculative. What’s more, any legislation regulating when and where police officers or judges could or could not wear religious symbols would likely be limited in scope.

On Wednesday, the CAQ MNA who served as the party’s justice critic in opposition moved to clean up the damage Mr. Legault created on Tuesday. Simon Jolin-Barrette insisted that the new government intends to ensure that any future legislation on religious accommodation would stand up in the courts. He added that invoking the notwithstanding clause, while an option, would never be the CAQ’s first course of action.