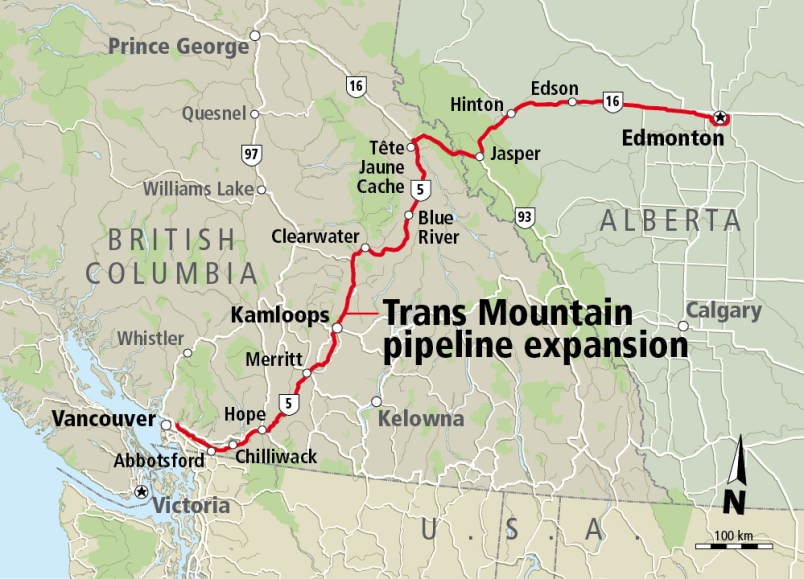 The Federal Court of Appeal has spoken clearly for the southern resident killer whales of the Salish Sea, for the First Nations that live along the Pacific Coast and for the environmental activists who run the cities of Vancouver and Burnaby.

The court’s decision to quash the federal cabinet’s construction permits for the Trans Mountain pipeline will be hailed by professional objectors everywhere.

Justice Eleanor Dawson, who wrote the decision, and her colleagues, justices Yves de Montigny and Judith Woods, can take comfort from the fact that their jurisdiction did not extend to considering the thousands of jobs across the country that have been imperilled by the decision — not to mention the deleterious impact it will have on national unity.

But the net effect is that Canada’s attempts to realize a world price for its resource bounty has again been thwarted, even under this ultra-progressive prime minister and a government that has modernized the National Energy Board, overhauled the environmental assessment process and introduced a “world-leading” marine safety system.

The decision slaps a large sign on Canada’s resource industry that reads Closed for Business. Potentially, it will cost thousands of jobs and billions in revenue.

No wonder the shareholders of Kinder Morgan voted 99 per cent in favour of the $4.5-billion sale of a pipeline that now has no permits, just minutes after the court’s decision was made public.

Statistics Canada revealed this week that there has been net divestment of $8.6 billion from the energy and mining sector over the past five quarters. This decision is unlikely to help turn that number around.

Perhaps the only saving grace is that the project is on life support, rather than stone cold dead, as it probably would be were it still owned by Kinder Morgan.

With the relevant order-in-council quashed by the court, construction and operation of the pipeline is on hold, until new approvals are issued. For that to happen, the government has to send the project back to the National Energy Board for review and engage in a new phase of consultation with First Nations affected by the project. The “phase three” consultations took nine months in 2016 but were deemed inadequate by the court, in essence because officials only listened (rather than engage in dialogue) and the government had already made up its mind. In effect, the Liberals didn’t follow their own rules on consultation — an epic fail for the government of reconciliation.

“Canada’s efforts fell well short of the mark set by the Supreme Court of Canada. Canada failed in phase three to engage, dialogue meaningfully and grapple with the real concerns of the Indigenous applicants so as to explore possible accommodation of those concerns. The duty to consult was not adequately discharged,” wrote Dawson.

The ruling also found flaws in the National Energy Board’s report to cabinet. The NEB review did not include tanker traffic related to the project, even though it had concluded that the increased number of ships needed to service the pipeline would have significant adverse effects on the southern resident killer whales in the area. However, the recommendation it handed to cabinet said the pipeline would not have significant environmental effects. The court said the board was only able to reach this conclusion by ignoring the impact on the marine environment (the board took the view that marine shipping was beyond its regulatory authority). If the board is now required to take into account its adverse finding, it is hard to see how it can reach the same conclusion on the benign environmental impact of the pipeline.

The fact that the government had committed to an action plan for the southern resident killer whales and announced a $1.5 billion Oceans Protection Plan was considered by Dawson but dismissed as “inchoate initiatives.”

“While laudable and to be encouraged, they are by themselves insufficient to overcome the material deficiencies in the board’s report,” she wrote.

The Trudeau Liberals might call the logic of that argument “inchoate,” but it has left their “clean environment, strong economy” strategy in tatters. The idea of a grand bargain to build a pipeline and impose a carbon tax was already under pressure with the election of provincial governments ardent in their opposition to the new tax.

But they were not expecting to encounter a major court delay to throw sand in the gears.

The decision can be appealed to the Supreme Court. But pipeline construction officially began last weekend and now those workers are off the job. It’s clear that the scheduled service date will have to be put back from December 2020. Dawson suggested the end result of her decision may be a “short delay.”

It’s difficult to share her optimism, even if some Liberals are pinning their hopes on what they called a “prescriptive” decision that was greeted with stunned silence in government circles — the expectation had been for a clean bill of health.

Yet, some confidence remains that by sending Natural Resources Minister Amarjeet Sohi to consult with the six affected First Nations communities, and by apprising the NEB of what’s been achieved recently under the Oceans Protection Plan, the project could be back before cabinet in a matter of months. That seems a very rosy assessment of what is likely to happen.

For Justin Trudeau, it is a political disaster. He has staked his personal credibility (not to mention the better part of $15 billion of taxpayers’ money) on getting this pipeline built.

His erstwhile friends in the environmental movement, such as Vancouver city Councillor Andrea Reimer, praised the court for “protecting the public interest.” Greenpeace is rejoicing in what it called a “huge victory for Indigenous people.”

Meanwhile, Andrew Scheer and the Conservatives are lamenting a “total mess” and Trudeau’s “utter failure to champion the cleanest, most ethical, environmentally friendly energy in the world.”

There is a grim irony that this most zealous of prime ministers must now be wondering who will deliver him from turbulent environmentalists, Indigenous protesters and activist judges.

Canada has become not so much a country, as a stalemate. He didn’t create the problem, but he did say he’d solve it.

On Trans Mountain, Trudeau must do or do not. There is no try