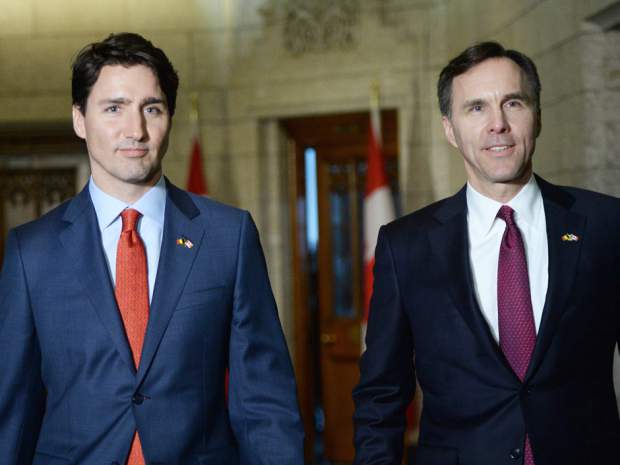 Justin Trudeau has told his senior lieutenants to draw up plans to make the Energy East pipeline and the Trans Mountain expansion in British Columbia a reality.
The prime minister has been convinced by his finance minister, Bill Morneau, and other influential voices around the cabinet table that the pipelines have to be built to achieve the ambitious economic growth targets his government has set.
But the problem for the Liberals is that this conviction has to be conveyed subtly to a public that has decidedly mixed views on oilsands expansion and pipelines.
The prime minister has never been an advocate of a Canadian future without oil. He supported the Keystone XL pipeline, and explicitly stated that no country that found 170 billion barrels of oil would leave it in the ground.
But people with knowledge of the matter suggest he has recently issued instructions that a pipeline strategy has to be top priority.
The government will make the ultimate decision on whether to approve the proposals, starting with Kinder Morgan’s Trans Mountain application, on which cabinet is expected to rule by Christmas.
Opposition to pipelines is greatest in B.C., where a December 2014 Angus Reid Institute poll suggested only 46 per cent supported the Trans Mountain expansion, and in Quebec, where only one in two Quebecers back Energy East. But there is broad support in the oil-producing provinces and Atlantic Canada, where the Liberals hold every seat.
With a provincial election due in May 2017, the Liberals are conscious that Christy Clark’s B.C. Liberals will need to be wooed. Her government opposes the Kinder Morgan expansion but Ottawa could engineer a deal that meets a number of the five requirements Clark suggested need to be fulfilled to win her approval — benefits for First Nations, a “fair share” of the economic spoils for B.C., and a world-leading marine oil-spill response system.
The Quebec government of Philippe Couillard may be easier to persuade, since the premier wants the federal government to invest $1 billion in Bombardier, the jewel in the province’s aerospace crown.
The Trudeau government has introduced new regulations for pipelines that include a climate change test and greater consideration of indigenous rights.
But government sources suggest the environmental case for these two pipelines can be made by pointing out that any increase in production in western Canada will be offset by declines in production overseas. In 2015, Saudi Arabia, which has no oversight on the environmental impact of its production, accounted for 10 per cent of Canada’s oil imports. An Ontario Energy Board study into Energy East suggested the maximum increase in greenhouse gas levels would be 1.6 per cent from current levels.


By cooling the rhetoric, resetting the regulatory process and privately courting moderate opponents, Trudeau’s approach has yielded more progress than the Harper government’s determination to bulldoze all opposition.

A broader public concern than greenhouse gas increases is safety, and the belief is that the public can be persuaded transporting oil by pipeline is preferable, and safer, than shipping by rail. A Leger poll in March suggested Quebecers prefer pipelines over other delivery options.
The Liberals are aware that Trudeau will have to perform a delicate balancing act on the file — he has established credibility on the environment and polls suggest he is trusted to make the right decision by a majority of Canadians (unlike his predecessor). He has made much of openness, evidence-based policy and acting as a referee, not a cheerleader, on the pipeline process.
At the same time, he is said to have become convinced that Canada’s future prosperity requires securing a world price for its crude.
The first test of the new policy will be Kinder Morgan. The National Energy Board has completed its review and its final decision is pending, before the file is passed on to cabinet. NEB hearings into Energy East have not yet started.
The government has promised a complete overhaul of the NEB to “restore confidence” in its review process.
As important will be the impact on public opinion of non-governmental organizations like Environmental Defence, which applauded the inclusion of a climate test that assesses projects against Canada’s commitment to keep the change in global temperatures below 1.5 C.
Adam Scott, a program manager at Environmental Defence, said the federal policy stipulates the government look at what can be controlled in its own jurisdiction, negating the argument about any emissions increases being offset by cuts abroad.
He also dismissed the idea that oilsands crude would find its way to the east coast by rail were the pipeline not built.
“It’s not economical and there isn’t the physical capacity to shift the oil that distance,” he said.
By cooling the rhetoric, resetting the regulatory process and privately courting moderate opponents, Trudeau’s approach has yielded more progress than the Harper government’s determination to bulldoze all opposition.
The dilemma now being posed internally is how best the federal government should use its influence to hasten the process still further.