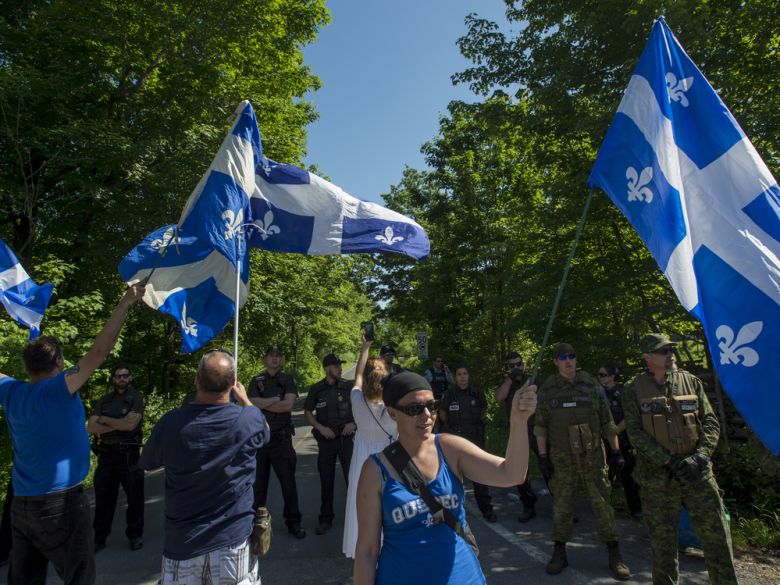 Quebec is completing a full election cycle, as the Parti Québécois, which in its time under René Lévesque, Jacques Parizeau and Lucien Bouchard, shook the country and gained international attention, is in its death throes. Quebec had Liberal and Conservative provincial parties from 1867 to 1935. The Conservatives governed for 24 of the first 30 years, largely because of the prestige of John A. Macdonald, even after the execution of Louis Riel, and the early days of Wilfrid Laurier. But after Macdonald died, the Quebec Liberals, espousing Laurier and complaining about military conscription in 1917, were constantly in government in Quebec from 1897 to 1936. In that year, Maurice Duplessis, who had led the provincial Conservatives since 1931 and had formed the Union Nationale by uniting his party with some dissident reform Liberals, was elected to the first of a still unmatched five full terms as premier of Quebec.

His tactic was to get the conservatives and the nationalists to vote together, a delicate operation because too much nationalism would frighten the conservatives and too much conservatism would disgust the nationalists. But it was the only method to defeat the Liberals, the fixed point in Quebec politics, because the Liberals successfully represented themselves in Quebec as the only party that could make Canada work for Quebec, and outside Quebec as the only party that could keep Quebec happily in Canada. There was some truth to this, as the Conservatives never had a federal leader who knew anything about Quebec between Macdonald and Brian Mulroney.

Duplessis’ formula was to revile the provincial Liberals as puppets of Ottawa and to get all that Quebec might aspire to within the Constitution (British North America Act), while assuring the conservatives of retention of traditional values, peace and order, rising prosperity, and the official discouragement of radicalism, atheism and excessive secularization. The Roman Catholic Church was greatly venerated as it had provided practically all the education and health care that had enabled the French fact to survive in Quebec for more than 150 years after the British defeat of France in 1759 at Quebec. Duplessis played upon the susceptibility of the bishops while dispensing them money that was very efficiently applied to schools, universities and hospitals. The clerical personnel in the schools and hospitals were much less well-paid and avaricious than their secular counterparts in other jurisdictions, enabling Duplessis through the Forties and Fifties to lower taxes, balance the budget and devote almost all of the province’s revenue to infrastructure; roads, 3,000 schools, the autoroutes, rural electrification, and all the universities in the province except McGill (and he was generous to McGill and other English institutions).

By every conceivable indicator, it was the only time until the McGuinty-Wynne economic miracle of impoverishment in Ontario (2003-2018), when Quebec was gaining on Ontario. The fabrication of the leftist media that it was a time of darkness in Quebec, la Grande Noirceur, was a mighty confidence trick that would not fly while Duplessis was there to rebut it. Somewhat more truthful, though a bit of a stretch, was his claim that “A vote for the Liberals is a vote for the oil lamp, the gravel road, and abject submission to Ottawa.” It was a priest-ridden society but an increasingly prosperous and educated one. Quebec led Canada in daycare and statutory workers’ rights (enabling Duplessis’ high-handed treatment of labour unions). He won the majority of the votes of French-speaking Quebecers in an astounding seven consecutive elections (1935-1956). The vulnerabilities of his system were that it required a political magician to operate it, and secularization became irresistible. Paul Sauvé was there to succeed Duplessis and Daniel Johnson to succeed Sauvé, but all three died in office, Sauvé and Johnson in their early fifties, and the balancing act came down from the high-wire. (Cardinal Paul-Émile Léger told me in 1971 that Duplessis had once said to him, in respect of the Church: “If you squeeze a fish hard enough, it will get away;” and that he had replied: “We’re not squeezing it, you are.”)

After Johnson died in 1968, the nationalist torch, which had been held by conservatives, passed from the right to the left and Lévesque, who founded his Parti Québécois in 1967 on the promise of sovereignty-association. This was the eat-your-cake-while-retaining-it theory that Quebec could secede from Canada but continue to receive the benefits of federalism. Lévesque reassembled a coalition of nationalists and some traditional Liberals. Historically, at the provincial level, Quebec was divided into five approximately equal groups: the Conservatives (bleus), Liberals (rouges), the nationalists, the non-French, and a floating vote. The Liberals had usually had the second and fourth blocs and enough of the rest to win. But Duplessis took the first and third blocs, and at least half of the last and most of the rural English (Gaspé, Pontiac, and part of the Eastern Townships). Lévesque, Parizeau and Bouchard took the second bloc, and large parts of the second and last groups. From 1976 to 2014, they held office for 20 years, less successful than the Union Nationale and with less capable leaders and a more fragile formula, but still a significant achievement.

But they are finished, redundant, like the Union Nationale after Lévesque stole the nationalist vote. The Parti Québécois has just published a vapid “Declaration of Principles.” The nationalists now are separatists and probably have about 30 per cent of the vote, and most of it is with Québec solidaire, which doesn’t want to be bothered with any pusillanimous havering about “association.” The Quebec Liberal party is now down to barely half of the old rouge-Liberal francophones while retaining almost all the non-French and so is now a mainly cultural minority party. And the new alternative to the Liberals and successor to the Union Nationale and Parti Québécois, the CAQ, for Coalition Avenir Québec (coalition for Quebec’s future), has almost all the conservatives, nearly half the traditional Liberals, and a few floaters, and is solidly in office under François Legault. It is likely that Solidaire will absorb the PQ, and the Liberals and CAQ will have to govern together or merge outright to form a non-separatist government. As has been demonstrated, a separatist election victory does not imply a separatist victory in a referendum. And after Jean Chrétien panicked in the 1995 referendum and almost lost it, his Clarity Act requires a clear referendum question (as the Scottish had in 2015), and a substantial majority, for Ottawa to feel under any obligation to negotiate Quebec’s independence seriously.

The significance of this new rotation of Quebec parties is that the new party is a rather economically conservative party, less socialist than Quebec was for over 50 years when “fairness” and “social democracy” were invoked as a cover for soaking the English (including many members of Montreal’s long-established Jewish community) to redistribute wealth and vacate upscale homes and offices to the neo-separatist Franco-Quebec elites, while hundreds of thousands of comparatively well-to-do Quebecers checked out of the province.

This is a subtle confirmation of the colourless but effective Canadian technique of gradual evolution through endless good faith compromise within acceptable parameters. The percentage of French Quebecers seriously tempted by independence appears to have moved from 50 per cent in the 1980 referendum to 60 per cent in 1995, to less than 40 per cent now. The non-French 20 per cent, which now includes a good many Haitian, North African and Lebanese newcomers to replace the departed English and make good the collapsed post-Catholic birthrate, remains staunchly federalist. The separatist crisis is passing, quietly.

This is worth remembering as President Trump relentlessly assaults the post-Reagan bipartisan “OBushinton” elite that he and his followers believe (correctly) misgoverned the country for 20 years, and as the United Kingdom wallows in the greatest shambles of British parliamentary government since the English Civil War 370 years ago (that culminated in the decapitation of the king). As Jim Flaherty said of his last budget, “Boring is good,” at least sometimes.