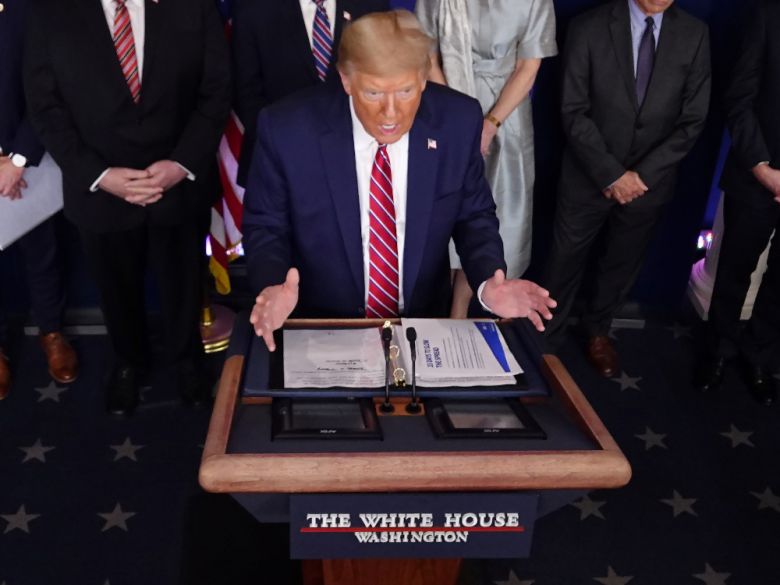 The coronavirus crisis is complicated by the unusual state of panic that has possessed much of the world, and by the somewhat divergent concerns and goals of those addressing the medical questions and those trying to cope with the economic damage. The national American political media, in their hostility to the president in an election year, and before the proportions of the pandemic were clear, fanned the fires of public hysteria. At the same time, the Chinese government and media (the second is a branch of the first) first dissembled and lied about the virus and are now engaged in an immense work of fabricated myth-making. For two or three weeks, the spread of the virus in China appeared to be completely uncontainable and the U.S. administration was trying to damp down concern in a manner that seemed somewhat cavalier.

The American picture has clarified sharply, with a committee of scientific and public health administration experts developing policy under the chairmanship of the vice-president and the sponsorship of the president. It is now clear that partisanship is completely out of fashion and that the country demands unity and action to deal with a crisis that threatens everybody. Everyone seems now to be observing the spirit of the suddenly threatening times and there is a good deal of old-fashioned bi-partisan work between the Congress and the administration. It is refreshing to behold and reminds the venerable and American history buffs of president Franklin Roosevelt’s inspired war-time leadership and presidents Harry Truman and Dwight Eisenhower’s very capable and patient management of the institutions that won the Cold War, almost bloodlessly. Much of this was lost in Vietnam and after president Ronald Reagan led the West out of the bipolar world with the dissolution of the Soviet Union, there haven’t been many crises of this magnitude in the world. The ambience of the past few weeks briefly reminded old-timers like me of the tension of the Cuba Missile Crisis in 1962, when the world seemed on the brink of nuclear war.

It became clear about two weeks ago that doughty South Korea had got the better of the coronavirus and that its spread could be contained, and China has confirmed that, but the government of the people’s republic has been so untrustworthy, no sane person could repose much confidence in anything it said. But foreign observers in China and the renewed output of Chinese manufacturets seem to confirm that the virus has crested there, in the land of its origins. (China was also the fecund source of avian flu and SARS). With these developments and the news that anti-malarial medicine may alleviate the coronavirus, the United States has an opportunity to replicate the path of South Korea, and is moving quickly to develop vaccines and to augment its supplies of emergency equipment and get ahead of anticipated numbers of virus-sufferers. The desperate climate of 10 days ago seemed a mixture of the novelist Nevil Shute’s “On the Beach,” about the extinction of man by nuclear radiation, and the great Dutch tulip mania of 1637, when bulbs of the newly developed tulip fetched astronomical sums. Now there is the purposefulness of a defined objective, not the helplessness of the damned.

Unfortunately, the scientific and epidemiological experts who are creating and executing the public health war plan in the United States, and to some extent their Canadian analogues, take little account of the economic consequences of their recommended actions. Essentially, they want everyone to stay in their homes until everyone who has contracted the virus has recovered.

This would certainly contain the spread of the virus, but at massive economic cost. Some near-normal life could continue even as the virus is brought to heel. Restaurants could be reopened, at a reduced capacity, allowing for distance between patrons. Even theatres and sporting events could be reopened on a similar basis — reduced capacity and, likely, reduced amenities. It would be awkward and rather inadequate, but at least it would not be passivity and surrender, and would sustain some economic activity. There would be some admitted risk for those who went out, but for those who would be prepared to take that risk (of a nasty bout of influenza, not death — if they were in good health to begin with), and there would be many, would raise the morale of the whole society. Small businesses could be operated in the same way, and so could factories, with the same thinning of ranks and precautions. Children are not much affected, not more than by the measles, and some elementary schools could be reopened. The incidence of the coronavirus might be somewhat extended, but the economic consequences and level of public demoralization would be alleviated.

I fear that our Western governments are attacking the deteriorating economy with the methods of 2008, when the crisis was of financial institutions, with the non-commercial mortgages. The consequences of forcing everyone to self-quarantine could take years to heal. Tax relief won’t work with people and companies who aren’t making any money, and direct payments to the whole population, as is envisioned in the U.S., is a bit of a blunderbuss. All businesses should be deemed to be insured for business interruption, even though most of them are not, and their insurers should be authorized to issue promptly to them, a form of specially printed scrip for approximately half the revenue the businesses appear to have lost from this crisis, by comparison with previous years. This scrip would be mandated to be acceptable as currency for basic needs as long as the government considered the crisis was occurring, and the Ministry of Finance would promise to redeem the scrip after the crisis has passed, with some combination of cash, direct deposits, tax credits and conversion to low-yield preferred shares. It is just and sensible for governments to invest directly in sound corporations in temporarily distressed industries, such as airlines and the energy sector. The United States government was an immense shareholder in the U.S. banks in the mid-1930s as a preferred shareholder, as it was in Chrysler Corporation in the late 1970s. In both cases, the shares were redeemed for future profits. This system will work again, though the present Canadian government will have to abandon its suicidal ambition to eliminate the oil and gas industries.

Just as First World War French leader Georges Clemenceau rightly said that, “War is too important to be left to generals,” pandemics cannot be entirely managed by doctors and scientists. The North American economy was in excellent condition when this tempest fell upon it; it must be carried through and incentivized to regain its pre-viral vigour as quickly as possible. The hysteria was excessive and we must not, in our zeal to “flatten the curve” and suppress the coronavirus, amputate our economic limbs; a tidal wave of small business bankruptcies would take painful years to heal. As for Canada’s official Opposition, it should defer its leadership selection until this crisis has passed. Then, perhaps, Rona Ambrose, John Baird, Jean Charest and Pierre Poilievre would reconsider their decisions not to seek the Conservative leadership.