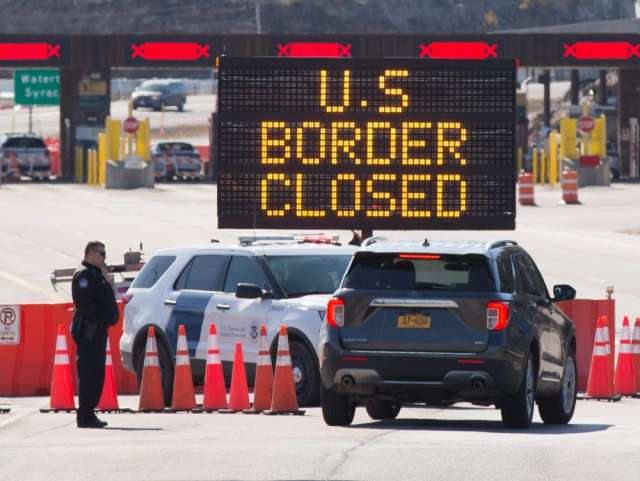 The Canadian government’s management of the coronavirus crisis, if judged by what it does and its leaders say, is completely inadequate. Their relief bill is probably not sufficient in quantum or in efficiency for those unemployed or under-employed as a result of the public health crisis, and the relief for small businesses is also probably insufficiently liquid and too bureaucratic. The closing of the U.S. border is nonsensical. And if the U.S. Army is moved to deploy significant numbers of its personnel to the border, as was briefly suggested earlier this week, it will be a demoralizing, as well as an absurd, event. The last time we had armed uniformed people on that border was when George-Etienne Cartier, as Canada’s first minister of defence and militia, placed the formidable force of 50,000 along the Quebec and New Brunswick borders with the U.S., and near the Thousand Islands and at Niagara Falls and around Windsor, in 1870, to deter the Fenians. These were Irish-American malcontents who wished to repay the British Crown for the Irish famine of the 1850s by seizing Canada. At least there was a legitimate reason for having armed force at the border; there has been none since for 150 years.

Even more regrettable was the brief effort of the federal government to have a stump Parliament, reduced almost 80 per cent in numbers, approve the allocation of unlimited powers for the government to tax, borrow and spend in any way and amount the cabinet might choose with no recourse to parliament until the end of 2021. This was apparently more an act of panic than of usurpation, but was no less an outrage for that. When Winston Churchill was invested with practically absolute powers by King George VI on May 10, 1940, as prime minister of a government of national unity comprising all substantial parties and supported by almost everyone in the country, he was facing world war, which was now almost at the English Chanel and overhead and in the sea lanes. Britain was in a declared state of unlimited emergency, and all legislative authority was delegated to the war cabinet by both houses of parliament except the power to tax. For the regime in Ottawa to ask for even greater and more arbitrary authority to deal with a nasty virus shows both mediocrity of knowledge and judgment in the senior civil service and a painful and disquieting lack of any constitutional perspective or sense of proportion by the prime minister and the minister of finance (who on his record deserves less and not more liberty with the fiscus).

The fact that the proposed measure was hastily withdrawn after opposition objections, especially by Conservative Leader Andrew Scheer, doesn’t offer much consolation. The hero of parliament was Conservative MP Scott Reid, who crashed the session and tweeted purposefully. (His confusion of Henry VIII with Charles I was more than compensated for by his stirring invocation of William F. Buckley “standing athwart history and shouting ‘Stop.’ ”) When a friend telephoned to tell me of this astounding initiative I took the unusual step of watching the CBC to see how the public broadcaster played it. My stupefaction was considerable when this illegal and autocratic proposal was not referred to at all. Whatever its shortcomings, the CBC can usually be relied upon to take any Canadian government to task for completely preposterous acts. The apparent silence could not possibly have been censorship (although if totalitarian fiscal powers had been let through, censorship of the media would be the logical sequel); nor could it have been exaggerated deference to authority. It had to be simple indifference, the opinion of the national broadcaster’s senior news editors that this scandalous development was unworthy of comment.

I wrote above that the government’s management of the coronavirus appears incompetent, and it does, except for the fact that the crisis shows no signs of remotely approaching a scale that justifies the emergency measures that have been taken. At time of writing, in a country of 38 million, we have 37 deaths from about 3,800 identified cases. The public health system is sufficiently sophisticated that if there were significantly more fatalities from this cause, they would have been identified, even if our testing capacity is inadequate to be confident that there is not a larger number of infected people. Of advanced countries with reliable statistics, only Germany has a lower percentage of fatalities among reported cases, about half of one per cent, and the United Sates, which in medical terms is demographically similar to Canada and leads the world in testing, about half a million people by late Thursday, comes third, with 1.4 per cent of cases resulting in fatalities.

If Germany, Canada and the United States are the leaders in limiting mortal coronavirus cases, the Netherlands and the United States are the hero-nations of public policy. The Dutch have refused to be spooked and have not seriously tried to reduce travel or rights of assembly, or attendance at schools and workplaces, though they are trying to protect the elderly and unwell. Yet their fatality percentages are almost exactly the same as France’s, which is on shut-down imposed by the armed forces. The Dutch are reporting only one per cent more fatalities over confirmed cases than the U.K., and two per cent less than Spain and 4.5 per cent below Italy. The Imperial College of Medicine (London) projections that were so widely circulated a few weeks ago, of 500,000 deaths in Great Britain and 2.2 million in the U.S., have been revised downwards by over 95 per cent, in line with the changing public health responses in those countries. Even that reduced level of expected fatalities is surely an exaggeration. There is a case to be made for draconian measures to reduce the overall number of infections and thus deaths, but putting the entire economy into abeyance and immuring the population rather than focusing on the vulnerable may cause more harm than good. America’s status as a hero pandemical nation rests on the administration’s brilliant relief package, which will actually make this crisis a profitable experience for most of those economically affected by it (in an election year), and for pushing for an end to the current social distancing measures, at least in parts of the country, by Easter, April 12. By then the U.S. will have tested over two million people, and all advanced countries should soon have sample indications of the percentage of people who have had the coronavirus without reporting, or possibly even knowing it.

If this pandemic was anything like as dire a threat as it has been claimed to be, the Canadian government’s handling of it would have been an unimaginable fiasco. Rather more than 25,000 people have died from it in the world and that is a great tragedy, but China, the country of origin, despite grossly bungling the first two months of the illness,  and not believable in its officials accounts of events, appears to be largely through it. The world succumbed to a pandemic of hysteria, more than a virus, and it is time to follow the American, if not the Dutch, lead, starting with bringing back the elementary schools. Information from every study thus far shows that children seem largely immune to the virus, so the danger to them is minimal. And although children can be carriers, strict social distancing measures in the classroom, such as those in place in Taiwan, can allow classes to resume relatively unhindered.

Since New York City, as it is in many things, is now the coronavirus epicentre, a metaphor from the 1960s television sitcom “Car 54, Where Are You” comes to mind. Two rather awkward policemen were the principals and in one episode, they accidentally misreported something, and by the time they corrected this with their staff sergeant, the report had shot upwards in the city government, and the two unwitting originators listened with astonishment on the regular radio of Car 54 as the chief of police, and then the mayor, the governor of New York and the president of the U.S. came on the air to reassure the nation. There were skilful simulations of the well-known voices of the last three office-holders (John Lindsay, Nelson Rockefeller, and Lyndon Johnson). One policeman said to the other resignedly: “What are we doing? Is everyone crazy?” The coronavirus isn’t a laughing matter, but when the Canadian government tries to abolish the rights of parliament and U.S. armed forces are nearly dispatched to the Canada-U.S. border, and most of the work forces of the world’s principal countries are hiding in their homes, those questions are reasonable; and someone in Ottawa should try to answer them.