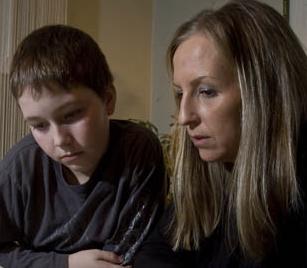 Jan Ravensbergen - Kyle Wozniak and his mother, Nina, leaf through documents in their N.D.G. dining room last month. Photograph by: Dave Sidaway, Gazette file photo
***
Kyle Wozniak, a Grade 5 student at Willingdon Elementary School in the western part of this city, is being allowed to keep going to school in English.
The decision was announced Monday by the English Montreal School Board.
Just over a month ago, a Quebec government administrative tribunal had ruled the 11-year-old was not eligible to attend English school – and ordered him to be switched to French-language classes.
While Kyle had begun his education in French, he transferred to Willingdon, in the Notre Dame de Grâce district, last September.
In ordering his return to the French system, the tribunal cited a lack of proof that one of his parents had received the “major part” of their primary education in English in Canada – a requirement under Quebec legislation that severely crimps access to English-language schooling at elementary and high schools.
Kyle's mother, Nina Wozniak, went to French-language school.
But his biological father attended English schools in Western Canada.
The parents have been estranged since Kyle was an infant. The father would not immediately provide an affidavit to prove his son’s eligibility.
The school board bucked the initial expulsion order, keeping Kyle at Willingdon.
The tribunal subsequently reversed the expulsion after it received affidavits from Kyle’s grandmother, Brenda Romanuck of Alberta, as well as from his biological father, whose name the board did not provide, attesting to the father’s English-language education at schools out west, the board announced in a press release.
“We are elated,” Angela Mancini, the school-board chairman, said in a prepared statement.
However, she added, “sadly, we have so many children who cannot get their English eligibility each year.”
The board, she said, “is losing upwards of 400 students a year since the introduction in 2004 of Bill 104.”
That Quebec law amended Bill 101, the original Charter of the French Language that dates from the late 1970s, so as to preclude students with one year of English private-school instruction from becoming immediately eligible to switch to an English public school in Quebec.
janr@thegazette.canwest.com