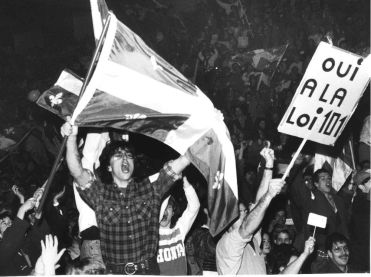 Done with secularism, the Coalition Avenir Québec government is slowly moving into the touchy language issue with Premier Legault saying he's willing to reopen the Charter of the French Language.

QUEBEC — It’s not only up to the government to protect the French language, but the CAQ has not ruled out reopening the Charter of the French Language to reinforce the law, Premier François Legault said Tuesday.

One day after the launch of a fundraising campaign for a foundation devoted to promoting French, Legault said his government is taking the issue seriously despite criticism that it has been too soft on language in the past.

“Actually, my colleague is looking at all the options,” Legault told the legislature in answering a question from interim Parti Québécois Leader Pascal Bérubé.

“We are not excluding opening up Bill 101.

The colleague Legault was referring to is Simon Jolin-Barrette, the minister responsible for the French language in addition to his duties as minister of immigration.

There have been reports that after Jolin-Barrette’s botched reform of the Quebec Experience Program, the government will act slowly on its plans to overhaul the language laws.

Jolin-Barrette was to have presented a plan on language this fall, but it now appears that won’t happen until the new year.

But Bérubé went after Legault in question period, quoting a new Léger poll that shows 70 per cent of Quebecers are worried about the future of the French language. He mentioned another study showing the use of a French-only greeting in Montreal shops dropped from 84 per cent of the time to 75 per cent between 2010 and 2017.

He challenged Legault to go beyond putting more money into programs to help immigrants learn French on their lunch hours at work and move toward new and better laws.

He said the last time a government tried to reform the Charter of the French Language — the old Parti Québécois minority government tabled Bill 14 in 2013 before losing power — the CAQ opposed the bill.

At the time, Legault said Bill 14 was too draconian and created red tape for small and medium-size businesses.

“I hope he has changed,” Bérubé fired across the floor at Legault. “If he has, he can count on our support.”

Legault responded by quoting remarks made Monday by former PQ premier Pauline Marois at the launch of a fundraising campaign to aid the Fondation pour la langue français, which promotes French.

“Yes, governments have a responsibility … but citizens, too,” Marois said.

“When we go into a shop in Montreal, we should insist on being served in French,” Legault told Bérubé.

He added that there are government ministries that do not have a plan for addressing immigrants in French and that’s wrong because “the government of Quebec must set an example that interactions with citizens and new arrivals happens in French.”

“Yes, there are laws which need to be respected,” Legault said. “Ministries must respect Bill 101. It was not done by the PQ. It will be done by the CAQ.”

His did not mention the roaring controversy over remarks made by Jolin-Barrette this month in announcing restrictions on access to English government services by new arrivals.

At the time, Jolin-Barrette said the “historic English minority” would not have any issues with the new rules and would still be allowed English services.

The exact definition of the historic English minority has become a subject of debate — and mirth — with no known criteria.

A hint of the kind of complex debate ahead came last week when Jacques-Cartier MNA Greg Kelley asked Jolin-Barrette to define the historic anglophone community during question period.

“Rights are defined by charters, not by arbitrary lists drawn up by the government. He is in the process of creating two classes of English-language citizens.”

Jolin-Barrette did not take up the challenge, only saying “undermining  the rights of anglophones in Quebec is out of the question.”

Kelley responded by saying if Jolin-Barrette cannot define what he means, he should retract the statement and stop creating angst in the English community.