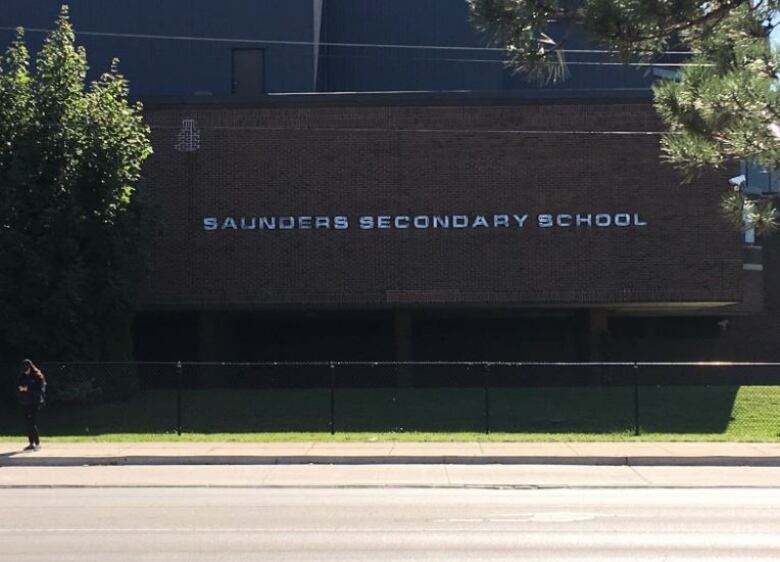 A video of a violent fight between two students at Saunders Secondary School in London has emerged as police, parents and school administrators work to address concerns about racial tensions between the school's Middle Eastern and Indigenous students.

The video was shared with CBC News and shot on the afternoon of Tuesday, Oct. 1 in the parking lot of Westmount Mall, located directly across the street from the school.

At the start of the short video, two young men stand face-to-face while a crowd surrounds them, some egging them on. The students start shoving before one throws a punch and the pair become embroiled in a brawl.

They fall to the ground, with one of the fighters twice using his weight to body slam the other. The force of the body slam appears to drive the other fighter's head into the pavement.

Moments later, one fighter ends up on his back as the other stands above, striking him with punches to the head. The fighter on the ground then curls up into a defensive position as the punching continues. The crowd appears to converge around the two combatants as the video ends.

CBC News played the fight video for Saunders principal Sarah Kahn, who said she found it disturbing and "difficult to watch"

"No person wants to see violence, especially with young people who go to your school," said said. "It doesn't reflect the values of our boards, but more importantly, it's disturbing on a human level."

The fight was a continuation of a dispute between the two students that happened earlier in the day and led to school administrators speaking to both students, said Kahn.

"There was a conflict in the hallways earlier in the day, but certainly there was no indication it was going to turn into the kind of incident that it became," she said. "Obviously we would have done things in a different way if we thought that that was the case."

After the final bell that day, school staff noticed a crowd of students gathering in the mall parking lot and went over to investigate. The video shows one woman in the bottom of the frame standing with two other adults while the fight happens. Kahn confirmed the woman is a member of the school staff, but wouldn't identify her.

Kahn said the adults seen standing beside the fight tried to intervene earlier, but had good reason for not stepping in once the punching began.

"At some point, things reach a point where, as educators, we don't have the ability to step in. That's when we need police support," she said. "At some point we have to be observers so that we can provide information to the police for their investigations."

Police confirmed to CBC News they were called to Westmount Mall that afternoon for what they describe as a "consensual fight." No charges were laid. Police said there have been no incidents at the school since the Oct. 1 fight seen on the video.

Kahn said the students who fought have been disciplined, but wouldn't say how. One of the students in the fight was treated at the scene by paramedics for minor injuries, she said.

'Happens all the time'

CBC News showed the fight video to a group of students near the scene of the fight on Wednesday.

"It happens all the time," said one student. Another said it's the result of a years-old dispute between the school's Indigenous and Middle Eastern students.

Kahn denied the fight was driven by underlying racial tensions.

"Conflict is something that we deal with every day in schools and I don't think it's fair to say it is just two groups that are in continuous conflict with each other," she said. "I don't think that's an accurate description."

About 200 Saunders students — roughly 10 per cent of the school population — identify as Indigenous.

Representatives from nearby Indigenous groups have expressed fears for their children's safety. The school asked for an increased presence of London Police's school resource officer. Kahn said off-duty officers have also been hired to increase security at the school since last week's fight.

Racial tensions erupted into fisticuffs at a parking lot across from Saunders Secondary School in London, Ont. on Oct. 1, 2019. 2:10

Representatives from the area's Muslim community met with the school board to discuss the issue.

"This is unacceptable, it should not be happening," said Ali Chahbar, London Muslim Mosque's outreach coordinator.

He said Muslim and Indigenous groups have much in common and have enjoyed good relations in the past. Chahbar is a former Saunders student and often speaks for the Muslim and Arab community in London.

"I hope it's just a matter of bringing people to their senses by talking and fixing things," he said.