US: Kicking Vietnam Syndrome Once and for All 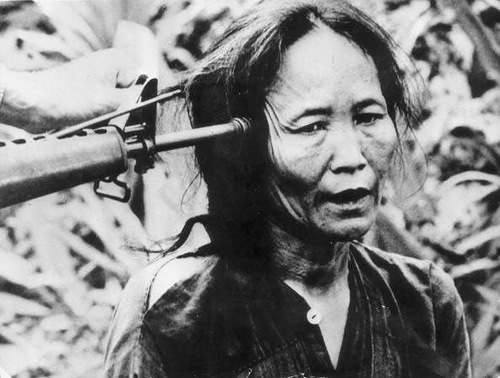 The US is set to roll out a 50th anniversary commemoration of the Vietnam War. A $30 million program is on the way to rewrite its history.
The new commemoration website (vietnamwar50th.com/) was launched with archives and various reference materials. The US young people need to be explained once again who and why fought in the faraway land. The history of the events preceding the intervention goes as far back as September 2, 1945 – the day Ho Chi Minh read the Declaration of Independence of Vietnam and announced the end of French rule. Some time passed and the US replaced France in its former colony.
The website mentions the date of September 26, 1945. That day Lt. Col. Albert Peter Dewey was the first American fatality in French Indochina killed in the early aftermath of World War II. He arrived on September 4, 1945 in Saigon to head a seven-man OSS (Office of Strategic Services later - the CIA) team «to represent American interests» and collect intelligence. He arranged the repatriation of Allied POWs, including 240 Americans, from two Japanese camps near Saigon. It’s all clear: an American officer on a humanitarian mission killed by Vietnamese…
The Fact Sheet’s statistics of Vietnam War inform that the US sent the most educated soldiers to the war. The visitors are offered a list of US war allies: Australia, Thailand, New Zealand, the Philippines and South Vietnam.
The United States Vietnam War Commemoration website omits something important – the history of post-war protest movement that hit the streets of US cities in the 1960-1970s. Nothing is said about the persecution of anti-war activists many of whom were war vets.
There is no information on half a million deserters, those who did not want to carry out the criminal orders of military command. In an astounding statistic more Vietnam veterans have committed suicide than were killed in the war.

In the memory of an average American the Vietnam War is associated with the wide-scale anti-war movement. Only on November 15, 1969 Americans took part in peace initiatives across the United States to protest against the continuing war in Vietnam. About 250,000 demonstrators gathered in Washington D.C. to make their voices heard. They protested the killings of Vietnamese by US military. Today the US needs to sanitize the memory.
According to Marjorie Cohn, a professor of law at the Thomas Jefferson School of Law, San Diego, California, and a former President of the National Lawyers Guild, one of the most shameful legacies of the Vietnam War is the US military's use of the deadly defoliant Agent Orange, dioxin. Despite the continuing damage and injury wrought by Agent Orange, the Pentagon website makes scant mention of «Operation Ranch Hand». It says that from 1961 to 1971, the US sprayed 18 million gallons of chemicals over 20 percent of South Vietnam's jungles and 36 percent of its mangrove forests. Tens of thousands of US soldiers were also affected. It has caused birth defects in hundreds of thousands of children, both in Vietnam and the United States. The use of substance is currently affecting the second and third generations of people directly exposed to Agent Orange decades ago. Certain cancers, diabetes, and spina bifida and other serious birth defects can be traced to Agent Orange exposure. But the website and organizers of commemoration events wisely shy away from citing the devastating effects of that spraying.
The website goes around the fact that Americans weren't the only ones dying. Between 2 and 3 million Indochinese - in Vietnam, Laos and Cambodia - were killed. War crimes - such as the My Lai (part of Song My village located in South Vietnam's Quang Ngai Province) massacre - were common. In 1968, US soldiers slaughtered 500 unarmed old men, women and children aged from 1 to 82 years old in the Vietnamese village of My Lai. Yet the Pentagon website refers only to the «My Lai Incident», despite the fact that it is customarily referred to as a massacre. Only one US serviceman faced justice to be released from prison after only three years spent behind bars.
The ongoing 50th anniversary commemoration events makes one see that the goal to accomplish envisions complete revision of causes, events and outcome of the «dirty war».
This is a planned review of the historic past that coincides with the intensification of US global expansion efforts.
George H.W. Bush hit the nail on February 28, 1991, just hours after the fighting in the Persian Gulf stopped. Then he gave the public a fleeting glimpse of his secret agenda when he celebrated the ground war victory by blurting out the seemingly incongruous declaration, «By God, we’ve kicked the Vietnam Syndrome once and for all». Since then the US presence in the world has been expanding to encompass the countries of three continents (Somalia, Yugoslavia, Afghanistan, Iraq, Libya and Syria…).

H.D.S. Greenway has been a journalist for 50 years and recently retired from the Boston Globe after a distinguished career, most recently as its editorial page editor. In 2008 he lambasted the attempts of some historians to revise the Vietnam War to make it look more palatable in his piece Revisionist Approach to Vietnam published by the Boston Globe. But one article failed to reverse the trend.
The Americans’ vision of the war in South East Asia has always been complex and ambiguous. Why is it today that the issue of making the war look like a heroic deed has come to the fore again? What has made the commemoration events take place in practically all states in the period from September 2014 till January 2015? Is it done to prepare America for new wars?
The ongoing revision of Vietnam War appears to be part of the plans to influence public opinion in the US to make it ready for new military conflicts.
The neocons have defined the US foreign policy no matter who (Republican and Democrats) held the power. They perceive the emergence of multipolar world as a personal drama. That’s why US Deputy Defense Secretary Robert Work believes that the USA and its allies need to be prepared to respond militarily to Russia's and China's actions. In his speech at the American Council for Foreign Relations Work said that the US should actively use diplomatic means in relations with Russia and China, but one should also bear in mind the possibility of a military response to any action «taken against our allies» He stressed that Washington should find ways to deter Moscow and Beijing. «Russia and China clearly are staking out their position in their near abroad. This is one of the things we're going to have to work out over the course of the next several years, on what they consider to be areas of their vital interest», the official said.
The United States Special Operations Command says ditto. It recommends preparing for waging «hybrid wars» in multiple theaters operations. NATO Secretary General Jens Stoltenberg has mentioned a possible confrontation with Russia. With such sentiments taking over the time is propitious to free Americans from the burden of moral responsibility for what their country did in Vietnam.
A military expansion is incompatible with the feeling of guilt for the deeds of the past. There should be no remorse to make a military intervention succeed. An average American should support any military adventure in any part of the world. That’s the goal pursued by Washington.