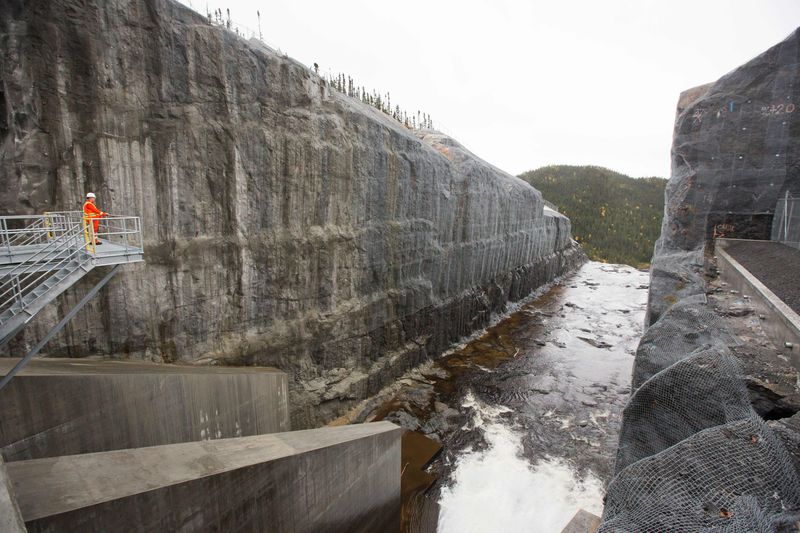 Dotted within the sparsely populated forests and tundra of northern Quebec is an existing technology that could hold the key to slashing greenhouse-gas emissions created by powering the dense cities and suburbs between Boston and New York, at the lowest possible price. All that’s needed is a handful of new transmission lines, according to researchers at the Massachusetts Institute of Technology, and the existing network of hydroelectric dams from the Hudson Bay to the St. Lawrence River could serve as a giant battery for the U.S. Northeast.

Quebec’s dams ship some power south across the Canadian border, supplying 15% of New England’s electricity right now. But the key to driving down emissions from both power grids lies in sending more electricity back and forth. Solar and wind facilities being built in the U.S. would help power Quebec on sunny or windy days, giving hydroelectric reservoirs time to recharge. Then, when the sun falls or the wind calms, the Canadian dams would take over.

It’s similar to the system that has evolved between wind-rich Denmark and Norway, which boasts Europe’s biggest hydroelectric system. Denmark ships excess wind power to Norway, and that energy allows for Norway to refill its hydroelectric reservoirs. When Denmark needs more electricity, power flows the other way.

“Denmark and Norway are a postcard from the future,” said Emil Dimanchev, one of the authors of the MIT study.

Quebec’s abundant hydropower is often seen as a competitor to renewables in the Northeast. But Dimanchev and his colleagues argue that using U.S. renewables and Canadian hydropower together as an integrated system could cut by nearly a quarter the cost of reaching a zero-emission power grid by 2050 for New England and New York State.

“We’re really seeing it as a complement, a partnership between hydro and renewables in the U.S.,” said Dimanchev, a senior research associate at MIT’s Center for Energy and Environmental Policy Research. “The answer is we should use both, at least as long as we want to decarbonize fast and at low cost.”

The Hydro-Quebec utility, which has 63 hydroelectric stations scattered across the French-speaking province, has long aimed to build up its business to the south. The company said decarbonizing the grid will require all of those resources, on both sides of the border. “This study really points to where we’re going—let’s look at this on a regional basis,” said spokesman Gary Sutherland.

The future envisioned in the report does come with a catch. It relies on building enough cross-border transmission lines to carry 4 gigawatts of electricity—requiring roughly four new lines, by Dimanchev’s estimate. But transmission lines inevitably run into resistance.

The New Hampshire Supreme Court last year blocked the planned Northern Pass transmission line that provoked fierce opposition within the state. New York Mayor Bill de Blasio’s plan for a transmission line from Quebec to his city has drawn fire both from U.S. power producers, who say it would depress prices, and environmentalists worried about the impact on demand for building more wind and solar facilities.

The proposed New England Clean Energy Connect line that would carry Canadian hydropower south into Massachusetts won approval from Maine’s Land Use Planning Commission in January, but even that development could be reversed by a state voter referendum this fall.

Sue Ely, a staff attorney for the Natural Resources Council of Maine, an environmental group, said the line would damage the forest and interfere with the migration of some animals. She also doubts it would function in the way the MIT researchers envision. U.S. customers have already signed long-term power purchase agreements for all of the line’s capacity, Ely said, meaning there would be no room for electricity flowing north.

“It would be providing energy whether the sun is shining or the wind is blowing,” Ely said. “It is frustratingly obsolete before it’s even built.”

The company proposing the line, Avangrid Inc., said most of its 1,200 megawatt capacity will be devoted to imports for the line’s first two decades. ``After the first 20 years, depending on energy demand and markets, the line could be used to flow power both ways,’’ Thorn Dickinson, the company’s vice president of business development, said in an email. ``It is possible that during this second 20-year period enough intermittent power will be online to make this arrangement worthwhile.’’